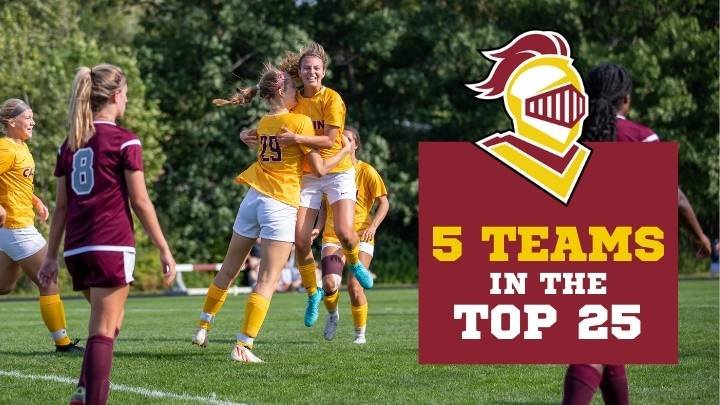 Women's soccer is one of five Calvin fall sports teams to be ranked in Division III's Top 25.

This fall, if you are looking for the Calvin Knights, look no further than the national polls. Five of Calvin’s eight fall varsity teams are inside the Top 25 in the country. Women’s volleyball is #5, men’s soccer #10, women’s soccer #13, and both the men’s and women’s cross-country teams are ranked #23.

While having five of eight teams in one season inside the Top 25 seems impressive – it’s not unusual for Calvin. In fact, the Knights are consistently among the best Division III programs in the country. The National Association of Collegiate Directors of Athletics award the Learfield Director’s Cup each year to the top athletics program in the country. Since the award was started for Division III in 1996, Calvin has always been a Top 30 program—that’s 26 years running.

“We are one of six schools to have finished in the Top 30 of Learfield every single year,” said Noah Toly, provost of Calvin University. “Learfield is a measure of how competitive you are compared to more than 400 other schools in all the sports you offer.”

The other five schools who have finished in the Top 30 every year include: Middlebury, Amherst, Emory, Ithaca, and Williams College.

“That’s great company to keep, and our athletics program has kept that company for a long time,” said Toly.

Toly notes those other five institutions as being both excellent athletically and academically, something that is also true of Calvin. Again, look no further than the data.

Calvin University’s athletic program produces more Academic All-Americans than almost all Division III institutions and ranks 19th all-time when considering all divisions. MIT, Notre Dame, Stanford, and the University of Michigan are among the company Calvin keeps near the top of that list. While these are individual awards, Calvin’s teams also stand out. This past academic year, 16 of Calvin’s 21 varsity athletics teams that compete in the Michigan Intercollegiate Athletic Association (MIAA) maintained a cumulative GPA of 3.3 or better, qualifying them for the MIAA Team GPA Award.

While the Division III philosophy is that athletics is part of a well-rounded college experience, Calvin University’s excellence in both academics and athletics is out of its league. And … there’s more.

“The integration of faith is the plus-plus,” said Jim Timmer, athletics director at Calvin University. “It is not an add on, it is central to the entire experience here, including athletics.”

“It is hard to find an athletics program as excellent across the board as Calvin’s,” said Toly.