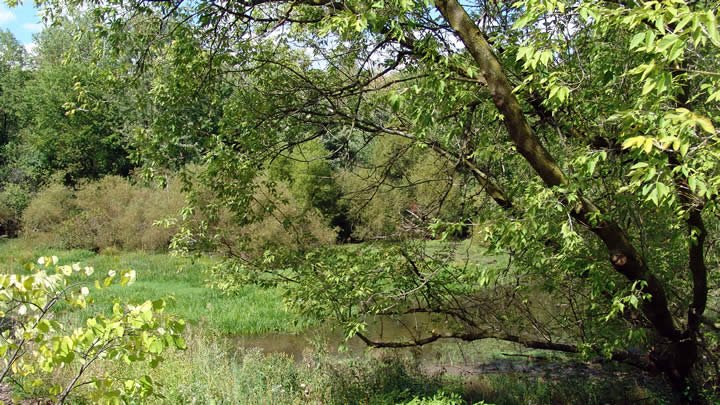 Before it was Calvin’s campus, the land on which the college resides was farmland. And the nature preserve was where the farmers went to get their firewood. Consequently, there wasn’t much nature left standing by the 1930s. But left undisturbed, the forest eventually began to grow back, and Calvin’s biologists have been watching.

Calvin’s biology department has been observing the woodlot’s regeneration into a full forest since 1974 through tree censuses. Biology professor Randy Van Dragt has been a part of the project since 1984.

Every five years, Van Dragt and a team of students and other professors head out into Calvin’s woodlot to survey the 3-4,000 trees in the preserve, recording each tree’s location, type, diameter, health and height. Although Calvin is one of the only institutions to perform tree censuses, Van Dragt says there are many benefits to collecting this kind of data.

“We can certainly better understand how this woodland regenerates itself,” Van Dragt explained. “Part of the purpose of our study is to see which types of trees decline as the woodlot matures and which ones become more prominent.”

Typically, Van Dragt would expect a fully matured forest to feature more American Beech and Sugar Maple trees, but the urban backdrop of Calvin’s woodlot may lead different trees to flourish than would in a more isolated woodlot. The only way to find out if the urban setting influences the growth in the woodlot: tree censuses.

In tracking the trees, the researchers can also track the impact of pathogens that infiltrate the forest. While they were doing the census this summer, Van Dragt and his team of student researchers found a new pathogen that may threaten Calvin’s American Beech population. The new fungal pathogen could eventually kill off a significant portion of Calvin’s American Beech trees.

Van Dragt hopes to work with student researchers to figure out how many Beech trees the pathogen has already infected and consider options to contain the pathogen. However, he says that some pathogens are beyond containment. That was the case with the Emerald Ash Borer, which wreaked havoc on Calvin’s Ash trees.

In addition to helping Calvin pick up on pathogens, in the future, the tree censuses may give researchers a better understanding of the impact climate change has on suburban woodlots.

“I’m hoping if we can continue this study in the future, we’ll get an idea of how climate change influences the forest,” Van Dragt said. “Certain pests do better in a warm climate, so that could influence the composition of the forest.”

After this year’s survey, Van Dragt and his team will have an even more thorough picture of the woodlot than before. Forty years after the first tree survey, the group decided to expand the census. In previous years, the census only included larger trees, but this time, they also looked at the smaller saplings. In addition, they looked at a larger area in the census than in previous years.

Helping with the expanded survey this summer was a unique career opportunity for senior biology major Jon Knott, who will continue to assist Van Dragt with the project this fall.

“Helping with the tree census was the top of my list as far as summer research goes. I’m hoping to do something similar in the future, so it definitely caught my attention,” Knott said.

Knott is looking at attending grad school for a degree in a field related to either forestry or ecology.

“It’s been really cool seeing how some of the species were really common when the censuses started, but then died out as the forest matured, whereas for others, there’s a lot more of them now. It’s cool to see how individual trees have grown out over time, too,” Knott said.

Knott will be analyzing the data from the summer in greater depth this fall.

“It’s kind of interesting to just have that chance to get to know the forest. I’d walked through it before, but now I’ve actually gone in and measured all these trees. I can identify them by name.”