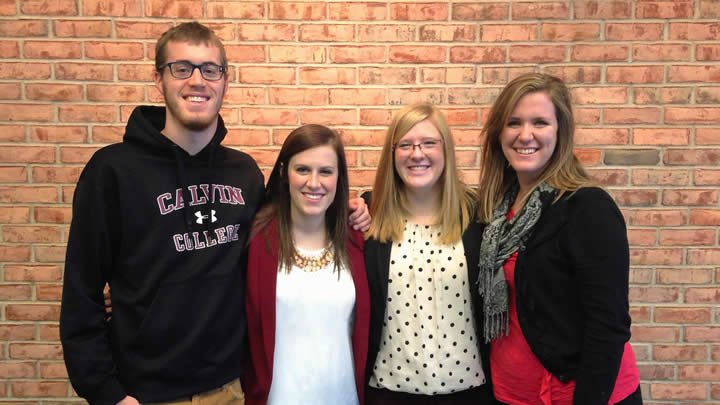 “By Grace teaching me to live life to the fullest, I want to live my life trying to enable other people to live their lives to the fullest,” said Calvin junior Hannah Kwekel about her special needs little sister. Hannah and Grace and the subjects of a video produced by Calvin students as part of the Ford Motor Company “Go Further” Challenge.

Calvin students Lori Dykstra, Kara Venema, Kayla Danahy and Brad Feltz have entered the Ford Motor Company “Go Further” challenge. The challenge is a test pilot for a competition that Ford will roll out this spring. “We were kind of the guinea pigs,” said Danahy.

The challenge for these communications students was to make a documentary of a Ford vehicle owner who went further in some way. “The only parameters from Ford were that the subject had to be a Ford owner or employee with an inspiring story,” said adviser to the group and Calvin professor Phil de Haan.

This project was taken on by the student leadership of Calvin Public Relations Organization (CPRO), a student-led organization.

De Haan called the competition, “Really fantastic for students. There were a lot of twists, turns and bumps along the way. They would think they were going one direction and have to change.” The students found this aspect challenging but good. “As hectic--and I don’t want to say rushed—but rushed this has been, it’s been a really excellent learning experience. And it gave us a taste of what life after we graduate will be like,” said senior group member Kayla Danahy.

After finding a subject and then filming and editing their two minute video, the group presented it to Ford Motor Company for feedback. The group found the company members friendly but daunting. “It is intimidating because they have so much more experience than us,” said Danahy.

For their video, the group told the story of Calvin student Hannah Kwekel and her relationship with her sister.

“Another thing that made it difficult was not only did we have to find that person but they gave us only three weeks to find the person and film the documentary. Then we had to get it all set and ready to go to present to them,” said strategic communications major Kara Venema.

De Haan commented that choosing a subject was challenging because of the vast amount of inspiring stories. “The staff and students here [at Calvin] have big hearts and make a difference in the community in many different ways.”

Narrowing down Hannah’s story was also difficult. “We developed this vision for the documentary and how she’s inspiring. Because she’s inspiring in so many ways we had to choose angles,” said Dykstra.

The competition is based on the number of views that each video receives. To aid the student’s contest chances, watch the video.

The winners of the contest receive a monetary amount that would go towards CPRO’s budget allowance. The students would also get the pride that comes with participating in and then possibly winning a competition with a large international company.

“I think it’s cool that this opportunity came to us here at Calvin,” said Dykstra. “It’s something very applicable to what we’re studying and what we want to do in the future but also something that we could find meaning through.”