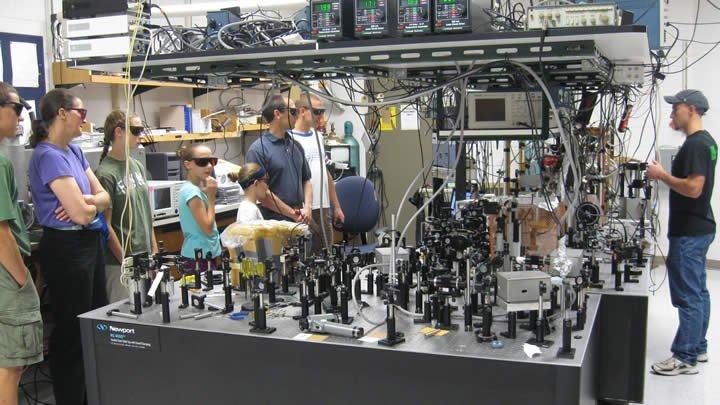 This summer, student researchers in Calvin’s science departments are working with professors on research about everything from the impact of UV light on the epithelial cells in our eyes to interactions between insulin and DNA. On Wednesday, July 23, the public got a glimpse of their work through a science research open house.

From 2:30 to 5 p.m., visitors of all ages streamed through the halls of the Science Building, popping into laboratories to learn about the research students and professors are conducting this summer. The researchers abandoned their microscopes and beakers for a few hours to answer questions about their research and do some live demonstrations for the visitors.

While biology professor Dave Warners showed visitors an array of native plants in the greenhouse, Calvin junior Deanna Geelhoed explained what she and the other students working with Warners are doing this summer:

“We work with the Plaster Creek Stewards to protect areas from stormwater by planting native gardens that can soak up the stormwater.”

Geelhoed explains that stormwater is one of the leading causes of water pollution in the Grand Rapids area and that native plants that soak it up keep the water from reaching our waterways. Warners and his team are also experimenting with a prairie garden of native plants on Calvin’s campus this summer.

“We want to show that there are ways to have a beautiful lawn with natural and native grasses, so we’re testing what grows best,” Geelhoed said.

Around the corner from the greenhouse, another set of student researchers is assisting chemistry professor Larry Louters with his research on the regulation of glucose transport in cells. What they find could help us to treat diabetes and cancer. Senior Aimee Vos explained:

A group of students led by chemistry professor Kumar Sinniah is also hoping to learn more about diabetes through their research. They are examining the interactions between insulin and DNA using atomic force microscopy, a high-resolution type of scanning probe microscopy.

“[The atomic force microscopy] lets us pull apart the DNA sequence to see if the insulin bonds to it,” senior chemical engineering major Abby Leistra said.

Leistra explained that learning more about the interaction between DNA and insulin could help us better understand type 1 diabetes:

Down in the basement of the science building, biology and biochemistry major Jodie DeVries works with physics professor Loren Haarsma on research focused on the impact of ultraviolet exposure on epithelial cells in the eye. They hope to figure out why electrical currents in the eye are more active after exposure to ultraviolet light using electrophysiology.

For Devries, the project is a unique opportunity. She gets to learn research methods that most people don’t encounter before graduate school. She’s especially enjoyed learning patch clamping, a technique used to study single or multiple ion channels in cells.

“Patch clamping is definitely more of an art form than a science,” Devries laughs. It’s not very precise, but it’s a good skill to have.”

Haarsma is hopeful that the project will help solve a little piece of the puzzle surrounding cells and ultraviolet light.

“Lots of people are already doing research on [UV light and cells]. It’s a 70,000-piece jigsaw puzzle. We hope we can put together a few pieces. Our piece this summer has to do with how ultraviolet light damages the eyes,” Haarsma explained.

Putting together a “70,000-piece jigsaw puzzle” takes time, so it will be a while before all the implications of Haarsma’s findings are known. The same is true of chemistry professor David Benson’s research. Benson and his student research assistants are looking at the formation and function of tyrosine-cysteine cross-linked proteins.

Benson suspects that the two amino acids bond and act as an antioxidant for a particular protein when the body releases hemoglobin in response to an injury. That would mean that their influence is localized, unlike antioxidants found in chocolate or wine. If Benson’s theory proves true, the bond between the two amino acids could be part of the immune response, but it may be years until we know its exact role. Benson said:

“It could take 30 years for us to crack the code [for these amino acids], but we’re getting the research started and laying the groundwork now, so we’ll see what happens.” 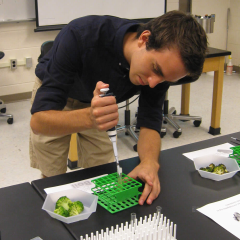 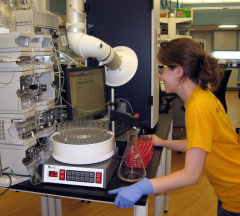 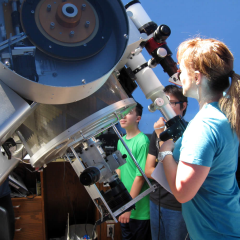