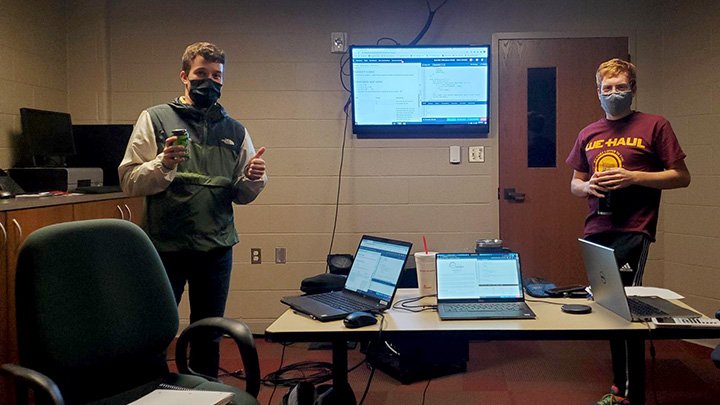 Every hour brought with it a new challenge. It was a new experience for Calvin students.

“No one [at Calvin] had done this competition before, we weren’t even sure how many teams were in it, and that they’d be from all over, all these major universities,” said Arbogast, an electrical engineering student with a Japanese minor.

The trio of electrical engineering students represented Calvin University in IEEEXtreme’s global challenge—a virtual competition in which teams of IEEE (Institute of Electrical and Electronics Engineers) student members compete in a 24-hour time span against each other to solve a set of programming problems.

Calvin’s team, named DreamTeam, was competing against the likes of UC-Berkeley, North Carolina State, and Milwaukee School of Engineering, to name a few. In all … 3,704 schools from 73 countries competed.

Prepared to tackle many problems

With each hour, came a new problem to solve.

“You were judged on a combo of things, from how fast you completed the challenge to how fast the program itself runs, so on two aspects of speed,” said Clark, an electrical engineering student with computer science and mathematics minors. “Also, how much memory the program uses, and how correct the solution is.”

And while the competition was unlike anything this trio had experienced, the problems were much more familiar …

“I was impressed with how much looking over the problems and practice materials I’d recognized it from a computer science class or Zac and Kai would recognize it from an engineering class that I haven’t taken yet,” said Miedema, a junior electrical engineering student with a computer science minor. “Everything we saw was part of course material at Calvin. We felt very well prepared to use what we learned to solve the problems they gave us.”

And so any trepidation the three had about this uncharted terrain was soon brushed away.

“Once we got in and started rolling, we started realizing we were doing really well,” said Miedema.

The team was able to see a scoreboard as they were going, and finished the competition with a strong surge that placed them in the top 10% worldwide, and 14th among all participating colleges and universities nationwide.

“I didn’t expect to do that well,” said Clark.

“I’ve already been impressed by the quality of education at Calvin and how I’ve been able to use the knowledge I’ve gained here in my internships,” said Arbogast, “but I also recognized in this [challenge] that Calvin can be competitive with any schools in the nation. The material we’re learning is both current and valid, and we can use it.”

The competition was a testing ground of sorts for the three. And for the two seniors who will graduate this spring, it was confirmation that they are ready for their fields.

For Clark, his career pursuit is fulfilling a childhood dream he first verbalized at a Lego convention in eighth grade. “Someone had built a machine that would take colored balls and sort them and it had a whole bunch of robot arms and stuff. I remember thinking ‘that is so cool, I want to do that someday,’” said Clark.

Several years later after having taken a domestic and an international flight, his wonder turned to the sky. “I was amazed that this gigantic metal tube could keep itself in the sky and fly, and so my interest started to point toward aerospace engineering.”

He’s still passionate about aviation-related engineering and may continue to pursue that path. For now, an internship at Calvin has already led to a job offer from DornerWorks, an engineering firm in Grand Rapids.

For Arbogast, he’s always enjoyed his STEM-related classes. And he likes designing and building things. He also has an interest in working in Asia in the power grid. His internships at Calvin are power-related, and combined with his engineering courses, he’s gaining much relevant hands-on experience in his field. But he says classes outside his major are also helping set him up for long-term success.

“It’s all the things that we need to be successful engineers that don’t just lie inside of engineering,” said Arbogast. “But, the writing skills especially. The skills I developed in classes not in my major, but through core. This summer those skills were super helpful as I had to document a lot (for my engineering internship) and so those writing classes helped with accurate documentation and with good grammar.”

At Calvin, he was also able to combine both his love for engineering and Japanese culture, by having a Japanese minor.

And while Miedema is only a little over halfway into his time at Calvin, he’s already gained a lot of experience.

“I did the engineering summer program in Germany and to have that cross-cultural experience where we learned so much about engineering in a different culture, that element helped prepare me as I look into what I want my work experience to look like,” said Miedema.

Perhaps Clark summarizes their paths through Calvin best: “The things we’ve learned at Calvin are able to help us with a range of things. It’s easy to take what we’ve learned here and apply it elsewhere.”

So, when another problem arises. This trio will be well-equipped to find a path forward.