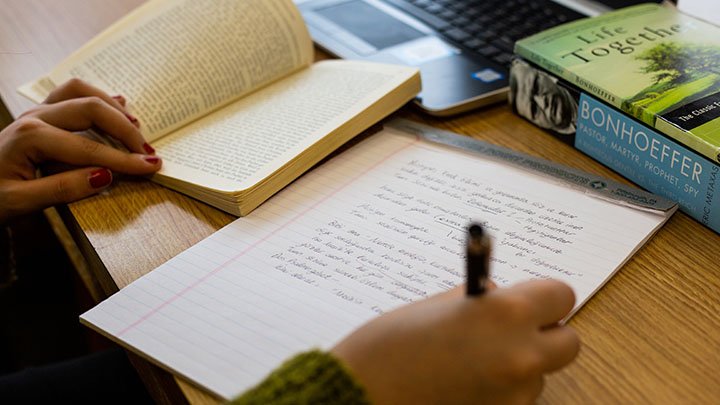 As a young girl growing up in Turkey, Debora Haede had heard of Dietrich Bonhoeffer. She’d seen a documentary about the theologian and German pastor’s life, and had become fascinated by how people, like him, remained faithful, even to the point of death.

But her admiration was personalized, when, in 2007, her uncle and two other men were martyred for their Christian faith inside the publishing house where they worked.

“Having an uncle who did that made Bonhoeffer’s life a reality in a way,” said Haede, a junior studying international relations at Calvin College.

A decade later, Haede is honoring her uncle by doing something for her home country of Turkey that has never been done before: translating Bonhoeffer’s works into their language.

The publishing house where Haede’s uncle worked had approached her dad, who is German, asking if he knew of anyone who could translate Bonhoeffer’s work “Life Together.” Knowing his daughter knew both Turkish and German, he suggested she give it a try, and so with no prior translation experience, Haede took on the challenge.

Discerning meaning in every word

“First time I read the book before I knew I was going to translate it—it was hard to understand. I know I skipped parts that were too complicated.”

She knew the next time through, she couldn’t skip a word. She re-read the book, cover-to-cover, sentence-by-sentence.

“Bonhoeffer has such a strong language, the words he uses. The German he uses isn’t everyday German from today, so as I’m translating I want the Turkish words to be as detailed as the German, which is hard to do,” said Haede. “There were times where I compared it with the English translation as well, because I didn’t know what he meant in the German one. But even there it was interesting to see the changes they made while translating into English … I personally got to understand way more because I had to focus on one sentence for so long.”

Haede started working on the translation in summer of 2017. She finished in December of that same year. And after rounds of revisions and feedback, the publisher asked Haede to also translate “Psalms: the Prayerbook of the Bible.”

“After I read [what I had translated] in Turkish, I got this same feeling when I read it in German, so I thought ‘I think it’s getting there.’”

In December 2018, more than a decade after her uncle was martyred, the publishing house where her uncle worked and was killed was printing copies of the pair of Turkish-translated Bonhoeffer works.

“It has so much for the Turkish Christians … it will be a big encouragement, especially the first chapter which is about community itself. Once you are a Christian in Turkey you are definitely going to be disowned by your family, going to have hard time at your work, so so many people who get to know Jesus, they make that decision, but they don’t get to live freely out their faith or gather with other people,” said Haede. “Just reading this, [hearing] how someone else is highlighting how special it is to be in a community, how that’s a blessing, not to be taken for granted. I’m happy they will be able to read that from Bonhoeffer’s words.”

And Haede’s work isn’t finished. She’s been asked to translate what is arguably Bonhoeffer’s most influential work, “The Cost of Discipleship,” which is described as a modern classic.

“I was already his [Bonhoeffer’s] biggest fan,” said Haede. “But now, when I see him in Heaven, I’ll be like, ‘guess what?’”