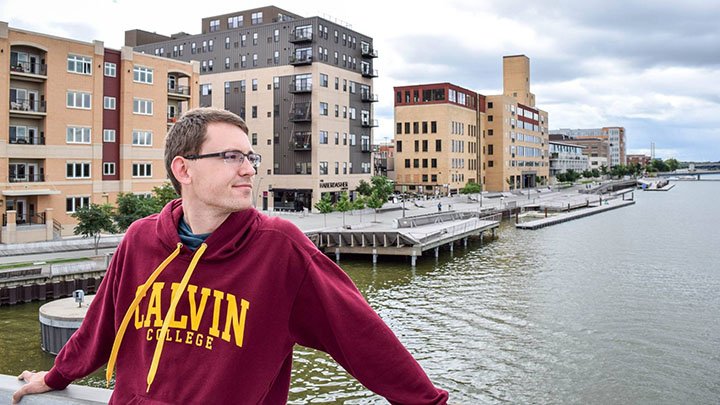 Noah Schumerth '19 is committed to helping his hometown of Appleton find solutions to its zoning code.

At age 10, Noah Schumerth ‘19 was deeply fascinated with cities—his bedroom was covered with posters and pictures of city skylines. After his first visit to Chicago in 2011, though, he realized his fascination was pointing him toward his vocation.

“I fell in love with how lively and beautiful the city [of Chicago] was,” Schumerth recalled. “Since then, I think God has instilled a passion for urban planning inside me. I have a love for cities and all the different people, and how it’s a network of all facets of human life. Our social structures, our culture, what we eat, how we move around—it’s all a display of God’s creativity that He gave humans, to build these networks of millions of people together living in a continuous system.”

Much to his surprise, Schumerth’s first opportunity in urban planning was presented to him upon returning home for summer break of 2016.

Schumerth’s urban development opportunity arose after he responded to an online resource made available in April 2016 for the citizens of his hometown, Appleton, Wisconsin, to vocalize what they would like to see changed in the city’s landscaping. Appleton citizens were able to use a digital map to plot points throughout Appleton and describe the changes they wished to see around town.

When Schumerth got a hold of the link, he went to town—literally.

“I spent an entire Saturday and went nuts [taking pictures] around town,” Schumerth said. “I then posted pictures, links and articles on the page, really focusing on the engineering-related things like street design, public realm and city services. A man named Andrew Dane then sent me a message saying we needed to talk.”

After having lunch with Dane and explaining his concerns for Appleton, Schumerth was offered a volunteer municipal zoning analyst position with Short Elliot and Hendrickson Inc. (SEH), acting as an individual consultant for the city of Appleton’s municipal zoning.

Schumerth explained zoning codes as the municipal policy that dictates the built nature of the city. According to Schumerth, approximately 220 out of the 44,000 municipalities of the United States have been revising their municipality codes.

“Too many zoning codes bar smart-growth just because many of them are dating back to 1960 and 1970, when it looked like sprawl was an okay model of development,” Schumerth said. “I think [municipal code reform] is an important call to the whole country.”

Thus, with Schumerth’s position at SEH, he read and annotated hundreds of pages of street design requirements, building codes, zoning ordinances and other public documents. He also analyzed public input from Appleton residents. He then wrote approximately 75 pages of recommendations, advocating for the improvement of urban environment in Appleton. His overall goal was to create a solution to Appleton’s zoning code that would best meet the demands of the existing public input.

For Schumerth, the issue of sprawl development runs deep in both environmental and social issues.

Schumerth argued that development trends have created automobile dependency, leading to an increase in air pollution and runoff on paved areas, which end up in the local water supply. An increase in pavement produces an increase in an environment’s temperature, since pavement retains heat and a lack of plants equates to a lack of nature’s ‘cooling system.’

“There’s such a division between suburban and urban areas—I think we have this idea that we’re entitled to a never ending continuation of cities, and we’re not,” Schumerth said. “We don’t have enough land to continue building upon sprawl patterns, which is why municipal code reform is so urgent.”

As for social issues, Schumerth believes that sprawled development has led to an increase in classism. “We’ve abandoned the public realm of the street, and that has social equity problems and often segregates people by class,” Schumerth said. “We need to be giving dignity to all in a community, making a welcoming place for every person in society—from someone who works a minimum wage job, to the billionaire in town.”

A vocation with urgency

Through the process of developing these passions for urban development and then putting them into practice, Schumerth is thankful for the guidance he has received at Calvin along the way.

“The biggest benefit to me at Calvin has been the size of the college and the ability to work with professors one-on-one, even as a freshman,” Schumerth said. “They have been great support in the work I’ve been doing, especially Professor Lee Hardy in the philosophy department. Those professor connections have gone a long way in getting me passionate, and giving me the tools I need to make a difference in this field.”

As a geography major and pre-architecture minor, Schumerth’s various classes and professors have helped him become more kingdom-minded, focused on the hope and urgency behind these urban development issues.

“I’m so glad I ended up here [at Calvin] because I have hope—I see how God can work in cities, and how we’ve been given the same power that rose Christ from the dead to go out into the world and bring our world one step closer at a time to God’s kingdom,” Schumerth said. “I think the teaching [I’ve received] in that light has given me that directive in the community to do unpaid work and do things more out of urgency to bring God’s love to the community.”

After graduating from Calvin, he hopes to continue working with municipal code reform, and sprawl retrofit, which is taking socially and economically underperforming suburban areas and turning them into urban development while maintaining historical context.

But in the meantime, Schumerth plans to present a 51-page PowerPoint slideshow to SEH Inc. and select Appleton officials this fall, based on his 75 pages of municipal code recommendations. He will also continue working with the Michigan Congress for the New Urbanism (MICNU) with projects in West Michigan.