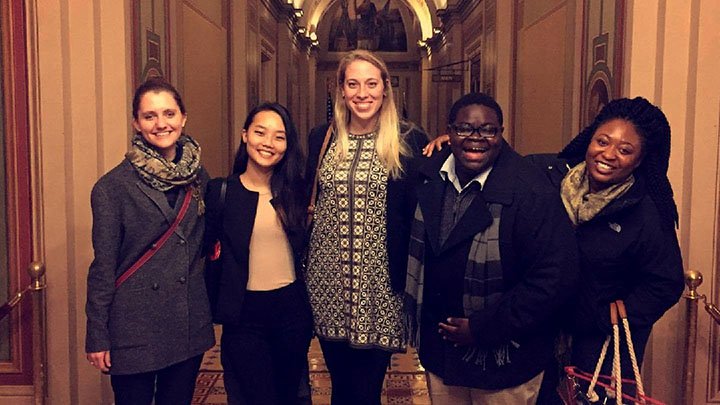 Senior Andrew Oppong poses with fellow Calvin students in the U.S. Capitol Building during their Spring 2017 Semester in D.C.

Even before coming to Calvin, Andrew Oppong, senior and student body president, knew he wanted to make sure he could incorporate a semester abroad into his college experience. After hearing about a former student’s Washington D.C. experience on the Calvin admissions blog, Andrew said he was set on spending the Spring 2017 semester there.

Throughout the semester Andrew interned for the Constitution Project, a nonprofit organization and public policy and advocacy think tank. The organization focused on finding bipartisan solutions to the complex problems in the world, said Oppong. “A lot of things are polarized in our country right now,” he said. “The program works to find solutions that individuals on both sides of the political spectrum will sign off on.”

Oppong worked with the Constitution Project on criminal justice reform, something he said he is particularly passionate about. His main contributions were made to the Oklahoma death penalty review commission, a one-year project. “There were a lot of issues with the death penalty system and the protocol that went along with it,” he said.

Oppong’s internship began towards the end of the project, after months of extensive research, interviewing and writing. “My role was a lot of fact checking, editing, proofreading the 300-page report and reinforcing all of the conducted interviews,” he said. “This was actually an amazing experience because I became very knowledgeable about the Oklahoma death penalty system.”

Seeing hours of work pay off

Oppong said it was exciting that he got to see the whole project and everyone’s hours of work finished out. “There was news coverage during the report’s presentation, and they actually acknowledged the interns’ names,” he said. “This was my first real world experience, but the fact that they were able to attach my name to this document was such an incredible thing.”

“This was such a great experience because most of the people who do work like this are usually in their third year of law school,” said Oppong. “I learned a lot about working with legal documents and the legal system.”

The report did not conclude that the state should abolish the death penalty, rather it said that the errors within the system’s protocol must be resolved. “If you are going to use the highest form of punishment on someone, you need to make sure the system you are using is flawless,” said Oppong.

“I have always been passionate about criminal justice reform,” said Oppong. “This experience impacted me personally because I could see that my contributions actually had the potential to give another person a chance at life.” While Oppong said his work sometimes seemed trivial like fact checking pages or making phone calls, he realized it can make such a difference to a real human life.

Implementing experience into life at Calvin

Oppong said he believes he will take what he learned into his work as student body president. “I learned that there are a lot of perspectives to one narrative,” he said. “When you are making a judgement on someone there is always an underlying story.” When issues arise in Student Senate or around campus, Oppong said he will encourage other students not to attack it from a single viewpoint, rather open it up for discussion and interaction.

“If students want a life changing experience that challenges you and pushes you to a point where you can no longer stay in your comfort zone, you need to go out into the world,” said Oppong. He encourages students to apply for a study abroad program and have experiences beyond their immediate surroundings. “You are part of a larger grand scheme, and these kinds of opportunities help you ask: how can I contribute to making the world a better place?”