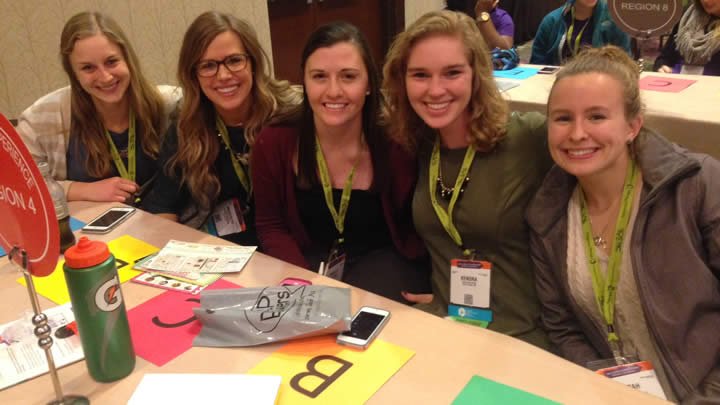 The Calvin College team won the 2015 Knowledge Bowl competition at the ASHA's national convention in Denver.

When it comes to knowledge of speech-language pathology and audiology, Calvin College students are at the top of their game.

The victory came with $1,000 in prize money to be used by the chapter as it sees fit.

About the Knowledge Bowl

The Knowledge Bowl is a "Jeopardy"-style game that uses multiple-choice sample questions from the Praxis national board exam to test the students’ clinical and academic knowledge.

To qualify for a regional spot in the Knowledge Bowl, which is comprised of 10 five-member teams from across the nation, Calvin students had to write an essay explaining why they wanted to participate and what they would do with the prize money if they won.

Senior Chelsea Bischer, Calvin’s NSSLHA president, wrote the essay that helped Calvin qualify for a regional spot. Her essay said her team would use the money to serve the community and to help pay for Girls’ Club, a local outreach to young adults who are developmentally delayed.

Bischer was unable to compete in the Knowledge Bowl because she was presenting a research poster during the competition. Her fellow senior Lauren Schrotenboer participated, along with students Sarah Weiss, Kendra Burmeister, Janelle Agren and Makenzie Kuipers.

Schrotenboer said the competition was intense.

The five categories were Clear My Throat, Back to Basics, Can You Hear Me Now, Mixed Bag and Neurological Disorders. Schrotenboer said the points ranged from 100 to 500 per clue, with occasional Daily Doubles. The students took turns selecting clues, and the teams worked collaboratively on their answers.

Burmeister, who is a second-year student in Calvin’s speech-language pathology master’s program, said the clues were a mixture of case study-based and direct knowledge-based questions.

“One question involved a case study of a client with dementia who also had a swallowing disorder,” she said. “We then had to decide what treatment would be appropriate given the client's cognitive skills and risk of aspiration, or having the food/liquid go into his lungs.”

Schrotenboer said the "Final Jeopardy" round was tense, because they were down 600 points from the leader, the University of Iowa.

“At the end, after we answered the final question, there were about 10 minutes where they were adding up the scores, and all of us knew we had a shot at it,” she said.

She said Calvin’s cheering section chanted, “Do it all, do it all!”—urging Calvin’s team to wager all its points.

“So we bid it all,” she said. “Then we were just waiting and holding hands in anticipation. After they announced [we won], I lost my voice because I screamed so loud. It was just really fun. The adrenaline was pumping the last 10 minutes because we were all so anxious.”

Burmeister said she couldn’t be prouder of her team.

“It's pretty impressive that we won, given that we were up against students from much larger universities who had prepared specifically for this competition,” she said. Calvin’s team did not practice solely for the Knowledge Bowl but was prepared because of everything the students had been learning in class and clinical work.

Denise Makuch, Calvin’s NSSLHA faculty advisor, said it was a privilege for 10 Calvin students to be able to attend the ASHA conference, let alone to win the Knowledge Bowl.

“The ASHA conference is the biggest conference in the field,” she said. “It’s attended by 14,000 speech-language pathologists and audiologists, as well as students. It has cutting-edge information presented by the leaders in our field."

Makuch said the Knowledge Bowl competition was exciting because it was a great way to spread the word about Calvin.

“I brought Calvin mittens for everyone to wear and cheer with, to put Calvin’s name out there,” she said.

Makuch said she is proud of the students’ hard work.

“To compete against that many teams in the nation and win shows that they’re prepared for their future careers and they could apply the knowledge that they’ve learned in the academic setting,” she said. 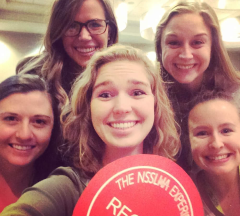 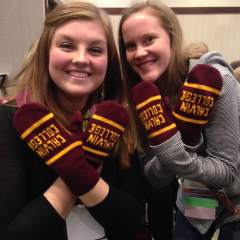