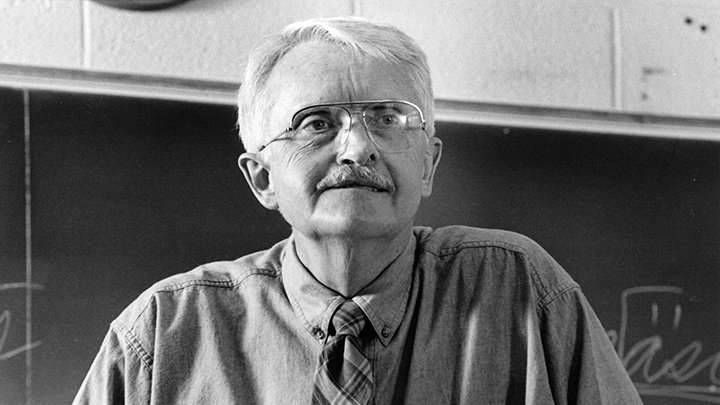 “I don’t guess I’ve ever viewed one’s later years as a time of waiting for death, but rather as a gift that carries with it opportunity and even obligation. I have no illusions what I can bring to ‘society,’ that I can really make a difference, but I would like to spend my days wisely and in Kingdomly useful ways …”

These words were written by Wallace “Wally” Bratt ‘55 in an email to one of his colleagues in 2012—well after his formal retirement from teaching at Calvin University. Bratt, 87, died on Sunday, April 5, 2021. His former colleagues and friends leave little doubt that Bratt used the twilight of his life wisely and in Kingdomly useful ways. For Bratt, it wasn’t hard. After all, he was just doing what he had always done.

“He truly lived out this commitment,” wrote Karin Maag, the recipient of that 2012 email from Bratt, and the director of the Meeter Center at Calvin University. “Wally modeled how to serve as a faculty member with quiet wisdom and integrity.”

He had high expectations

Bratt’s colleagues say he was a master teacher of German. He taught in the German department for more than 35 years. And he had high expectations for himself and his students.

“I can remember once, when going over some homework exercises, he discovered that a number of us weren’t fully prepared,” said Herm De Vries, who was both a student and later a colleague of Bratt’s in the German department. “Wally wouldn’t put up with that. He threw his papers on the desk, walked over to the classroom windows and threw the curtain open, and then stood there silently for a while, trying to regain his composure … Wally took learning dead seriously; and as his student, you had better take your work seriously too. Learning mattered. Studies mattered.”

It’s a reason why he received Calvin’s most prestigious teaching award in 1994, the Presidential Award for Exemplary Teaching, which is a testimony to the fact that the heart of a Christian liberal arts university is the teaching by its faculty, who embody the goals of forming the Christian mind and shaping students’ lives.

But, as much of an honor as it was for Bratt to receive this award, he was never looking for recognition. In fact, his life was all about helping others and their work shine.

He had a servant’s heart

“Though Wally himself did not publish a lot of scholarly articles, he was an exceedingly gifted writer. Many a colleague would come to Wally with their drafts of articles, essays, or manuscripts. Wally would work magic on them,” said Herm De Vries. “Wally also ghost wrote more things around this place, I think, than anyone will ever know. He was a gifted editor and a gifted stylist in his own right. He wrote with an elegant clarity and simplicity, and he helped others to achieve that too.”

“Wally was supportive, always helpful, eager to listen, and happy to celebrate the successes of his departmental colleagues,” said Barbara Carvill who taught with Bratt for 21 years in the German department.

In short, he cared about people.

Mike Van Denend saw that first as an 18-year-old freshman on the track team back in the 1970s.

“Wally was not a cheerleader whose voice you heard over everyone else. He was the one who quietly walked up to you as you slowly made your way around the edge of the track after a disappointing race. From the beginning, Wally embodied empathy. He instinctively knew when a kind or encouraging word would lift your spirit,” said Van Denend, who experienced this gift decades later when he served as alumni director.

“I can’t count the number of times he came into my office, sat down, and said softly, ‘Aw, now Mike, how are you and how is your family? How is your work going?’ and he wasn’t going anywhere until he had the full story.”

“Wally was such a kind-hearted person,” said Renee De Vries, who worked as an administrative assistant for the German and French department while Bratt was teaching. “Long after he retired, he always checked in with me to make sure I was doing okay.”

“He was a constant and consistent voice of encouragement to me in anything I undertook,” said Herm De Vries.

“Wally was a big basketball fan and I’d like to think a big fan of mine,” said Kevin Van de Streek, former men’s basketball coach and currently a faculty member at Calvin. “We met when he just stopped by my office in my second year here. He’d stop by my office from time to time ever since to tell me what a great job I was doing and how he loved how I worked with the team. He’d ask about details, defense, substitutions, etc., but always in the most kind and encouraging way.”

“He believed in God, but he also believed in you, in your ability to use the gifts given you to redeem another corner of the Kingdom,” said Van Denend.

“Such an encourager. So compassionate. When he asked how you were really doing, he then gave his full attention and took the time to listen,” said Marjo Jordan, assistant program manager for the Calvin Academy of Lifelong Learning (CALL).

“Wally was a first-class listener,” said Herm De Vries. “He truly listened to you when you spoke. He heard you. This was one of his great gifts.”

“He taught me how to ask good questions and how to care for the students as persons and not just as learners. He had a special heart for troubled students and helped many through rough times,” said Carvill.

“He had a humble spirit and servant heart. I remember him telling me about his regular visits to his two very elderly aunts who each were suffering from dementia,” said Maag. “He wasn’t looking for compliments, he just wondered to me what he could do to support them in the last period of their lives.”

He never stopped teaching or learning

And the beauty of it all is that Bratt never really retired from teaching or learning. While his official teaching career ended in 1997, he continued on as one of the founding members of the now thriving CALL program. He served as its curriculum director for 15 years and as an instructor of 18 courses.

“Wally was a real strength to the CALL program from its foundation,” said Uko Zylstra, who is the current curriculum director for CALL.

“He was a gentle and caring man with a tender heart,” said Sonja De Jong, program manager for CALL. “His contributions to the CALL program were instrumental in creating a strong and deep program of learning.”

He invested in people

To sum up Bratt’s legacy at Calvin: it’s the investment he made in people.

“Thousands of German majors and other Calvin students who had the benefit of his teaching could not help but be changed by his Christlike manner,” said Van Denend.

That was apparent in 2006 when his former students by the droves wrote reflections about their former professor when he won the Faith and Learning Award, which annually honors a professor who has made a significant impact on Calvin students in training them for a life of service in God's Kingdom.

While Bratt was able to experience the joy of receiving this honor, his greatest joy likely came on Easter Sunday 2021 as he anticipated hearing these words: “Well done, my good and faithful servant.”

“He loved his family, he loved following Calvin athletics, he cared deeply about his co-workers and took the time to walk alongside of them through victories and defeats,” said Van Denend. “A saint that God allowed to be among us for a time. May we follow his example.”

“There are some people whose gift it is to touch other people in their lives—to make a mark on others, to guide others, to have a lasting influence on others. There are quite a few of such people around Calvin, but Wally stands out,” said Herm De Vries. “As I write these words, all the times he’d come visit me in my office are flooding into my memory. And I miss him. How grateful I am to have been a student of Wally’s and later a colleague. I will treasure that forever.”

Wally was preceded in death by his beloved wife, Marianne. He is survived by his children, Doug and Diane Bratt, Ron and Sue Bratt Cok, and David and Margaret Bratt; his ten grandchildren; five great grandchildren; and his siblings and siblings-in-law. There will be a private graveside service for immediate family, to be followed by a memorial service on Saturday, June 26 at 11 a.m. at Calvin CRC (700 Ethel SE, 49506). The service will also be available online. Memorial contributions may be made in his name to the Wallace and Marianne Bratt German Interim Abroad Scholarship Fund at Calvin University (just note the designation) or the Calvin Church Family Assistance Ministry.

Bratt’s legacy is also seen in the German Interim Abroad (GIA). Herm De Vries recalls going on GIA as a student in 1986, when the trip hit a record number of 45 students.

“Wally led this trip by himself,” said De Vries. “I still can’t believe that he led that group as the sole instructor; that would be unthinkable today. This was pre-internet, pre-cell phone … Somehow, everywhere we went (and we moved around a lot) Wally had a circle of friends and acquaintances who welcomed our group, showed us unbelievable hospitality. That didn’t just happen on its own. Later, when I joined the faculty here in Germanic Languages, I came to see just how much work Wally and his colleagues had put, over the years, into cultivating relationships and friendships in Germany. Wally did that because he loved and respected the people there. And they reciprocated. Wally (along with Barbara Carvill and Jim Lamse) taught me more about hospitality and being gracious guests in foreign lands than I ever could have imagined.”