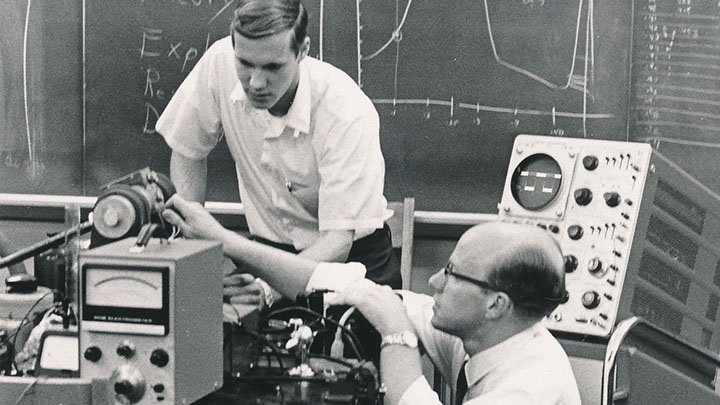 Vernon Ehlers taught in the physics department at Calvin College for 17 years.

Vernon Ehlers is widely remembered for his influential political career: he served for 16 years as a U.S. Congressman and 11 years in Michigan’s state legislature before his retirement in 2010.

It was, though, his “first career” of teaching physics that propelled him into his more prominent role later in life, he once said.

“My life was influenced by my years of teaching at Calvin,” Ehlers said in an interview in 1996. “Interacting with the gifted and committed faculty and with the students I taught really determined and shaped my philosophy of life, a life of service to others.”

Ehlers, who spent 17 years as a respected physics professor at Calvin, died on August 15. He was 83.

Ehlers first came to Calvin as a student in 1952 from Edgerton, Minnesota. After three years of rigorous undergraduate preparation, he transferred to the University of California at Berkeley, one of the country’s leading institutions for the study of physics. There he continued on, earning his PhD in physics in 1960.

A career of service

He joined the Calvin faculty in 1966, where he served until 1983, when he was elected to fulltime public office in the Michigan House of Representatives and then the Michigan Senate before winning a special election in 1993 to fill the unexpired term of the late U.S. Rep. Paul Henry, another longtime Calvin professor.

After some time in public office Ehlers said, “Long ago I went into teaching because it’s personally rewarding, and it’s for the benefit of others. Now I’m applying the same approach to my service in Congress. I regard it as Christian service.”

Calvin physics department chair Matt Walhout, who has been working on an archival research project on the life of Vern Ehlers said, “From start to finish, Vern’s career was animated by the Reformed outlook that Christians need to be a blessing to people in the world around them.”

The scientist-turned-politician took an active role in many science-related legislative issues, especially when it came to protecting the Great Lakes. He was also a champion for math and science education.

Ehlers, who was named a Distinguished Alumnus of the college in 1996, liked to say that when he first served in the U.S. House, he was one of only two research scientists and the only physicist since Benjamin Franklin.

“His big passions were all tied to his Christian vocation as a scientist,” said Walhout. “He was interested in science policy, science education and the environment. Vern was one of the earliest adopters of environmental causes within the Christian Reformed Church.”

Walhout added, “Vern was at the ground floor of a number of initiatives that are still with us today. He was visionary.”

Ehlers’ influence can still be felt at Calvin, Walhout said. “When he came from Berkeley he tried to bring some higher education ideals back to Calvin.”

Ehlers chaired the Faculty Organization Study Committee in 1971, which advanced the cause of faculty governance at Calvin and helped establish the college’s current administrative structure.

He was also behind new initiatives within the sciences at Calvin. “He did some of the initial work in establishing special classes that teachers could take in science to help teachers teach science better,” Walhout said.

Even before he moved into politics, Ehlers had a vision for serving people who are in the cracks of the system, said Walhout. He cared about gender and racial diversity and about world hunger.

“His Reformed view of Christian responsibility drove Vern to try to make the world a place where everyone could thrive and everyone’s gifts could be used,” said Walhout. “He is a great model of what it is to serve in a visionary Christian context.”

Other friends and colleagues also heralded the life and work of the former professor and politician.

“Vern Ehlers was an outstanding physicist with a broad range of interests. Everything Vern did was done thoroughly and with a great deal of care. It was always a pleasure to work with him,” said physics professor emeritus Roger Griffioen. “He played an important role in the development of a young physics department into the excellent department it has become. Vern's early concern for STEM education was shown in the very successful physical science course for prospective elementary school teachers which he initiated at Calvin. This was one of the first courses of this type in the entire country, and one strongly encouraged by the American Physical Society.”

Added Rick Treur, Ehlers’ former campaign manager and community service director, “Because he had a servant heart, the person that you saw publicly was the same that he was privately. He wasn’t afraid to reach across the aisle to work with members from both parties to improve lives for his constituents and the nation. He was humble, caring, deeply thoughtful, extremely intelligent with an incredible sense of humor and will be greatly missed.”

Ehlers is survived by his wife, Johanna, his supportive and constant partner; and by his children, Heidi and Bob Rienstra, Brian Ehlers, Marla Ehlers, Todd Ehlers and Mirjam Schaller; five grandchildren and three great-grandchildren. 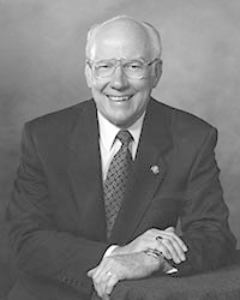 "Vern was a devoted faculty member, alumnus, friend and advocate of Calvin College. He was also a devoted public servant who exemplified the best in civic leadership. We will certainly miss him."

"Vern had strong policy goals and considerable legislative accomplishments, especially on matters of science, technology and the environment. But I’ll remember him more for his way of doing politics, for his legacy as a model of a public official with high standards of integrity, honesty and openness to views outside the party line. That example is sorely needed today."

Kevin den Dulk, chair of The Henry Institute for the Study of Christianity and Politics at Calvin College