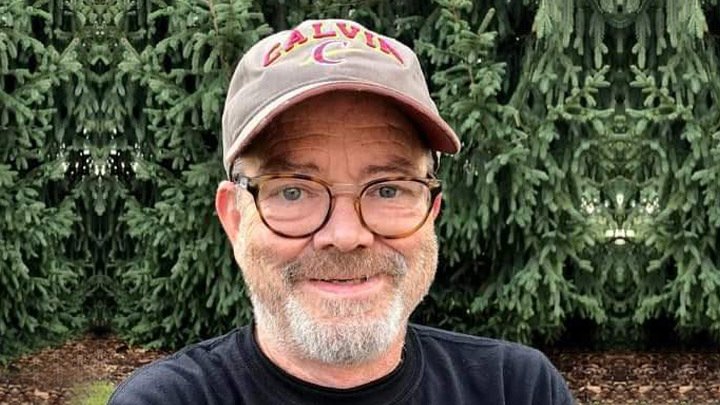 Tape outlines of dust pans and brooms in closets throughout the Calvin University campus tell a much deeper story than one might expect.

This fall, Steve Schuitema started his day well before the sun came up. He’d create a list of things he needed to do for the day, organize it, and then he’d grab his green golf cart from the basement of Heyns residence hall and head out for a full day of behind-the-scenes service to the campus.

The tape in the closet was to make everyone’s job easier, to create efficiencies because there was a lot of work to get done.

Supervising students, doing work orders, emptying trash, vacuuming, setting up bleachers, restocking supplies in buildings across campus, and even handling calls for pest control were all on his list.

“He knew how to do a lot of jobs on campus,” said Emily Taylor, Schuitema’s supervisor for the past few years. “He had a full day!”

Schuitema, 61, died on Friday, November 19, 2021. His colleagues who knew him well remember him not for the work he did, but for the heart that fueled his work.

“He genuinely cared about the students and the staff who worked in building services,” said Taylor. “He wanted to make sure their jobs were as easy as possible. That’s our goal as supervisors: to make sure everyone has everything they need to be successful in doing their job, and he lived that 100-percent of the time.”

“As a supervisor, he was kind and understanding,” said Zack Smidstra, a line custodian for one of the residence halls. “When he would check in to see how my crew was progressing in the apartments or dorm hall that we had been assigned, he would always take time to talk with the students. He would ask them how things were going outside of work or share a laugh with them.”

“Steve would take the time to share a kind word with those he worked with,” said Jay Wise, director of college housing and operations at Calvin. “He always asked ‘how are you doing?’”

“He was always really understanding with student workers when they needed time off. He would care about what’s happening in their lives, relating, trying to listen, just being there for people,” said Taylor.

And it was also Schuitema’s work ethic that revealed how much he cared for people. Taylor says he never did a job “halfway,” and when he saw something that needed attention, he didn’t delay, he took initiative and got the job done. The reason? He knew why he was doing the work.

“He cared and loved Calvin and everyone here,” said Taylor. “He was never mad about how much there was to do. He’d say, ‘we are doing this for the students.’”

And while Schuitema’s workdays were packed throughout the week, he was still willing to work weekends if it meant his co-workers didn’t have to.

“He was just ready to go and help in any way he could to protect me from working too hard. He’d be like ‘are you coming in on Saturday? If you are coming in, I’ll come in so you don’t have to do it,’” said Taylor, who Schuitema knew was a salaried employee and wouldn’t get extra pay for the extra hours.

That’s the kind of man Schuitema was – always looking out for others.

While his roles changed a few times during his five-plus years at Calvin, his work ethic, attention to detail, and kindheartedness remained steadfast. His colleagues will remember his genuine love for them and the students he worked alongside every day.

Schuitema was preceded in death by his mother, Marie Schuitema. He is survived by his children, Shelley Ypma, Katelyn and Derek Wellman, Travis and Tiffany Schuitema; six grandchildren; father, James Schuitema; siblings Cathy and Mike Atwood, Daniel and Tamara Schuitema; and many nieces and nephews. A celebration of life service will be held at a later date. The family has started a GoFundMe page with half of the donations going to help offset funeral expenses and the other half to support the work of Alcoholics Anonymous.