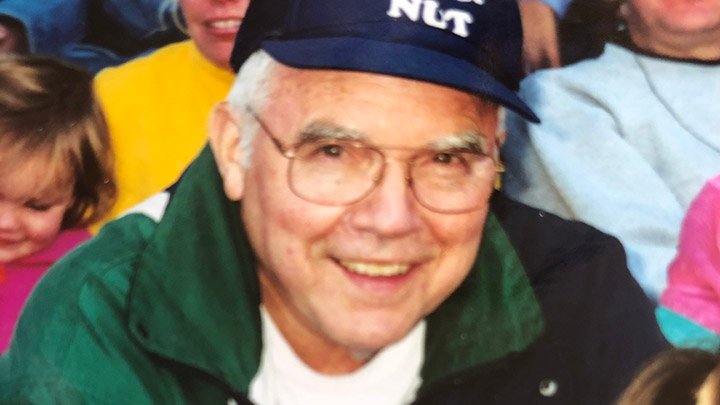 Bolt had an affection for the Detroit Tigers.

Making the past come alive was the goal for Robert Bolt, who served as a professor in the Calvin history department for 30 years.

“History is interesting because you’re talking about people all of the time,” said Bolt, in a 1995 interview with Spark.  “Who would want to go to Fredericksburg, Virginia, and stand on a ridge staring at a stone wall if it wasn’t for the history there, as Ambrose Burnside tried six times to go up and take those heights during the Civil War?”

Bolt, who spent three decades at his alma mater bringing American history to life, died on March 23. He was 89.

“Bob came back to Calvin in 1965 as part of the history department’s move to build up the U.S. side of its offerings to match its already stellar European track. Bob got the most popular course of them all—20th-Century America—and brought a focus on the presidency into the department as well, both as a teaching and a research interest,” said Jim Bratt, a former student and colleague of Bolt’s.

Bolt was known for bringing vibrance to the personalities of history. His research interests included both the religions of great American leaders like Abraham Lincoln, Franklin Roosevelt, and Woodrow Wilson, and their humor.

Students appreciated his approach to history as well as his kindness and empathy, Bratt said. “Not that he couldn’t bring the hammer down,” he said. “By his own testimony, William Garvelink—a future U.S. ambassador to the Democratic Republic of the Congo— said that it was Bob who had confronted him over his rather lackadaisical performance in the classroom and challenged him to work up to his potential.

“Bob could see that potential and cared enough about this so-far undistinguished student to put him on the road to better things,” said Bratt. “It was quiet, compassionate, and effective intervention—classic Bob Bolt.”

Beyond history, all in the department knew of Bolt’s affection for the Detroit Tigers.

“Bob and I loved baseball, and he even came to forgive me for being a Red Sox fan,” said Ron Wells, another former colleague.

“He and I were ardent Detroit Tigers fans who had to uphold the team’s honor against the Red Sox and Yankee interlopers who befouled our discussions in the department lounge come spring training season,” added Bratt, with a laugh.

Upon his retirement from teaching, Bolt joined the staff at Heritage Hall, where he would spend an additional 22 years working to collect and preserve records for the Christian Reformed Church.

“My dear friend Bob Bolt was a history professor, a denominational field agent working on church records in Heritage Hall, a fellow member of Woodlawn Christian Reformed Church, and a genuine soul—our conversations ranged from hockey (we both cheered for the Montreal Canadians, especially in their glory years) to deeply personal insights on our shared faith,” said Karin Maag. “His willingness to go deep tended to happen at a moment’s notice. I remember vividly one Hekman Library fire drill a couple of years ago, when Bob and I stood side by side outdoors in the parking lot. Other people were checking their phones or engaging in small talk, but not Bob. Eventually we got the all-clear, but he and I were so deep in our mutual reflections of providence and election and the wideness of God’s mercy that we adjourned to the library lobby to continue our conversation for a good quarter of an hour after the drill was done.”

Added former colleague Dan Miller: “My wife, Kate, and I visited Bob a few months ago, and he asked some very penetrating questions about what we thought about some contemporary—and contentious—issues. Unlike most of us, he wasn’t asking questions as an excuse to share his own opinions, he really just wanted to know what we thought. What a wonderful (and challenging) example that was to me!”

A private family burial has taken place. A Celebration of Life will take place at a later date, when all will be welcome to come together to honor his life and legacy.

“Most of all, I remember Bob as a gracious and kind colleague, always eager to be cooperative and generous.”

"Perhaps the greatest tribute I can give: in all the years we were colleagues in history and continuing in his post-retirement work in Heritage Hall is that I never heard Bob say a negative word about or to anyone. Robert Bolt was truly a man of peace."