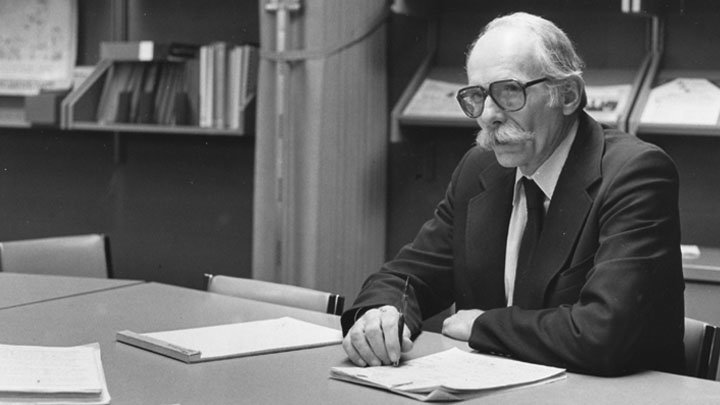 Phil Lucasse taught education at Calvin and worked in the department's Curriculum Center for more than 40 years.

Phil Lucasse was a teacher of teachers, spending the vast majority of his career inspiring young people with his energy and creative enthusiasm.

“Phil’s approach was always to be ‘all-in,’” said former colleague Steve Timmermans. “Exhibiting a love for the Creator and the Creation, Phil sought to instill in those he led a sense of wonder and appreciation, critical driving forces for both aspiring teachers and budding students.”

He first came to Calvin as a student, after serving in the U.S. Navy. He earned a degree in engineering, but turned to teaching in the early 1950s, earning a bachelor’s and master’s degree from the University of Michigan.

His tenure of employment at Calvin began in 1956, when he served for 13 years as Dean of Men. After completing a PhD in education, Lucasse returned to Calvin, this time to the education department, where he would serve until his “official” retirement in 1991.

Always the teacher, however, Lucasse stayed on at Calvin, working part-time in the education curriculum center for 20 more years.

Lucasse is remembered for his innovative approach to teaching.

“Phil was a leader in introducing field experiences for preservice teachers in elementary and secondary schools prior to the culminating experience of student teaching,” said former colleague Tom Hoeksema. “This integration of theory with practice early on in the preparation of teachers was novel in teacher education in the 1960s but has become the standard in teacher preparation ever since.”

As a supervisor for student teachers, Lucasse was assuring.

“Phil was a creative educator,” said former colleague Yvonne Van Ee. “He encouraged his students to be researchers and creative in their classroom work. He encouraged the use of cooperative learning strategies and collaborative group work. Phil was an encourager.”

He was widely known for encouraging colleagues as well.

“[During my tenure] Phil moved from department chair to Education 301-303 team leader,” said former colleague Arden Post. “He held monthly meetings to review the content we were teaching, to share ideas, to ask questions, and to receive support from colleagues.”

While Lucasse retired from the education department, he never stepped away from teaching. As the director of the curriculum center for 20 years, “he sharpened the focus of the center from being primarily a repository of educational materials … to being a place where preservice teachers could learn to critique curriculum and find those that best embodied theories being learned in professional education courses,” said Hoeksema.

Added Timmermans: “I recall accompanying education students to the curriculum center … . Eager to unveil new curriculum materials, Phil matched the needs of these soon-to-be teachers with the wonders of curricular innovation and design. While successfully identifying appropriate curriculum materials, his enthusiasm was infectious, spurring many on to excellence in teaching.”

Lucasse remained passionate about education throughout his life, serving on the task force that lead to the establishment of CALL, the Calvin Academy for Lifelong Learning, for senior learners in 1996. He served as the organization’s first president and was later given a Distinguished Service Award. He also continued his own education by taking numerous CALL classes.