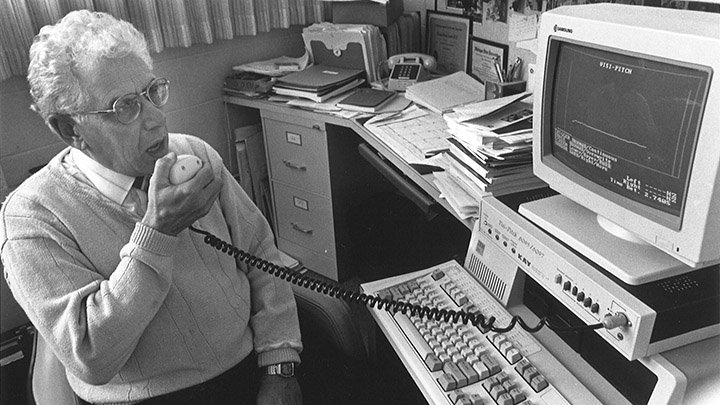 Marten Vande Guchte served as professor of communication arts and sciences from 1954 to 1993.

Described as a man with “quiet good sense,” Marten Vande Guchte ’53, a longtime Calvin communication arts and sciences (CAS) professor, died on Sept. 6, 2018; he was 87.

Vande Guchte spent his entire professional career—39 years—at Calvin, joining the teaching staff in 1954, immediately after graduating from Calvin with a degree in education and a budding interest in speech and audiology.

After a two-year hiatus to serve in the U.S. Army from 1955 to 1957, he returned to teach at Calvin while also pursuing a master’s degree at Wayne State University and PhD at Michigan State University.

“Mart was an early example of the CAS department’s willingness to experiment, to try new things,” said former colleague Randy Bytwerk. “He taught an early course in television production, for example. Later, he turned his attention to speech pathology and audiology.

“Who would have thought that the small program he established, with students spending the first three years at Calvin and then transferring to Michigan State University, would become the remarkable program that it is today?”

Not even Vande Guchte himself, who was surprised to hear that there were nearly 100 majors in the burgeoning speech pathology and audiology (SPAUD) program in 2010. “When I heard there were more than 90 majors I thought, ‘Wow, that is unbelievable.’ I’m thrilled about it,” said Vande Guchte, in an interview at the time. “What do they say? From a little acorn a great oak grows.”

Vande Guchte also served as the president of the Hearing and Speech Center of Grand Rapids and was a longtime member of the American Speech-Hearing-Language Association.

He is survived by his children, Kevin (Teresa) Vande Guchte, Beth Fulvi, and Kathi Vande Guchte; six grandchildren and five great-grandchildren. He was preceded in death by Betty, his wife of 64 years.