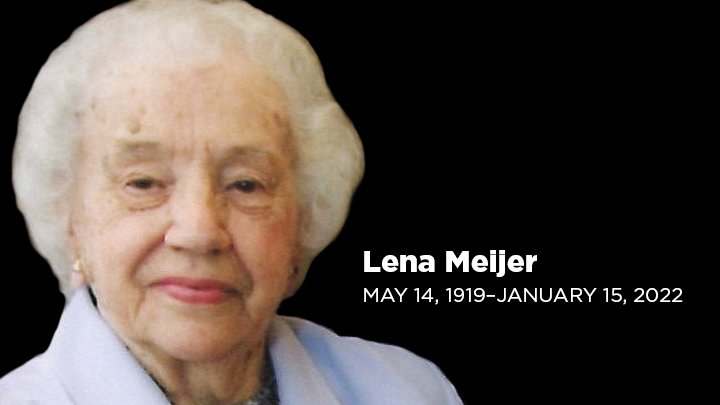 From her youngest days as a student in a one-room schoolhouse in central Michigan, Lena Meijer had an appreciation for education. She and her late husband, Frederik (Fred), demonstrated that gratefulness by supporting academic institutions, particularly in west Michigan, throughout their lifetimes.

Calvin University was one of the many beneficiaries of the Meijers’ generosity.

“The entire west Michigan community has benefited tremendously from the longtime support of the Meijer family,” said Calvin University President Michael Le Roy. “Fred and Lena’s example of deep dedication to this community has made west Michigan a better place to work, to study, and to live.”

In 2006, the Meijer family endowed the Frederik Meijer Chair in Dutch Language and Culture at Calvin. The establishment of the Meijer Chair enabled the university to continue its work as one of the leading institutions in higher education for the teaching, scholarship, and promotion of the Dutch language.

“While scholarship on Dutch and Dutch American topics had been part of my career at Calvin, my appointment to the Meijer Chair gave that more private interest a much greater public scope and opportunities on campus,” said Henk Aay, the first Meijer chairholder. “For six years I was able to invite and help sponsor Dutch writers, geographers, historians, musicians, and politicians to come and give talks and performances for the entire college community and its constituencies, and, in that way, promote appreciation and understanding of the Netherlands.”

“This gift of Fred and Lena Meijer has allowed us to bring many speakers to campus over the years for lectures, presentations, and other cultural events,” said De Vries. “These public events have not only provided enrichment opportunities to our immediate campus community, but also the west Michigan region at large.”

Another significant endeavor supported by the Meijer Foundation is the Calvin University Gateway Initiative, designed to implement innovative support strategies for first-generation students and emerging scholars during their first year of college. This initiative, which began in 2017, has helped students, who were previously underserved, thrive and achieve success.

"We are grateful to the Meijer Foundation for partnering with us to pilot and launch a number of first-year initiatives designed to ensure that Calvin students are well prepared for success," said Todd Dornbos, associate dean for retention, curriculum, and planning. "These investments have supported instructional development for key "gateway' (first-year) courses, revised curricula, and an expanded care network, all of which provide an improved experience for students."

Hundreds of students were also introduced to college through Calvin’s Entrada Scholars Program, of which the Meijers were longtime supporters. The program is designed to provide ethnic minority high school students access to higher education.

“We are so grateful to Fred and Lena for the opportunities they have provided Calvin to help all students have access to and be successful in higher education,” said Le Roy. “Their legacy lives on through the many students they have inspired through their generous gifts. We express our heartfelt sympathy to the entire Meijer family in the passing of their mother, grandmother, and great grandmother."