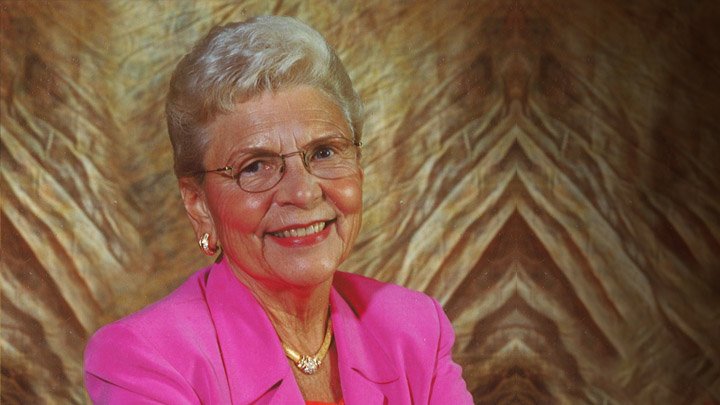 When people think about January at Calvin, they often think about June. Yes, the start of summer seems to be on many minds in the bitter cold of winter. But, I’m not talking about a month, rather a person.

“People often ask me how I feel about taking on your shoes,” said Kristi Potter, the current director of the January Series, at June’s farewell luncheon in 2007, “and I tell them your shoes are too high and too colorful for me to fill so I won’t even try, but I will gladly walk in your footsteps.”

June’s colleagues remember her bright personality and colorful wardrobe, that both literally and figuratively illuminated Calvin’s campus each January. They remember how June channeled her high energy, big personality, and persistence toward building a widely recognized, award-winning lecture series. (The series won accolades three times in the 1990s from the International Platform Association as the nation’s best campus lecture series before the association retired the award in 1999.)

“She worked hard to make it into something really significant and respected,” said Potter, who worked with June for 12 years on the January Series, before taking over as director in 2007. “She paved the way bringing in dedicated underwriters, many of them still with us today, and she gave us a reputation as a top-notch lecture series that big-name speakers have heard about and are willing to come and speak at.”

From Hanan Ashrawi to Jon Meacham, from Charles Colson to N.T. Wright, every January experts who are thought leaders in their fields come to Grand Rapids to dig deep into the day’s most pressing topics. And these conversations really took off thanks to June.

“June Hamersma offered remarkable leadership at Calvin, turning the January Series into a learning opportunity with a reach far beyond our campus community,” said John Witvliet, director of the Calvin Institute of Christian Worship, and a friend of the family. “The 300+ lectures and events she hosted on campus over those 20 years brought thousands to our campus for the first time, and showcased Calvin’s liberal arts vision in compelling ways.”

Potter says that June was certainly persistent and demanded excellence. And she had such high expectations because she believed in the value of Calvin’s mission.

“She wholeheartedly believed in the importance of a liberal arts education with a Christian perspective, and early on understood that a good education is one that teaches you how to think, not what to think,” said Potter. “She valued providing opportunities to hear from a variety of viewpoints, knowing that this made us stronger thinkers and stronger Christians.”

June articulated this well in 2006:

“I often am asked, ‘How can a place like Calvin—a Christian college—present such a diverse series?’ My answer is that a series like this can only happen at a place like Calvin,’” said Hamersma, in an interview for an article that appeared in the winter 2006 edition of Calvin’s alumni magazine, Spark. At Calvin we know who we are, and we know what the non-negotiables are. Once you know who you are and what your non-negotiables are, then the whole world of ideas is open to you.”

“Today, the whole world of ideas is now opened up even further during the month of January to include more than 70,000 people who are joining the conversation online, in person, or at one of 60 remote sites continent-wide.

June has made quite the investment in the Calvin community and beyond with the gift of the January Series. But, she also made a great investment in people.

“I will always be grateful to June for seeing in me the potential to take over the role of coordinating the January Series, even when I didn’t see it in myself, said Potter. “Once she retired she was my biggest cheerleader.”

June is survived by her husband, John, who was a professor of music at Calvin for 50 years; their children John (Glenie) Hamersma and Mary (Ken) Baas; and four grandchildren. She is also survived by her brother, Lawrence D. Bos, Sr. and her sister-in-law Henrietta Hamersma. The funeral will be held on Friday, February 21, at 11 a.m. at Sacred Heart of Jesus Catholic Parish (156 Valley Ave. S.W.) in Grand Rapids, Michigan. A visitation is scheduled for Thursday, February 20 from 5-7 p.m. at Metcalf & Jonkhoff Funeral Home (4291 Cascade Road SE).

In 2006, June was named Communicator of the Year by the West Michigan Public Relations Society of America, along with Calvin president Gaylen Byker, for her work as co-chair with Byker of the Petra: Lost City of Stone exhibition which was on display at Calvin in 2005. Bert de Vries, professor emeritus of history, and his wife Sally, both longtime colleagues and friends of June's, worked with her to put together a lecture series of Petra specialists as part of the exhibition.

“We appreciated June’s whole-hearted enthusiasm, deep experience in sponsoring speakers, gregarious intellectual curiosity, and unstinting work ethic which became very real to us at that time, and we loved it,” said de Vries.

June's enthusiasm and care extended to the other communities she was part of as well, through volunteering in the Susan Lowe Guild of Butterworth Hospital and her leadership as chair of the Education Committee for the Michigan Association of Hospital Auxiliaries. And most notably, she was the founding member of the Hospice of Michigan Foundation Board.

“Her significant volunteer service for Hospice of Michigan and other local hospitals was a model for broader community engagement,” said Witvliet.