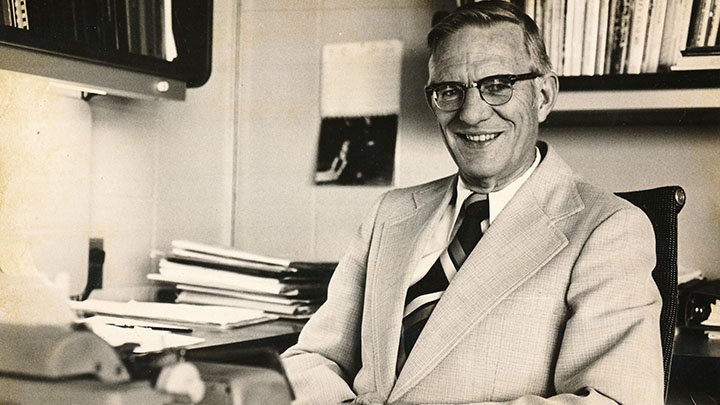 John VandenBerg served his alma mater for 35 years as an economics professor, dean of faculty and vice president of academic affairs.

“The grand architect of Calvin College as we know it.”

“[He was] always thinking of how to make Calvin a better environment for students and faculty and a better agent of renewal in society.”

Calvin faculty, emeritus professors and former administrators give high praise to John VandenBerg, who served his alma mater for 35 years as an economics professor, dean of faculty and vice president of academic affairs. VandenBerg, 98, died on November 11, 2017, but he left quite a legacy. And that legacy has many layers.

The most visible layer of his legacy can be observed on a walking tour of campus. That’s because VandenBerg was one of a few key people on the leadership team that purchased Knollcrest Farm back in 1957. Now, the college’s 400-acre campus serves 3,800 students from all over the world and provides countless opportunities for the west Michigan community to take in cultural events, lecture series and athletic contests.

While his leadership on this team led to the construction of many important infrastructures that now make up the Knollcrest campus, his former colleagues say it was his commitment to improving the academic infrastructure that was most central to his legacy. And that started when he first stepped back onto campus in 1947 as the college’s first economics professor with a PhD to teach at Calvin, and was the founder of the economics major.

“He saw economics as a vital part of a liberal arts college at a time when most small colleges, and almost all Christian colleges, had economics just as cognate courses or options for distribution requirements,” said John Tiemstra, economics professor emeritus. “He and Tony Brouwer offered the most complete and professional curriculum they could manage back in the '50s and '60s. Their courses were rigorous and demanding. This did not make them popular, but they were committed to giving Calvin students a solid foundation in the best of academic economics. Their success in turning out not just professional economists of distinction, but leaders in business, finance, and accounting testifies to the great things they accomplished with very limited resources. When people of my generation came around, there was something great that we could build on as the college grew and prospered, especially in the '80s.”

And his impact only grew as he moved into the second half of his career at Calvin as the dean of faculty and vice president of academic affairs in 1964.

“Just about any structural feature of the college’s work, at least up to the point where we later went to a senate system of faculty governance, came from John’s keen and clear mind, and all duly hashed out with faculty leaders,” said Joel Carpenter, director of the Nagel Institute for the Study of World Christianity at Calvin College and former college provost.

Henry Ippel, professor of history emeritus, summed it up well in a retirement tribute to VandenBerg in the spring 1982 issue of Spark magazine:

“John was at the helm of the academic division of the college during a period of constant expansion of faculty, student body, courses, and programs. Under his careful leadership, meticulous concern for detail and his humane relationships with faculty and students, the curriculum, programs, and faculty organization of the college were dramatically altered and improved. Anyone familiar with Calvin’s aspiration for academic excellence must recognize John’s hand and heart and mind in the 4-1-4 curriculum, the Master of Arts in Teaching, the Master of Arts in Christian Studies, the Multi-Cultural Lectureship Series, The Calvin Center for Christian Studies, Faculty governance and many other programs.”

Supporting the mission and people

And while his accomplishments are many, it was the way he went about this work that earned him the most respect from his colleagues, modeling a deep appreciation for the college’s mission.”

“As administrator, I found him to very fair-minded, always keeping the educational mission of the college as top priority, and devoted to the liberal arts character of Calvin,” said Tiemstra.

“John was strongly committed to the goals of a Christian higher education in the Reformed tradition,” said Tony Diekema, Calvin College’s eighth president (1976-1995). “He was especially rigorous in assuring that Calvin followed that path in all of its curricular development, as well as in its implementation in faculty teaching and demeanor. His encouragement of faculty and students in pursuing the values and commitments of this tradition was extraordinary.”

And equally as extraordinary? His support of faculty. And his ability to rally the community together around a common mission.

“He was a team-player in his academic vice presidential role, and a “master” at bringing faculty together to develop college policy and curriculum. He was very collegial in all of his relationships with faculty and our administrative team,” added Diekema.

“He was deeply committed to a faculty voice at the center of the college and worked diligently for effective decisions to support a Reformed Christian educational mission,” said Shirley Roels, former Calvin professor of management and advocate for ministry leadership fostered through the college. “John VandenBerg was an elegant man filled with Christian grace, diplomacy and kindness.”

“He worked to build up the faculty and offerings at Calvin so Calvin could better prepare students for Christian service in the world, and to be of influence in a broader arena,” said George Monsma Jr., professor of economics emeritus.

“I used to do retiree tributes, and what I found out from so many of the faculty who were the pioneers and builders of post-1950s Calvin was that John personally scouted and recruited them, and even worked out some financial support for them to finish their PhD degrees. He built the Calvin of the 1960s, the home turf of “the Fab Four”—Richard Mouw, George Marsden, Alvin Plantinga and Nick Wolterstorff. And there were many more faculty leaders, especially in the sciences, whom John helped to get and keep here,” said Carpenter. “John was all about the faculty.”

“In short, John was a very important force in making Calvin what it is today,” said Monsma Jr.

Visitation will be held at the Raybrook Manor, 2121 Raybrook SE, Grand Rapids, Michigan, on Friday, December 8 from 4-6 p.m. A memorial service will be held at 2 p.m. on Saturday, December 9, at Fuller Avenue Christian Reformed Church, 1239 Fuller Ave. SE, Grand Rapids, Michigan. Memorial contributions may be made to Calvin College (the John and Marian VandenBerg Family Scholarship).