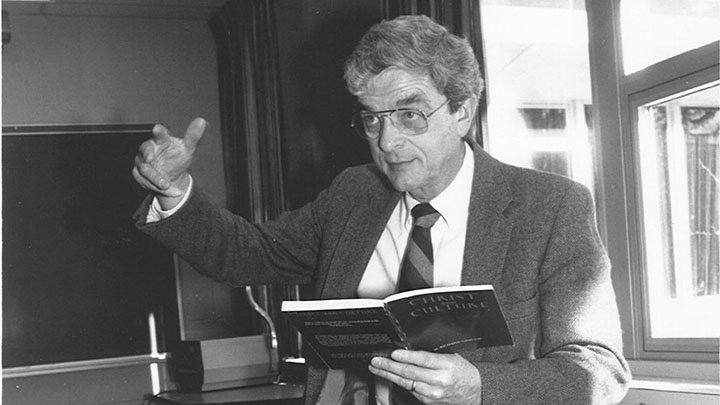 Remembered as “a model of goodness,” Calvin religion professor emeritus John Primus died on Nov. 5, 2018. He was 86.

A 1954 Calvin graduate and a 1957 graduate of Calvin Theological Seminary, Primus came to teach at Calvin in 1963 after receiving his doctorate from Free (Vrije) University in Amsterdam.

When he retired 34 years later, Primus was the last remaining member of the religion department who had received his degree from Vrije University, overseeing a much more diverse group of faculty members.

“He was just the right person to serve as chair of the religion department in the late 1980s and early 1990s, as he shepherded the department through a major transition in its faculty and curriculum,” said Ken Pomykala, Calvin religion department chair. “As the department moved from a faculty almost uniformly educated at Calvin, Calvin Seminary, and the Vrije University to one with a younger faculty with more diverse academic profiles as graduates of North American universities, John brought both stability and freedom: stability in that John himself was rooted in the prior tradition, yet freedom in that he gave younger faculty key roles in moving the department forward toward the 21st century.”

Primus was also instrumental in insuring that studying key elements of John Calvin’s theology would become a hallmark of a Calvin education. When a major overhaul of the department’s curriculum in 1988 eliminated an elective course on Calvin’s Institutes, Primus assured college faculty members that in the new curriculum requiring all students to take a course in Christian theology with an emphasis on the Reformed tradition would actually expand the teaching of Calvinism at Calvin.

Primus’ particular academic interest was church history. A Puritan scholar, he wrote books on the Puritan understanding of the Sabbath and the history of the Church of England.

He was known as a dedicated teacher, with a great sense of humor, and a committed follower of Christ.

“A stellar teacher who was cherished by both students and colleagues alike because of his Christ-like care for each, John aimed to show that the final purpose of Christian teaching and learning is worship of God and service to others,” said former colleague Dale Cooper. “During his 34 years among us, he became a ‘pillar person’ within our Calvin community, a respected leader to whom others looked continually for wisdom and guidance.”

Added friend and former colleague Wally Bratt: “John was steady as a rock. He did not go through life in a hurried fashion, but rather at a steady pace. He had a wonderful sense of humor, which was reader to break forth at the slightest provocation.  He was a committed believer; he always ended his public prayers with the line, ‘in the strong name of Jesus.’”

John is survived by his wife of 63 years, June (Borst); his four children, John and Brenda Primus, Gwen and Tom Hendrikse, Ann and Mark Berends, and Jim and Kim Primus; 13 grandchildren; and eight great grandchildren.