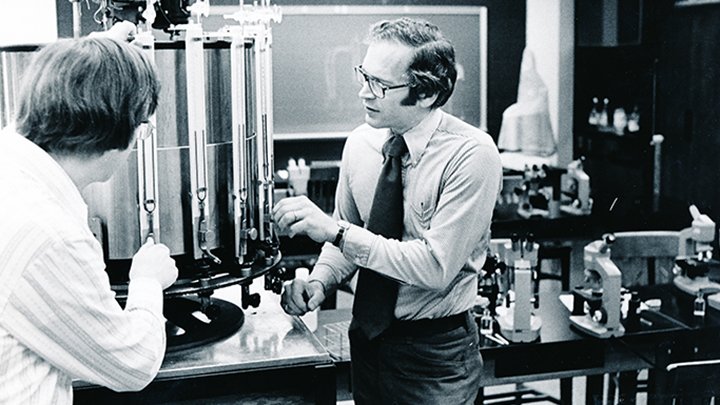 Opening up opportunities for students was one of the key hallmarks of Gordon Van Harn's tenure at Calvin College.

“To be faithful to my God and Creator in all that I do.”

Those were words used by Gordon Van Harn in 2004, upon receiving the Faith and Learning Award from Calvin College, to articulate his mission in life.

Van Harn, 82, who died on April 3, 2018, was committed to living out that mission. And the reflections of his former colleagues and students demonstrate his commitment to it.

“Gord was always there as a true friend and wise confidant,” said Tony Diekema, former Calvin president (1976-1995), who served alongside Van Harn on the administration for more than a decade.

Diekema describes him as a superb team-player, and a joy to work with toward a cherished and common mission.

“He was the embodiment of the values and personal qualities of the Calvin community,” said Diekema.  He modeled for all of the faculty the essence of a pursuit of excellence within a Christian academic community.  In short, Gord was the solid and sound academic voice of the college both within and beyond the campus.”

Van Harn’s colleagues are quick to point out his many accomplishments during his tenure as provost, which centered around his commitment to the integration of faith and learning, his development of faculty and students, and his interest in and support of interdisciplinary collaboration. He was considered the principal architect of the college’s Expanded Statement of Mission that clarified the vision of the college, and under his leadership the college made many curricular  improvements, integrated service-learning more strategically into the curriculum, significantly expanded the college’s off-campus semester programs, and established fully accredited degree programs in nursing, engineering, and social work. Van Harn was also instrumental in developing the Christian Perspectives on Learning (CPOL) course that was the forerunner to the current Developing a Christian Mind (DCM) course that has been emulated by many Christian colleges. And that’s just the short list.

But more than his vision and administrative accomplishments, Van Harn will be remembered for his commitment to the development of the people involved in all those areas—whether it be his students, his colleagues, or the broader community.

“Many of us currently at Calvin primarily know Gord as an administrator who contributed so ably to the mission statement,” said John Ubels, biology professor emeritus and a former student of Gord’s. “What I think has been forgotten is that earlier in his career he was also a talented researcher who promoted his students' interest in research.”

Ubels was one of those students who learned from and researched alongside Van Harn. So was David Dornbos.

“He was instrumental in my pursuit of a B.S. in biology and consequently my entire professional life post-Calvin,” said Dornbos, biology professor at Calvin, who credits Van Harn with helping him as a first-generation college student to see graduate school as a possibility. “Gordon not only recognized a little potential, he put me at ease, instilled a vision of what could be, and enabled me to succeed.”

Pete Tigchelaar, biology professor emeritus, was also a student of Van Harn’s and describes him as the most significant faculty member in his life.

“Gord is the reason I was a biology major at Calvin, and a major reason I returned to Calvin. In a big sense I owe him for my 40-year career as a biology prof at Calvin!” said Tigchelaar.

And Randy Van Dragt, biology professor emeritus, credits Van Harn with helping him as a student appreciate a liberal arts education and the place of science within it. “I learned from Gord a love for the liberal arts that a place like Calvin can afford students; I carry that to this day.”

For as much as Van Harn had to offer his students and colleagues in the way of expertise in human anatomy and animal physiology and in biological research, in how to integrate faith and learning in the classroom, and in showing the value of the liberal arts, it was all done out of a care for people and their wellbeing.

“Gord cared deeply about his students; he recognized the gifts and talents that lay beneath academic struggles, and helped to promote their careers,” said Ubels.

“He leaves behind a legacy of working with students on research projects, avidly mentoring students along their career paths, and demonstrating his faith in God and his devotion to Calvin College,” said Rich Nyhof, biology professor and former colleague of Van Harn’s.

“Gord and his wife, Mary, were always gracious in their hospitality to students and new faculty members,” recalls Uko Zylstra, emeritus professor of biology, who knew Van Harn both as professor and colleague. “Even as a student I recall Gord and Mary inviting the class to their home for a social interaction. My wife and I experienced that as new faculty as well.”

“Returning to Calvin approximately 25 years later, Gordon remembered who I was, the context he knew me from, and asked specific questions about what I had done after graduating from Calvin. This blew me away--what a memory of people,” said Dornbos. “Gordon was approachable, curious about topics of the day, and supportive – about biological topics, administrative issues, and even such details as where our boys were going to school after Calvin. My heart lifted each opportunity I had to talk with him.”

Van Harn is survived by his wife, Mary; his children, Pam and Harry Plantinga, Mark and Kim Van Harn, and Barbara and Joel Adams; and nine grandchildren.

Visitation will be held at Grace Christian Reformed Church, 100 Buckley SE, Grand Rapids, Michigan, on Thursday, April 5, 2018, from 2-4 p.m and 6-8 p.m., with an additional visitation on Friday, April 6 from 11:30 a.m. to 1 p.m. A memorial service will be held at 1 p.m. on Friday, April 6, 2018, at Grace Christian Reformed Church. Memorial contributions may be made to the Calvin College Student Research Fund or to the Van Andel Institute Graduate School. 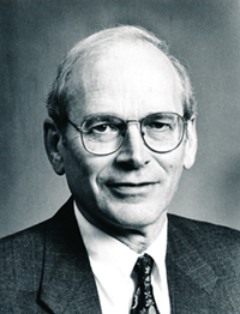