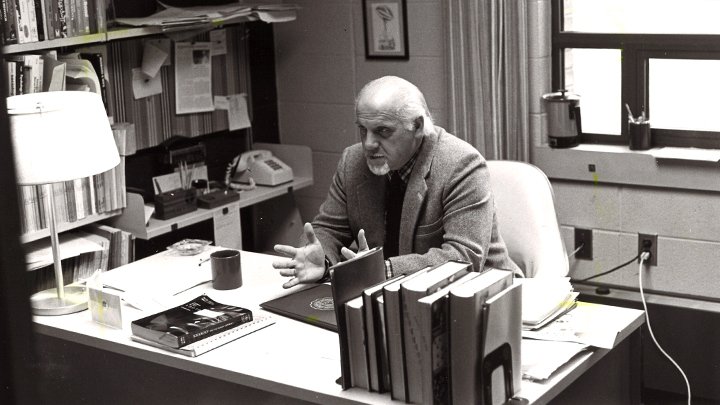 Gordon DeBlaey ‘60 was always grateful to his alma mater for offering him “the liberating concept of new perspectives on life and society.” He lived out his more than 30-year career as a Calvin University sociology professor trying to do the same for all of his students.

“Gordon was a professor of mine and, later, a colleague,” said Michelle Loyd-Paige, executive associate to the president for diversity and inclusion. “Three words come to mind: approachable, authentic, and fun. He made coming to class and coming to work fun. He loved people; he loved sociology; he loved life.”

DeBlaey first came to Calvin as a student from California. He returned to California upon graduation with his new wife, Marcie Koning, a fellow Calvin alum. After a few years of working on the west coast, they returned to west Michigan, so Gord could pursue a master and doctoral degree at Western Michigan University in Kalamazoo.

Upon graduation he was offered a position in Calvin’s growing sociology department, where he would teach for more than three decades.

“I remember Gord as being a steady presence in the department,” said former colleague Cheryl Brandsen. “He loved the discipline of sociology and the different ways sociology helped us to understand the world.”

The study of sport

Early in his tenure at Calvin, he developed an interest in the sociology of sport, an area of study that did not immediately garner the most respect. DeBlaey took it as a challenge to provide a sociological perspective on something that most people think of as either a simple diversion or as the most important thing in life.

His particular interest was in how mainline Protestant denominations were dealing with the popularity of sports in American society. His class on the topic quickly became a course highly sought after by students.

“He was the first member of the department to recognize the increasing influence and importance of ‘sport’ as a social institution in American society,” said former colleague Peter De Jong. “I recall his courses attracted many Calvin athletes who remarked that Dr. DeBlaey’s analysis of sport in society was informative and challenging, helping them to be more thoughtful of the place of sport in their own lives as well as the Christian life more generally.”

And his interest in this perspective on sport, influenced students and future scholars.

“It was at Calvin that I started thinking about sport, something I loved to play, as a serious topic of study,” said Brian Bolt, Calvin dean for education. “As a student, I probably took it for granted that several of my professors in the then HPERDS department, and a sociologist from across campus, regularly inquired and argued about the place of sport in society and Christian life.

“Few scholars found sport to be worthy of inquiry, so to see several at a small college like Calvin, was rarer than I knew at the time,” he said. “To me, Professor De Blaey was a really smart guy whose interest gave credibility to the passion that consumed my time.”

A sense of humor

Known for his snazzy shoes and fun socks, DeBlaey maintained a particular flair at Calvin, and always a sense of humor. He made friends easily, many of whom remained close to DeBlaey throughout his lifetime.

“At every gathering of department colleagues, formal or informal, no matter how serious the purpose, Gord had a way of lightening the load of the moment,” said longtime colleague Rodger Rice. “He was the jokester of our department, and every department needs one. I thank God for this significant gift. Life to Gord was never too serious not to find a reason to laugh.”

His love of laughter and enthusiasm for life was contagious.

“Gord was friendly, warm, and welcoming to all with whom he came in contact,” said Calvin sociology professor Todd Vanden Berg. “His humble disposition and sense of humor put peers and students at ease. I carry his memory with me every time I teach our department’s Sociology of Sport class.”

Added De Jong: “Gord appreciated being able to serve God at Calvin. He was a keen believer in the value of a sociological perspective for Christians seeking to live out their faith in contemporary society. This commitment and his considerable gifts for engaging others made him a wonderful instructor and colleague.

“We will all miss him, to be sure, but will remember him with warmth in our hearts and a big smile on our faces.”

DeBlaey is survived by his wife, Marcie; his daughter Mary (Bob) Jackson; four grandchildren and four great-grandchildren. He was preceded in death by his son, Michael.