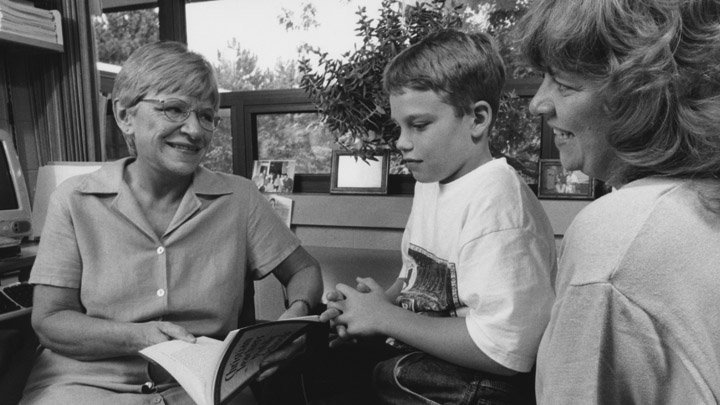 While an accomplished teacher in her own right, Gloria Goris Stronks ‘57 was not content with that achievement. It was her passion to be a teacher of teachers, a goal she pursued vigorously as both an education professor and prolific scholar and speaker for more than four decades.

Stronks, who dedicated 16 years of her career to the education department at Calvin, died on April 28, 2021.

"Gloria was a respected scholar and member of the education department," said Yvonne Van Ee, Calvin education professor emerita. "She was committed to excellence in teaching reading and guided her students in thoughtful theory and practice."

Born on a farm outside of Emden, Minnesota, Stronks attended school in Hull, Iowa, before coming to Calvin as a student in the mid-1950s. Upon graduating in 1957, she began her career, teaching virtually every grade level throughout schools in Michigan, Tennessee, Kentucky, and Illinois.

Those combined experiences inspired her to complete her PhD in curriculum and instruction at Northern Illinois University. “It’s interesting to see how earlier work comes to prepare you for the work you do later in life,” said Stronks in an interview with Calvin Spark upon her retirement in 2001.

Educating through the lens of faith

Following a stint at another private college, Stronks joined the Calvin education department, specializing in elementary and secondary education. Her focus was on helping educators think about their craft through the lens of faith.

To that end, Stronks and her daughter, Julia, coauthored Christian Teachers in Public Schools: A Guide for Teachers, Administrators, and Parents (Baker Publishing Group, 1999). “Most of the colleges in the Christian coalition have students who go into public schools as teachers, and there has been nothing written on how you teach in a way that is legal and in keeping with your deepest beliefs,” said Stronks in a prior interview about the book.

Stronks also felt strongly about the needs of middle schoolers, an age-group she spent considerable time researching and mentoring. Reaching and Teaching Young Adolescents: Succeeding in Deeper Waters (coauthored by Nancy Knol, Christian Schools International, 1999) was one of the outcomes of that research.

An innovator in middle school curriculum analysis, Stronks believed in helping adolescents seek out their gifts and begin to use them in building God’s kingdom.

For her prowess in these areas, Stronks was a much sought-after speaker, traveling around the world to work with teachers and schools.

She was also a supportive colleague closer to home, helping those in the department and more widely at Calvin become better teachers.

“Gloria had a very important place in my life and my heart,” said education professor Clarence Joldersma. “She was the person at Calvin in my department who most encouraged me to pursue my scholarship and was always my cheerleader for my early attempts in sending out articles. Without her support and encouragement I don’t think I would be the successful scholar that I am today.”

Added former philosophy department colleague Nicholas Wolterstorff: “Though elementary and secondary education was not at all my area of speciality, I did, on occasion, when I was teaching at Calvin, make forays into the area: talks, essays, etc. When I was a professor, I was not one of those who just taught as they were taught but instead reflected on the values, the goals, the strategies of higher education.

“It was that interest in higher education that led me to become interested in education more generally. And Gloria was always my guide in this: she would cheer me on, offer suggestions for lines of thought to explore, suggest readings, etc. So my essays on elementary and secondary education, collected in Educating for Life, owe much to Gloria.

“Not only was Gloria helpful in this way, she was always a delight to be with and to work with. She was energetic and winsome. She had ideas.”