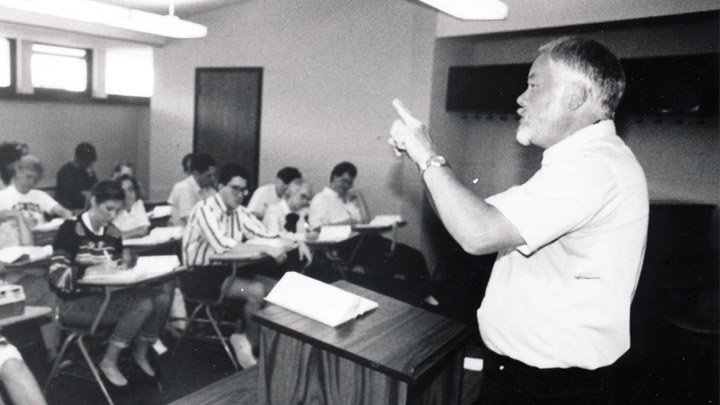 Longtime Calvin English professor Edward Ericson once described himself as a man who “aimed to be a high school English teacher and missed.”

Instead, he spent his entire career in higher education, teaching in the English departments of Hope College, Westmont College, Northwestern College and ultimately Calvin, where he would spend the bulk of his career.

He grew up on the south side of Chicago, in a self-described “devout but anti-intellectual home.” He never imagined himself teaching college or writing a book.

He spent three years at Milwaukee Bible College, then transferred to Hope College. At one point a mentor suggested he attend graduate school. “I had to go to the library and look it up: What did you do in graduate school? I didn’t know,” he said, in an interview for Spark.

He went on to the University of Arkansas for his master’s and doctoral degrees; he eventually landed at Calvin in 1977, where he would teach for 26 years.

Originally a scholar of 17th century English literature, and John Milton in particular, Ericson picked up, for casual reading, the novels of Russian dissident Aleksandr Solzhenitsyn.

“When he discovered Solzhenitsyn, he found his new academic purpose--to find an adequate audience for Solzhenitsyn in the West, to explicate his fiction and non-fiction work, to advance and defend Solzhenitsyn's analysis of and arguments against totalitarian regimes, to engage in the critical wars over Solzhenitsyn's relevance, and, with Solzhenitsyn's approval and assistance, abridge the Gulag Archipelago,” said longtime colleague Jim Vanden Bosch.

He wrote about Solzhenitsyn as an author with a Christian understanding of human character. A single article led to many and, in time, several books. In 1983, Ericson worked side-by-side with the Russian exile, making final revisions to Ericson’s abridgment of the Gulag Archipelago.

Beyond his scholarly endeavors, Ericson was a masterful teacher. “Ed appealed to a wide range of students,” said former colleague John Timmerman, in a prior interview. “Students can see in a second if you’re a fake or if you mean it—and they knew he cared.”

He was awarded Calvin’s Faith and Learning Award in 2009, recognizing his “excellence in teaching, spiritual impact, concern for students and lasting impact.”

“He was deeply committed to the idea and the ideals of a Christian liberal arts college education,” said Vanden Bosch. “… Ed was an earnest convert to the kind of Calvinism he discovered at Calvin. Having been raised in an earnest version of fundamentalism in Chicago, he would regularly testify to the capaciousness, the grace and the range of cultural project we were engaged in at Calvin.”

Both a former student and colleague of Ericson’s, Roy Anker attested to his many gifts: “He was a lover of literature, master teacher, consummate storyteller, eminent scholar, dauntless administrator and stalwart friend. In pretty much everything Ed did he gave his all.”

“I wonder if Ed knew just how massive his presence and influence was: in the classroom students adored him and he became the model teacher for many; in scholarship he was both prolific and wide-ranging; as chair of the English Department he administered with purpose and precision,” added another former colleague Dean Ward. “He did everything you could want a college faculty member to do and did it all brilliantly.”

Ericson is survived by his wife, Jan; children Bill and Edward (Melinda); and five grandchildren.