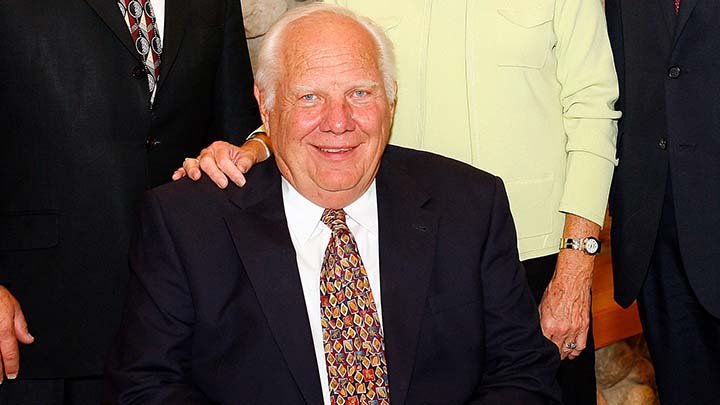 Doug Nagel ’64 knew it well, and he pursued it with passion. It’s what compelled this successful businessman to give cheerfully and generously to the work of Calvin University for nearly half a century.

“I was present when Dr. Gaylen Byker presented Doug and Lois with the opportunity to establish the Institute for the Study of World Christianity and I could see first-hand the excitement in both of their faces that this project matched exactly with their philanthropic interests,” said Bob Berkhof, a close friend and longtime gift officer at Calvin.

“Doug was passionate about Calvin’s distinctively Christian liberal arts mission and its role in building up Christian communities around the world,” said Byker, who served as Calvin’s president from 1995 to 2012.

The result? The establishment of the Nagel Institute for the Study of World Christianity.

“They were passionate about spreading God’s Word to the entire world and this was the vehicle to do just that,” said Berkhof.

Since its inception in 2006, the Nagel Institute has been doing just that.

“Because of the Nagels’ endowing gift and annual generosity, the Nagel Institute has been able to reach hundreds of Christian thinkers worldwide and encourage them in their strategic work of relating the Gospel to their culture. The strengthening and deepening of the church’s witness worldwide is their legacy,” said Joel Carpenter, who served as the institute’s director from 2006-2019.

While the Nagels’ generosity has literally impacted nations, it has also literally opened doors on Calvin’s Knollcrest campus in Grand Rapids, Michigan.

Doug, who suffered from polio since his teenage years, was committed to making Calvin’s campus a welcoming place for students with disabilities. In 1996, he and his wife established the Doug and Lois Nagel Disability Endowment.

Over the years, that’s translated into renovated individual rooms, bathrooms and coffee kitchens in the residence halls, the installation of electronic door openers, ramps, and an audible crosswalk. It also includes an accessible van that Lisa Kooy, Calvin’s disability coordinator, says “we affectionately named the KnightRider.”

Kooy also said their fund made it possible for students with chronic health conditions to live in housing with air conditioning and free of carpet and students with hearing loss to have strobes installed in their rooms and access to hearing loops in Van Noord Arena.

“Their gift truly touched every area of campus,” said Kooy.

A cheerful and invested giver

It wasn’t just the physical gift that made an impact, it was the way in which Doug and Lois gave.

“No one that I know has gotten more joy out of giving and seeing God use their gifts than Doug and Lois have,” said Joel Carpenter. “Doug loved it when I came over to his place and reported on our latest projects at the institute. It literally brought tears of joy to his eyes. ‘The Lord loveth a cheerful giver,’ the Bible says, and Doug and Lois have been exemplary in their joyful generosity.”

Rick DeVries, a member of the Campus Accessibility Advisory Committee at Calvin, remembers fondly the Nagel’s annual visits with the committee. “Surely his gift will live on at Calvin,” said DeVries. “It is his encouragement and optimism that we will miss.”

Retief Muller, director of the Nagel Institute put it this way: “Their dedication and goodwill to Calvin were clear as daylight.”

So too is their legacy.

“The strengthening and deepening of the church’s witness worldwide is their legacy,” said Carpenter.

“Doug’s consistent and unwavering support allows us to welcome students, families, and community members of all abilities into the full life of the university,” said Kooy. “We are grateful and will miss him, his stories, laughter, and his deep love of Calvin University. We look forward to continuing his legacy.”

While the Nagel Institute and the Nagel Disability Endowment represented their main areas of support at Calvin, the Nagels’ also supported many other areas and special projects at the university.

Nagel is survived by his wife of 67 years, Lois Arlene (DeHaan). He is also survived by his children, Julie Nagel, Joni (Tom) DeFouw, Jim (Deb) Nagel and Jan (Peter) Malek, ten grandchildren, and 13 great grandchildren. Visitation and viewing will be held on Wednesday, December 8, from 4-7 p.m. at Zaagman Memorial Chapel (2800 Burton St. SE Grand Rapids, MI 49546). Funeral services will be held at 11 a.m. on Thursday, December 9 at Seymour CRC (840 Alger St. SE Grand Rapids, MI 49507), with visitation one hour prior to the service. The service will also be available via live stream at https://seymourchurch.org/doug-nagel-service. The family requests that masks be worn at the visitation and funeral.