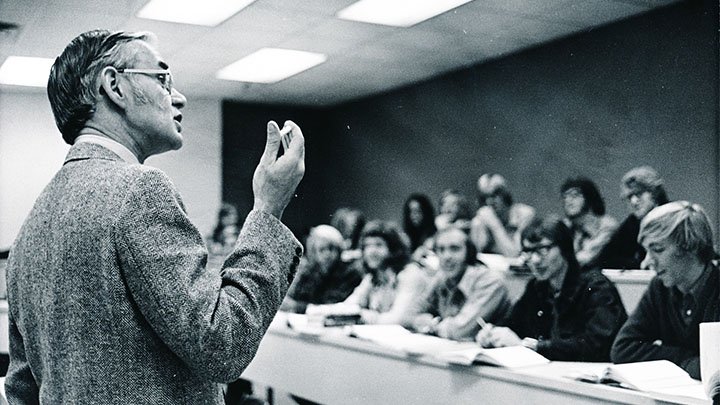 “Don can certainly be considered as the father of accounting and business programs at Calvin.”

Those words penned by Bob Medema, a former faculty colleague and student of Donald Pruis—who died on Saturday, September 2 at the age of 87, shortly after being diagnosed with cancer—point to quite a legacy, especially considering the most recent graduation report shows Calvin’s most popular major to be business.

“One thing that Don should be remembered for was establishing accounting as a professional program,” recalled Ray Slager, professor of accounting emeritus, who was both a colleague and student of Pruis. “That of course has been refined and improved over the years to the new master’s program that just held its first class this week.”

Pruis earned a business degree from Calvin in 1951, a master’s in business administration from the University of Michigan in 1953 and then went on to spend two years in accounting practice at Touche Ross in Detroit and Grand Rapids and another two years in the Air Force. In 1957, he returned to Calvin College and served his alma mater for 36 years in what was then Calvin’s economics and business department.

He began teaching a variety of courses including all levels of accounting, finance, business law and business policy. Department growth later allowed Pruis to concentrate most of his energies in teaching his first love—accounting.  What he accomplished during his three-decade plus tenure is impressive. One such evidence of his lasting impact is the fact that the department’s 1982 statement of goals that he helped develop still helps guide the business curricula some 35 years later.

But it wasn’t what Pruis accomplished that his former colleagues and students remember most about him, but rather how he went about this work.

His colleagues describe him as a humble servant and a true visionary; an exemplary, kind and hospitable colleague, and someone who loved Calvin.

“He was a quintessential gentleman academic,” said Kurt Schaefer, professor of economics.

“At the core of his being, Don was a deeply Reformed Christian. He was a good student of both Scripture and John Calvin. From those bases Don taught me and many other colleagues that profit was a business means instead of a business goal,” said Shirley Roels, a longtime colleague of Pruis. “For Christians the goal of business should be effective stewardship of God’s resources. In business we should see ourselves not as owners but as grateful representatives.”

And Roels added that these were underlying themes to Pruis’ teaching, clearly evidenced by the words of those colleagues he worked with who were also once his students.

“Fifty-one years ago I first met Professor Pruis,” said Slager, “I was in my first accounting class with him as professor. He instilled in me a passion for accounting. After a number of years working in both public accounting and in industry I accepted a position at Calvin College and Don became a mentor, a colleague and a good Christian friend. In the years that I taught alongside of Don, I know that he always enjoyed teaching the introductory accounting classes.  There he had the opportunity to present the topics in an understandable fashion.  I think that was a real passion for him.”

“When I started as a freshman at Calvin, one of my first classes was Don's introduction to accounting. He also served as my academic adviser when I was a student.  He always seemed to be interested in me as a student and what my aspirations were,” said Evert Van Der Heide, a professor of economics at Calvin. “I got to know him much better as a colleague … Besides being fun to be with, he was a good example of a professional business person. He had a great laugh that I can still see in my mind today.”

Pruis’ colleagues say he was an advocate for Christian liberal arts education, saying it was critical in nurturing the idea that business needed a moral foundation and had broad social responsibilities.

“The thing that sticks in my mind most [about Pruis] were his discussions about the need for the Rule of Law in society.  He could get quite passionate about this issue,” said Van Der Heide.

“He understood Kuyper’s perspective on calling and firmly believed that careers in accounting and business offered great potential for business transformation,” said Medema.

After Calvin, Pruis maintained his private practice as a CPA from which he retired in 2016 after serving his clients for nearly 50 years. To honor Pruis’ legacy at Calvin, in 2008, a former student Ed (and Ruth) Zeilstra established the Pruis Rule of Law Endowment which now funds the annual Pruis Lecture Series, which is sponsored by the Henry Institute and inspired by Pruis’ longtime interest in the topic.

And while the lecture series has the Pruis name on it, so does North Hall 190. It’s the office of one of his sons, Dirk, who is an assistant professor in the department his dad helped launch.

“I’m incredibly honored and proud to serve Calvin and continue my Dad’s legacy at Calvin by teaching in the same department that he really helped get off the ground over 50 years ago.” 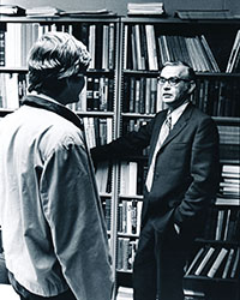 Donald Pruis talking with a student.