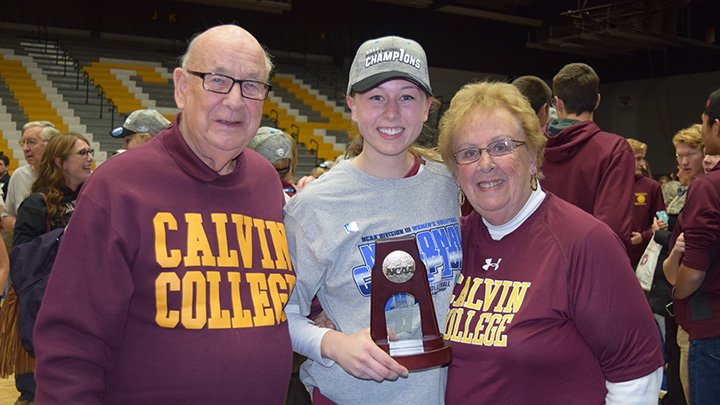 Don and Shirley Lautenbach grew up in the same hometown, but their first meeting happened 4,000 miles to the east.

“They met on the opera steps in Paris when they separately traveled to Europe as young adults with friends,” said Kim Lodewyk, one of their daughters.

Over the next 66 years, they worked together to build quite a legacy. In late October 2020, just eight days apart, Shirley, 89, and Don, 93, died following battles with COVID-19.

Don is remembered by his friends, former colleagues, and family as someone who was kind, gentle, and loving, trustworthy, faithful, and unbelievably organized.

Shirley is remembered for being feisty, passionate, and a go-getter, for bringing energy into a room, having a fine eye to detail, and for being a prayer warrior.

The two shared similar values. They loved learning, traveling, athletics, and the mission of Calvin. And all of these loves were underscored by their love of Jesus and their love of people.

Don served in education for most of his life, as a teacher, administrator, and for 27 years (1965-1992) as director of admissions at Calvin. But his love for learning never retired. And neither did Shirley’s. At age 67, she received a master’s degree, and in their 70s and 80s, they served in leadership roles for the Calvin Academy of Lifelong Learning (CALL).

“Their entire lives were devoted to serving others, among them not only the fortunate members of the Calvin community, but others who had no affiliation with any college at all,” said Ray Vander Weele, who served with them as a leader in the program. CALL serves people 50 and older, offering a diverse program of classes, day and overnight trips, and activities to enrich its members on their lifelong spiritual, intellectual, cultural, and social journeys. Don and Shirley were integral to CALL’s success from its beginning in 1996.

“They strongly believed in education and were lifelong learners,” said Lodewyk. “They loved reading books, watching movies, attending lectures and anything else that would contribute to their learning.”

The Lautenbach’s gift of hospitality and their insatiable love for learning helped the CALL program grow from a couple hundred members when it started in 1996, to a few thousand today.

It was the Christ-centered aspect of the learning experience specifically that was so appealing to the Lautenbachs.

“Their commitment to Calvin was because they believed in what was taught and the importance of teaching and living out of the reformed faith and worldview,” said Lodewyk. “They believed in the mission of Calvin.”

They viewed their work with the CALL program as an opportunity to extend hospitality, to invite more learners to faithfully engage important conversations.

“Don and Shirley had a vision for the program and the importance of social gatherings for the CALL individuals,” said Ken Erffmeyer, vice president for advancement at Calvin, who as a student in the mid 1980s worked for Don in the admissions office. “They also saw it as an opportunity to expand the Calvin community to non-Calvin individuals.”

“Shirley was particularly keen on welcoming new folks to CALL, particularly if they were not a member of the Calvin or CRC community,” said Vander Weele. “Because she was instrumental in extending CALL to those outside these communities, that group comprises over half of all CALL participants! They [The Lautenbachs] were sincerely interested in the health and well-being of everyone with whom they came into contact.”

“They were fiercely competitive and Calvin SuperFans!” said Lodewyk.

“According to their daughter, Kim [Lodewyk], Shirley took personal responsibility for some of our wins because of her prayers,” said Amber Warners, women’s volleyball coach at Calvin.

“They were avid fans and would follow the teams,” said Erffmeyer. “I have great memories visiting them in Virginia, Texas, Illinois, Wisconsin, etc. They liked our teams to win and display excellence.”

While Don had coaching in his blood and was instrumental in helping start the South Christian High School football program, a big driving force behind their fandom of Calvin athletics was their familiarity with some of the players on the field. The Lautenbachs had five children, 13 grandchildren, and 20 great grandchildren, a number of whom competed at Calvin.

The Lautenbachs dedication to their family may be their greatest and most enduring legacy. After all, their children, grandchildren, and great grandchildren have had a front row seat to lives well lived.

“They gave all of their kids, grandkids, and great grandkids and spouses a devotional every year for Christmas.”

“Don and Shirley were a one-of-a-kind couple. They were always ready to lend a hand, say a prayer, or give a word of encouragement. They lived their lives as faithful servants of our Lord and Savior,” said Warners. “They also leave behind amazing children and grandchildren, many of whom have touched the lives of many people of all ages.”

“They had so much passion for Calvin and represent the pillars that have invested their time talents to make Calvin what it is today,” said Erffmeyer.

The Lautenbachs are survived by their children Kris Skinner, Kerri and Brian Diemer, Kim and Bill Lodewyk, Doug and Jackie Lautenbach, Kelli and Kevin Schutte, 13 grandchildren, and 20 great grandchildren.