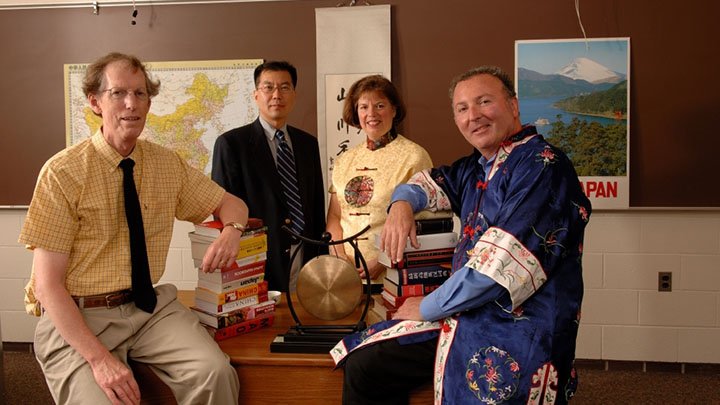 Professor Emeritus Dan Bays (far left), internationally renowned for his scholarship in history, religion, and China studies, served on Calvin's faculty from 2000 to 2012 and launched the Hubers Asian Studies Program.

As an undergraduate student at Stanford University, Daniel Bays became captivated by Asia—and one country in particular.

“China just grabbed me,” he would later say.

After earning his BA in history from Stanford, Bays would go on to earn an MA in far Eastern studies (China) and a PhD in the history of modern China from the University of Michigan. China would become an “intellectual fascination” (as Bays would say), a research focus, a place to explore the intersection of faith and culture, and a popular travel destination for Bays.

Bays, a voracious learner, dedicated scholar, and professor emeritus of history at Calvin, passed away Thursday, May 19, at age 77, following his battle with Parkinson's disease.

Bays spent more than 25 years of his academic career teaching at the University of Kansas, where he served as director of the Center for East Asian Studies and twice as the chair of the history department. His scholarly travels included a National Endowment for the Humanities funded research project for the British Museum in London, and Fulbright scholarships to Taiwan.

In 1984, while teaching at the University of Kansas, Bays was tasked with a major research project on Christianity in China by John Fairbank of Harvard University, the father of China studies in the U.S.

Bays directed the project, which supported top scholars in their research on aspects of Chinese Christianity. The resulting 1996 volume, edited by Bays, opened up a new field in modern China studies.

Bays came to Calvin in 2000 to serve as the prestigious Spoelhof Teacher-Scholar-in-Residence Chair. In 2002 he joined the faculty of the history department and led the college’s efforts to create an Asian studies program.

The resulting Hubers Asian Studies Program, funded in large part by the support of David and Shirley Hubers, launched at Calvin in 2011 and is now directed by professor Larry Herzberg. The program has grown to provide progressive language instruction in Chinese, Japanese, and Korean, and in-depth study of the history, religious traditions, philosophical schools, economics, politics, and fine arts of Asia. Bays’ efforts helped launch this immense academic undertaking, making Calvin the only Christian college in North America to offer comprehensive study of the languages and cultures of east Asia.

Together with Herzberg, Bays also founded the Bays-Herzberg China Semester Abroad Scholarship to strengthen students’ passions for and understanding of Chinese culture and language.

“I was truly privileged to have partnered with Dan Bays for 12 years in growing the Asian Studies Program at Calvin College,” said Herzberg. “For his many years as Director of Asian Studies, Dan gave generous grants to many of our faculty for travel to Asia to help them create new courses related to that part of the world or to do research related to Asia. He brought in many notable guest speakers to help inform the Calvin community about matters related to China and Japan.”

In the days following his death, tributes to Bays have poured in from across the country and beyond, with scholars from institutions such as Westmont College, Whitworth University, Yale University, and the Chinese University of Hong Kong applauding Bays’ impact in his field.

“Dan was not only a widely respected and internationally known scholar on Chinese Christianity, but he was also universally loved for his generosity, his wit, and his kindness,” said Kristin Kobes DuMez, chair of the history department. “He loved his scholarly work, and he never seemed to tire of it.”

Phil Holtrop, professor emeritus of religion, said of his former colleague: “[Bays] meant much to all of us, and we have all lost a friend, a man of immense integrity, a model scholar, and a giant respected in China studies as few will ever be.”

In many tributes, Bays is remembered as a scholar willing to share his work broadly and to mentor others in the field.

“Although Dan was a celebrated scholar of international renown, he remained an extremely humble and kind man,” said Herzberg.  “He was always incredibly nurturing and supportive of both his students and his colleagues, including me. Dan was not only my partner in building the Asian Studies Program at Calvin, but was my mentor and dear friend.”

Joel Carpenter, director of the Nagel Institute for the Study of World Christianity, noted: “Dan was admired and respected because of his scholarly depth and achievements, but beloved by the community of scholars because of his never-failing eagerness to support and encourage others. He was a shining example of what it means to follow a call from God to be a mentor and a scholar.”

Diane Obenchain, former professor of religion at Calvin, said of Bays: “He was always lifting up the other, the student, the friend, the colleague, for prayer, fellowship, and mutual learning. In Dan's company, one was always certain the Holy Spirit was there in the midst of conversation.”

Bays is survived by his wife, Janice (a former pianist and vocal coach in Calvin’s music department), his adult children, Kristen (Chris) and Justin (Sarah), and his grandchildren. A celebration of Bays’ life will be held on Sunday, May 19, in St. Louis, MO. Bays’ family requests that any memorial gifts be made to support the Bays-Herzberg China Semester Abroad Scholarship.