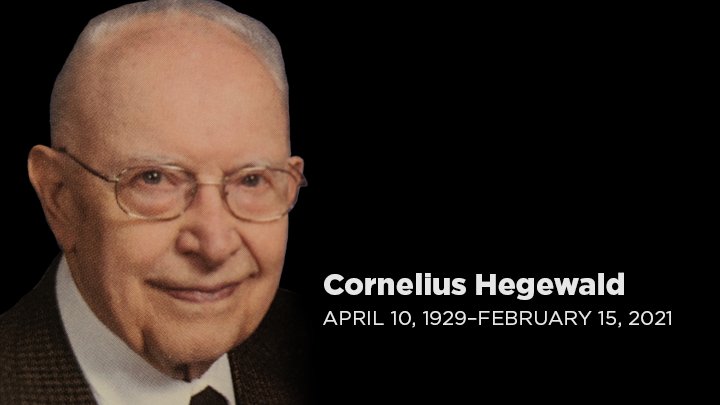 Robust singing, stories of his heritage, and cultural dress are all a part of the indelible impression that German professor emeritus Cornelius Hegewald made on hundreds of students at Calvin over nearly three decades.

“I can still see him in his lederhosen, playing the accordion and singing with gusto the song ‘Tomatensalat,’ which I think is tomato salad,” said former student Bob Bolt ‘80. “He made the class a German experience.”

Growing up in Leipzig, Germany, inducted to Hitler’s Youth at age 10, and drafted at age 15, Hegewald captivated students with his stories of life during World War II.

“I remember being glued to his stories of growing up in Nazi Germany and wondered that it made him the kind man that he became,” said former student Harold Pranger ‘84.

“Cor loved to tell stories about how he started an apprenticeship in his father’s furrier shop or when he, as a young American POW, witnessed on April  25, 1945, the meeting of the Soviet and American troops at the Elbe River in Torgau,” said German professor emerita Barbara Carvill.

From a German soldier to a master furrier to an accountant, Hegewald eventually made his way to the United States and in time to Calvin University, where he came to pursue a degree in teaching.

Hegewald said once in an interview that he wished to attend Calvin because he wanted a Christian education, though he had not grown up in a faith-based home.

Upon starting at Calvin, he felt challenged by much of the Christian theology and found a Christian Reformed pastor who was willing to tutor him on the weekends.

Hegewald graduated from Calvin in 1962 and attended graduate school at Michigan State University before returning to teach at Calvin in 1965.

He successfully taught the entire range of classes in the German department, and his “Nazi Germany” interim class consistently attracted large numbers of students from all majors.

“Hundreds of Calvin students took his class "Nazi Germany," said former student and longtime family friend Doug Bratt '80. "He told us riveting stories of growing up in Nazi Germany that gave us personal and nuanced understandings of a horrific time. While he was a tireless promoter of German language and culture, he was also aware of its complicated past.”

A love of culture

“The highlight of Cor Hegewald’s contribution to the department’s extracurricular activities was at the yearly Oktoberfest. He would appear in his Lederhosen with a big accordion and regale the crowd with typical German drinking songs,” said Carvill. “Unforgettable is his performance of ‘Tomatensalat,’ which started very slowly and with every repetition had to be sung faster and faster so that at the end, only Herr Hegewald was left able to play the unforgettable ditty at acrobatic speed.”

But Hegewald’s love for culture went beyond just German. “He was a person who loved the uniqueness of every culture he experienced,” said Bolt. “I remember him describing some of the uniqueness of the American culture that he discovered when he arrived here, which he really appreciated.”

“Herr Hegewald loved teaching German language, sure, but even more he wanted students to grow in their understanding of people and culture and history,” said former student Lisa Baar Hoogeboom '89. “He helped me understand one of the key reasons to learn another language: to listen to people’s stories so that we can learn to connect with, learn from, empathize with, and love them.”

A love of people

Hegewald also taught empathy by example: “I am also personally grateful to him because of the care he showed me when I was in a serious car accident during my freshman year that landed me in the ICU,” said Hoogeboom. “Herr Hegewald went out of his way to assure me that he would make a way for me to do well in his class even though I had missed so much of it … . That was 35 years ago, but reflecting today on his care and grace still brings me to tears.”