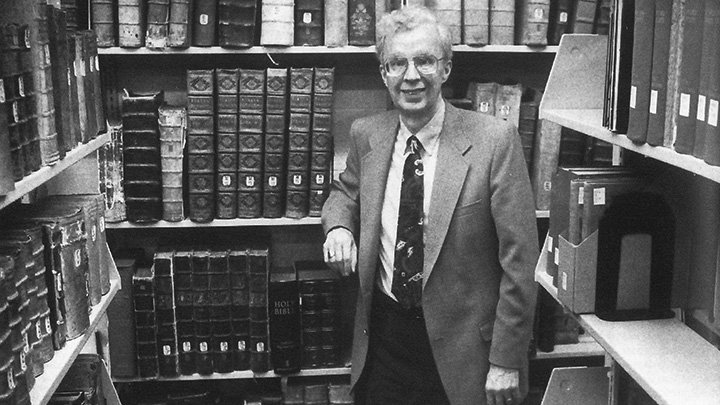 Kind and generous. Affable and self-effacing. Intense and earnest. Dedicated and funny. Eager to teach and serve. Shy, with a booming voice.

“Once you start thinking about Conrad it is hard to stop—he was one of a kind,” said Paul Fields, theological librarian and curator of the Meeter Center.

“He was a wonderful and unique human being, and it was a pleasure to be in his presence,” said Jim Vanden Bosch, English professor emeritus.

On Tuesday, November 24, Conrad Bult, 86, died peacefully at his home in Arizona. Bult graduated from Calvin in 1957 as a history major. After a two-year stint in the army, he continued his education at the University of Michigan, receiving two master’s degrees in history and library science.

After a handful of years working as a librarian and teacher in a pair of Chicago-area high schools, he returned to his alma mater, initially as the periodicals librarian for the Franklin campus. But, he would soon move to the Knollcrest campus where, until his retirement in 1999, he oversaw the periodicals, rare books, and reference departments at the Hekman Library.

While he had an unmatched knowledge of every square inch of Calvin’s collections, it was how he used that knowledge that shaped the Calvin community.

“My acquaintance with Conrad extends back to the ‘60s—my student days at the Franklin campus,” said Dale Cooper, chaplain emeritus. “Commuter student that I was, the better part of each day that I was on campus I spent in the Hekman Library. Early in my freshman year, Conrad took the initiative in becoming acquainted with me … It was the beginning of a decades-long friendship which extended all the way to my Calvin-chaplaincy days and beyond when we met together each morning with a small band of fellow Calvin emeriti for morning coffee in the ‘Calvin Emeritorium.’ Conrad was an ardent conversationalist ‘than which none greater can be imagined.’ Oh, the precious memories I have of that man, and our times together.”

“I first met Conrad when I was a student in the early 1970s. I was shy approaching the massive card catalogs at the start of a term paper, and Conrad pounced,” said Joel Carpenter, provost emeritus and senior research fellow at the Nagel Institute. “‘Hey fella, what are you looking for?’ It didn’t take long before Conrad had showed me how to rifle through the subject catalogs, run my keywords against the great keyword bible published by the Library of Congress, and then to begin on the big, fat, published article indexes … I was amazed at what I was able to amass in a first voyage to the library, thanks to Conrad.”

Along for the journey

For Bult, every library-goer was on a quest, and he was the expert guide. He knew where to point people to and when he came across a new challenge, he was excited for the journey ahead, determined to find a path forward.

“He would simply not give up on a reference question,” said Kathy De Mey, who took over as reference librarian when Bult retired, and considered Bult a mentor. “I heard that sometimes he’d even chase library patrons out the door, shouting that he’d found an answer (after they had left the building).”

“He was always so eager to help, and I have to think that part of that eagerness was his own high-voltage curiosity. Whatever your topic was, Conrad got interested in it too,” said Carpenter.

And his curiosity led him to places others weren’t interested in going—like to basements of buildings that stored boxes of old books. “Conrad sorted through all of these dusty and sometimes musty books in search of a rare ‘treasure’ and of those that would be valuable for the library collection’’ recalled Marv Monsma, who worked alongside Bult for three decades, serving as library director for most of that time.

While most of the time the searching didn’t lead to any major discoveries, just decisions on whether to keep a book or sell it at the used book sale for 50 cents or a dollar, one search turned up quite a treasure. And that it came so late in his career, the year before his retirement, is a testament to his unwavering curiosity and his dedication to discovery. In 1998, he discovered a 1545 Italian translation of John Calvin’s Genevan catechism, the only known copy in North America. The volume is now housed in the Meeter Center.

That discovery brought him hero status for a few months, earning him a cover photo in Indiana Jones garb on the annual Chimes spoof issue. But those who knew him, understood that’s not what he sought. He is remembered as someone who showed up day in and day out, ready to help people find what they were looking for, and oftentimes way more than they expected.

“Thousands of students have received much more help than they could have imagined when they ran into Conrad, over by the catalog or the microfilm drawers,” said Carpenter. “You came away with an armful of ideas and books, and with the comfortable feeling that you had a friend in the library.”

Conrad was a bibliophile—that goes without saying. But what I remember most about him is his passionate care for and willingness to help others,” said Cooper.

Inspiring the next generation

And that included children. While Bult, and his wife Delores, did not have any children of their own, their love for kids was evident.

“Whenever our children would come to the library to visit me, Conrad would show up in my office with a couple dollar bills which he would give to them. We began to suspect that our son would ask to go to the library because he hoped Mr. Bult would be around,” said Fields.

“When I worked at the reference desk, Conrad would sometimes walk in. He seemed to not be able to stay away, actually (but I never got the idea he was checking up on me),” said De Mey. “He’d see me and stride over, press dollar bills in my hand, and say the money was to be spent on books for my nephews and nieces. That’s how much he cared about children reading good books.”

And he and Delores have spent much of their lives making sure kids have access to an ample amount of reading material. In their 50 years of collecting, they amassed 5,500 children’s books, each selected for its beauty, rarity, and the delight it brought them. In 2019, the collection was donated to Hekman Library and it is housed in the library’s rare book room.

“It is a stunning collection of children’s books—primarily from the Victorian period,” said Fields. “The Bults were not hoity-toity about their collecting—they would look at anything, but condition was everything—it had to be of the highest quality; there could be no rips, tears, damage, mold, etc.”

The collection is of the highest quality … a reflection of its collector.

“He was a one-of-a-kind friend and colleague in Calvin’s educational mission,” said Vanden Bosch.

“He served us all humbly, promptly and sincerely, as a brother in the Lord,” said Carpenter.

“Conrad’s was a piety that reminds me of water pipes under the street—performing vital service to countless others, but never calling attention to themselves,” said Cooper. “It’s people like Conrad who, through the years, day in and day out have offered themselves and their gifts to serve others at Calvin, and in so doing have contributed their gifts to make Calvin the precious Christian community that it is.”

In his retirement piece in SPARK magazine, Bult made this statement:

“I’ve always had a delight in books and sharing what they have to say. Have I written 50 brilliant articles during my career? No. I hope I’ve made my best contribution by helping people.”

It’s clear he has.

Bolt is survived by his wife Delores, who worked for the Financial Aid Office at Calvin for more than 20 years.

One of a kind

Though described as shy, Bult was probably the loudest person in the library.

“He had a booming laugh and voice which was heard throughout whatever library floor he was on,” said Fields.

“All of us can attest to that, but we do so endearingly! After helping someone in person or on the phone, he would invariably say very loudly, ‘If you need further help, just ask CONRAD J. BULT. That’s B-U-L-T.’ Students and staff within earshot chuckled about that,” said Monsma.

He clearly had a sense of humor.

“He was very funny,” said Vanden Bosch, “and he could be very dry when the occasion arose: ‘Why, Mr. Vanden Bosch, far be it from me to suggest that you’ve been looking in the wrong places, but a scholar of your intelligence will almost certainly be glad to look more carefully at these shelves right here.’”

“Long after he retired and I happened to mention to someone that I was a librarian at Calvin College, without any hesitation they would ask, ‘is that tall funny man still there?’ He sort of represented the place. This was because he loved Calvin and what he did here. He set a standard for his time,” said Fields.

“His statue should be by the library, and every student librarian should be told the story of Conrad Bult,” said Carpenter.