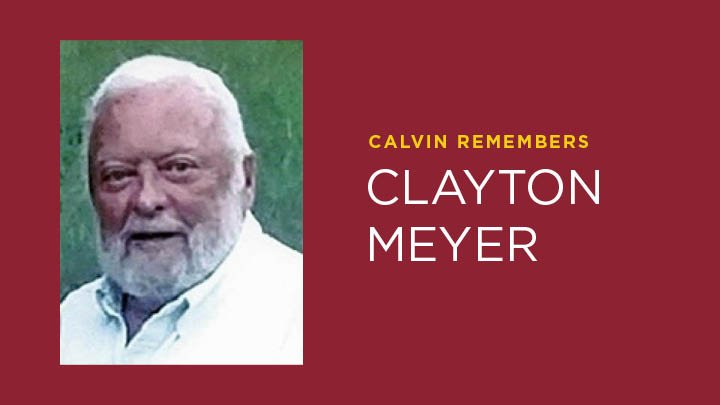 “Clayt’s legacy will live on for a long time, but it will be in things people take for granted every day and [things] very few people see,” said Joel Bosma.

Clayton (Clayt) Meyer, 75, died on August 6, 2022. For three decades, he was working literally underground and behind the scenes to make Calvin University a place where students thrive.

“He installed the plumbing and heating pipes in the tunnels and many upgrades that the students and staff will enjoy for a long time,” said Bosma, who was a plumber alongside Meyer on Calvin’s campus.

A lasting foundation and impression

“He was here building the foundation of the school, literally installing the pipes to the tunnel walls,” said John Haley, who worked with Meyer at Calvin University. “He stayed and finished out his career until retirement.”

And Haley said Meyer continued to provide support to the university even after he officially retired.

“He was a wonderful man to know even for a short period, he made a lasting impression in my life,” said Haley.

Both those who knew Meyer for a short time, like Haley, or for decades like many of his co-workers, centered their reflections on a few key things: his work ethic and his sense of humor were at the top of the list.

“When we had nasty, dirty jobs no one else would have wanted to do, he would just joke around and make the best of the situation and take satisfaction in a job well done,” said Bosma.

“Even when a large task was on hand and tough to complete, he still had a great sense of humor about him and ‘[a] we are not done till it's done attitude,’” said Haley.

“He had a slightly gruff exterior, but you quickly discovered his willingness to help solve your problem along with his wry sense of humor,” said Lori Keen, lab services manager at Calvin.

Meyer will be remembered for the foundational work that he did day-in and day-out that literally supports the functioning of the Calvin campus and will for years to come. But, it’s how Meyer cared for the people he worked alongside that’s part of his legacy too.

“My son worked for physical plant during the summers of his Calvin student days,” said Keen. “More than ten years later, Clayt still asked about him.”

Meyer will be dearly missed and lovingly remembered by his four children, with his first wife, Donna Waayenberg; Chad Meyer and his children, Mariah and Colton; Jodi (Mark) Whitcomb and their children, Cody, Kailee (Matt) Reiffer, and Ethan; Jill Meyer; Nate (Jill) Meyer and their children, Logan, Crew, and Remy. Clayton married Reda Dodds on August 12, 1999. Together, they enjoyed 23 years of marriage. He is also remembered by his two stepsons, many step-grandchildren, brother and sister, and many other family members.