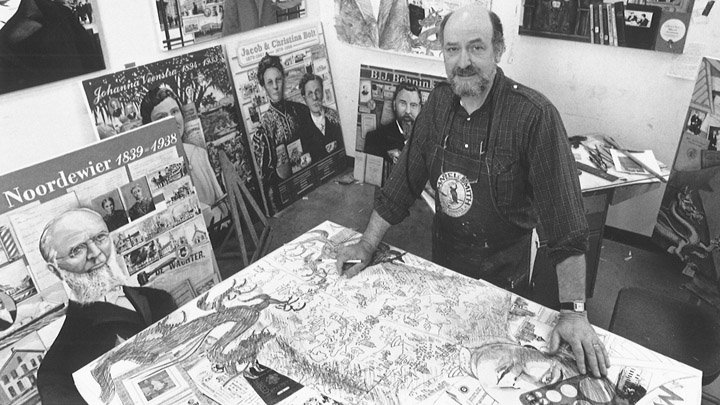 Longtime Calvin art professor Chris Overvoorde is remembered for his dedication to the university and his masterful artistry.

Best known for his expansive paintings of clouds and his gracious spirit, Chris Stoffel Overvoorde died on September 3. He was 84.

Overvoorde spent 31 years in the art department at Calvin, from which he retired in 1997.

“Chris was a fantastic colleague, who cared deeply about his family, Grace Christian Reformed Church, and Calvin,” said art professor Henry Luttikhuizen. “He was preoccupied with helping individuals and communities flourish. He worked hard, but he was always generous with his time, offering guidance and assistance to those in need.”

Prolific was another word used to describe the accomplished artist. Overvoode leaves a legacy of more than 2,000 works, including paintings, drawings, prints, and designs.

“I’ve been around here for so long, my stuff is all over the place,” said Overvoorde, in an interview with Spark, upon his retirement.

His painting, Three Tree Triptych, an example of his iconic cloud paintings, greets visitors on the east side of the Covenant Fine Arts Center.  Numerous other pieces are part of the university’s permanent collection and are exhibited in the Prince Conference Center, among other places.

A career in art

Overvoorde grew up near Rotterdam, the Netherlands, where he always had a prowess for drawing and painting but was unable to pursue art as a profession. A decision to emigrate from the Netherlands alone as a young man of 22 proved challenging but also life changing.

“His struggles and successes as an immigrant completing his studies at Kendall College of Art and Design in Grand Rapids and the University of Michigan were remarkable,” said former colleague Frank Speyers.

Upon receiving his master of fine arts degree, he was recruited to Calvin, where he would spend his entire teaching career.

“My memories of Chris were his energy and his absolute commitment to his students,” said Elaine Harlow, a former student and current Calvin professor. “He was approachable, encouraging, and supportive of me and my endeavors. I am beyond grateful I had him as a professor, and his pushing helped make me the painter I am today. I teach some of the same techniques that he instructed in our class years ago and am passing on some of his immense knowledge to the next generation.”

In 1993, Overvoorde spent a sabbatical on the Alberta prairie. While always interested in landscape paintings, he gained a deeper appreciation for open expanses and clouds during his time there.

Overvoorde was quick to use his artistic talent to benefit others around campus, as well. For more than a decade he served as the art director of Calvin’s alumni magazine, Spark. For this he was recognized with the university’s Outstanding Service Award in 1994.

“Chris was a person of boundless curiosity and joy,” said Mike VanDenend, former university alumni director. “We spent many hours together designing Spark in the days when one would hand set the type, and his creativity was evident on every page. He inspired many alumni artists and art lovers with his enthusiasm about how paint can transform a canvas to bring meaning and delight.”

Overvoorde continued to produce art long after his retirement. “He lived art with a twinkle in his eye,” said Bonzelaar.

Added Luttikhuizen: “For Chris, making visual imagery was not only a means of sharing his personal convictions, but it was also to be performed in faithful response to God in service to others. He felt the same way about his teaching. Although accomplished as a painter and printmaker, Chris took greater delight in seeing and hearing about the work of his students and colleagues.”

“Heaven has gained an artist with a deep appreciation of creation,” said VanDenend. “Chris’ cloud-filled paintings taught many of us to look at the sky with greater awe and awareness. I take heart knowing he has a glorious new vantage point from which to see them.”