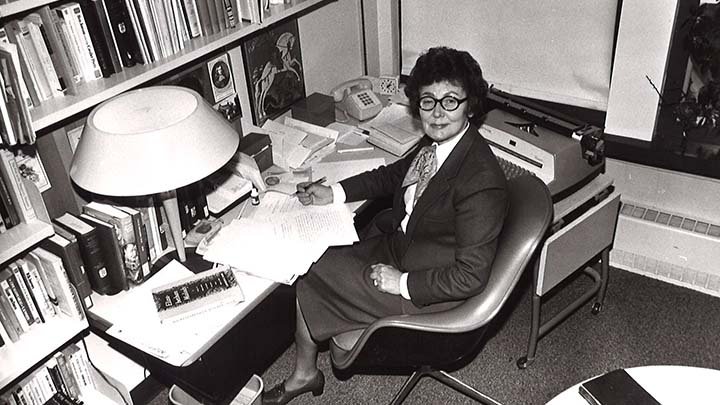 From the time Charlotte Otten ‘49 stepped onto Calvin’s campus to the time she stepped into glory she was invested in people.

“I remember her as someone who took the time to take an interest in my scholarship, and encourage me in it,” said David Urban, professor of English at Calvin University.

Otten, 95, died on Friday, November 12. She taught in Calvin's English department from 1977 to 1991, but was no stranger to the university for the next few decades.

“I met Charlotte in fall 2003, well after she retired, when I started as a new professor at Calvin,” recalls Urban. “I remember her coming through the department from time-to-time and she would often stop to talk with me.”

And Urban wasn’t the exception, but rather the rule.

“By the time I arrived at Calvin in 1996, Professor Otten had been retired for five years,” said Rienstra. “She was a wonderfully encouraging model to me as a bewildered newbie professor plagued by imposter syndrome. I was always so grateful for her kindness and wisdom.”

Otten cared about people and their contributions to the world. “She was a strong proponent of both creative and scholarly work and publication in the English department,” said Gary Schmidt, professor of English at Calvin. “She saw this work as a splendid obligation for professors, and as a way of working out our kingdom work in the academic arena.”

Otten led by example. She was a prolific and eclectic scholar.

“Char approached life and literature with wonder and curiosity,” said Don Hettinga, a professor of English, who Otten encouraged to apply to teach at Calvin in the 1980s. “Her range of publications give some indication of her eclectic interests, from studies of plants in sixteenth and seventeenth-century poetry to renaissance women writers, from literature about birth to literature about werewolves, from writing about children’s literature to writing literature for children.”

Hettinga noted that during the years they taught together it would be a rare week when she wasn’t sending off a couple of poems for publication.

“She started writing poetry while in Wales leading a group of Calvin students,” said Hettinga. “When Walford Davies, a Welsh poet and her colleague challenged her to write along with the students, Otten picked up the pen and never stopped.”

“She had a full and impressive career as a beloved teacher, respected scholar, and delightful poet,” said Rienstra. “Quite an inspiration.”

There’s no doubt Otten was a well-accomplished scholar, but it is the investment that she made in those she worked alongside and those she encouraged and mentored well into retirement that has and will continue to see the greatest returns.

Even years after retirement, “she still came in most days, all dressed up in her usual elegant way and worked in her emerita office,” recalls Rienstra. “That meant she was down in the dungeon with us new people and our faithful adjuncts. This was back when we used to have a bunch of auxiliary English department offices behind the CFAC stage.”

“Char has many legacies here, one of which is the foundation she laid for the teaching of children’s literature, exemplified by her ground-breaking work with Gary D. Schmidt in The Voice of the Narrator in Children’s Literature which included her perceptive and savvy interview with Maurice Sendak,” said Hettinga.

Today, Schmidt continues to author best-sellers in that genre. “Char was the second professor to bring the field of children’s literature into the department; the first was Mildred Zylstra,” recalls Schmidt. “I would soon join her in this field. I sat in on one whole semester of her classes in this field.”

“She impacted my life in many ways. She helped me improve my writing skills and clearly demonstrated how to integrate faith and learning,” said Bill Haverkamp, who had Otten as an English teacher his first year at Calvin. “Her prayers in my 8 a.m. classes were always thoughtful and memorable. I’ll never forget one that impacted me in a very profound way: ‘Lord of love, teach us to love. Amen.’ Simple, but profound.”

Through her life, Otten taught many of her students and colleagues to love writing, poetry, and one another. The scholarly work and the thriving relationships within the department now and for years to come really define her legacy.

Otten was preceded in death by her husband, Professor Robert Otten of the Classics department. She is survived by her sons Gib (Linda DeCelles) Otten; and Justin (Janice) Otten and her two grandchildren, Stephanie and Chelsea Otten. Services will be private. Those wishing to do so may contribute to the Robert and Charlotte Otten Scholarship at Calvin University in her memory.