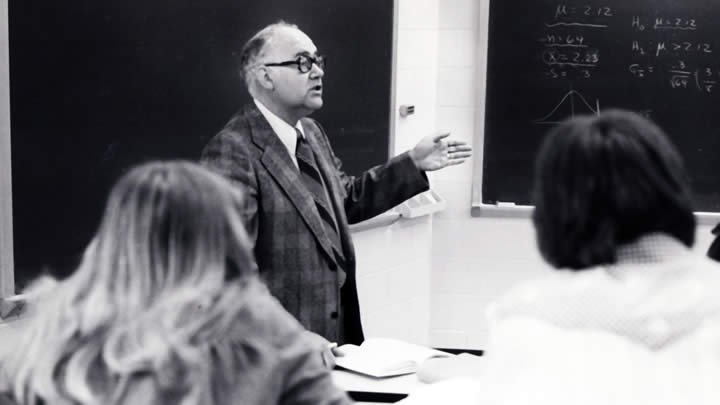 During his 35-year tenure, Sinke developed and taught the first Calvin course in statistics.

From railroads to singing to politics to statistics, interests were plentiful for Carl Sinke. The Calvin mathematics professor emeritus died on Jan. 20, 2016.

Sinke graduated from Calvin in 1949. He went on to earn both a masters (1951) and PhD from Purdue University. Following his graduation in 1954, he served in the U.S. army for two years before coming to Calvin as the first mathematician with a doctoral degree at Calvin.

“Carl chaired the mathematics department most years from 1964 to 1985,” said Calvin mathematics professor and dean Michael Stob. “This was a period of enormous change both in the personnel and curriculum, and Carl was a calm and steady presence in the department.”

During his 35-year tenure, Sinke developed and taught the first Calvin course in statistics. He also had a special interest in serving teachers of mathematics. During the “new math” era of the early 1960s, he directed several National Science Foundation-funded institutes for teachers at Calvin.

“Carl would teach anything,” said Stob. “He often taught upper-level courses as an uncompensated overload.”

Through a stern and gruff exterior, Sinke endeared himself to students because of his authentic concern for every student’s welfare.

“You didn’t want to come to class unprepared,” said Stob. “But it wasn’t long before most students realized that his door was always open and that he genuinely wanted every student to succeed.”

Sinke’s love of trains was widely known. “His interim on the railroads in American history was legendary and always filled early in registration,” said Stob. “His backyard train was ridden by many faculty children and in the days of the Knollcrest Festival, Carl would bring the train to campus to give rides along the sidewalk from the Commons to the Science Building.”

Sinke also occasionally engineered on the full-scale Coopersville–Marne railroad. “I once got a chance to ride with him in the engine,” said Thomas Jager, a former colleague. “It was quite a different experience from riding in a passenger car.”

Additionally, Sinke was a member of the celebrated faculty quartet: Three Johns and a Sink(e). John Worst, John Primus, John VanZytveld and Sinke sang at many college functions and sometimes opened for Glenn Bulthuis.

Furthermore, he used his leadership skills as a member of the Kentwood zoning board and later was elected to the Kentwood City Commission, where he served two terms.

Sinke will be remembered for his dedication to Christian education, his church, the community and to Calvin.

“As a colleague and department chair, Carl was always supportive and helpful,” said Jager. “I remember him as a teacher, colleague and friend.” 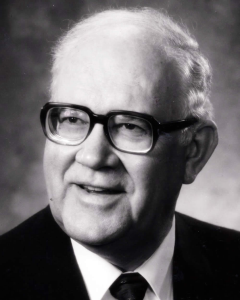