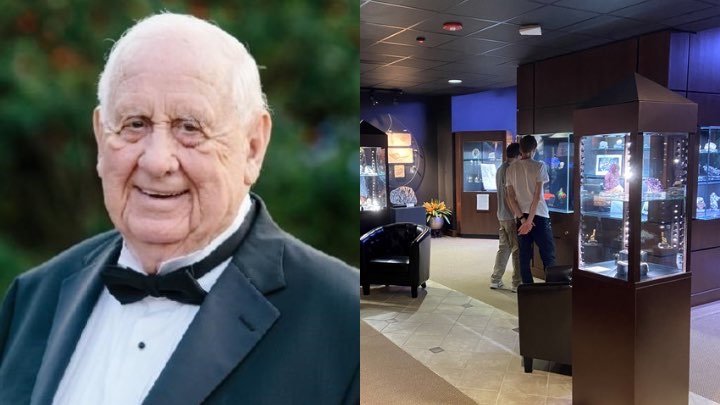 “It was a week of Christmas presents as I and student helpers went through the boxes and opened each in turn,” said Gerry Van Kooten, a geologist and professor emeritus of Calvin University.

Calvin University received these gifts in 2010. The sender? Bruce Dice.

Dice, 95, died on November 5, 2022. But he and the many gifts he sent back in 2010 live on in the hearts and minds of the Calvin community as what former Calvin president Gaylen Byker calls “some of Calvin’s most precious gems.”

“In his autumn years, he wanted to divest himself of a rather significant collection of minerals,” said Bob Berkhof, who was the executive associate to then-president Gaylen Byker when Dice decided to donate his collection to Calvin.

Dice had the opportunity to donate the collection to large mineralogical museums. But he chose his alma mater.

“Bruce wanted to donate his mineral collection to a place where it would make a difference,” said Van Kooten, who served as the Bruce Dice Mineralogical Museum’s first director. “The Houston Museum of Natural History certainly would accept it, but Bruce did not want the collection absorbed into a larger existing collection.”

He also wanted to curate a love for God’s creation in the younger generations. It’s a reason why he established the Bruce B. Dice geology scholarship as well, which funds a student curator of the museum each year.

“His contributions to the scholarship fund made a Calvin education possible for me,” said Jillian Herlinger, who has served as the student curator of the museum since September 2021. “While working as curator, his primary mission—to ensure anyone could enter and experience some part of the wonder of Creation—became something that grew near to my heart. This mission has stuck with me as I’ve considered my future, and in my future career I plan to incorporate some aspects of public outreach and the goal of sharing the wonder of Creation that I’ve learned during my time at the museum.”

Gregory Ian, a student docent for the museum, agrees with Herlinger’s sentiments. “The late Mr. Dice was greatly invested in the welfare of Calvin students especially in the GEO department … He was a kind, thoughtful man, who was willing to give back to the community.”

And he gave back his best. These weren’t just any old specimens. Some of these are about as rare as they get.

“It’s one of the finest mineralogical museums in the United States. It has specimens in it, minerals, rocks, gems, and fossils that are not even found in the Smithsonian Institution in Washington,” said Byker.

“His favorite mineral was crocoite, and thanks to him the Dice Museum has one of the very few samples of an extinct genus of fossilized octopi from the Cretaceous period,” said Ian.

While the Calvin geology department specifically and the Calvin community more generally has benefitted greatly from this beautiful museum, so too have thousands of people throughout west Michigan and beyond.

And it’s likely because of the careful thought Dice put into it, not sparing any detail.

“He had a vision of what he wanted and did not waver from it,” said Van Kooten.

“The specimens and cabinetry were unexpectedly gorgeous. They represent an enduring testimony to God’s beauty and serve as a unique community resource,” wrote Ralph Stearley, geology professor emeritus, in a memory book being prepared for the Dice family. (Note: Past visitors to the museum can stop by the Dice Museum to add their memories to the book.)

“There are many ways to organize a mineral collection: by structure, by chemistry, by location, by cost,” said Van Kooten. “Bruce organized the cases by color, so we had a pink case and a blue case, and a gold case, and others. Particularly for non-geology visitors, this made a stunning display.”

This fall marks a decade since the museum was established. During that time, more than 25,000 visits have been recorded, including K-12 classes, church groups, local rock mineral clubs, community groups, people visiting Calvin for conferences or events, visiting geologists, and members of the Calvin community.

“Mr. Dice’s love of beauty and geology as shown in minerals and fossils, and the way these spectacular parts of creation point to the Creator, are clearly displayed in the Dice Museum,” said Deanna van Dijk, geology professor at Calvin and current director of the museum. “The museum also shows that Mr. Dice had a vision and heart for engaging the next generations in the excitement of geology in combination with the joys of having faith in a great and loving God.”

“I will always be grateful to Mr. Dice for underscoring in my life the importance of studying and marveling at Creation as a way of understanding and worshipping the Creator,” said Herlinger.

“We in the GEO department will never be able to properly express our thanks,” wrote Stearley.

Dice is survived by his loving companion Carol Evans; daughter, Karen Dice Clemens; son, Kevin B. Dice, and wife, Elizabeth; and son, Kirk B. Dice, and wife, Margaret; and numerous beloved grandchildren and great-grandchildren. The funeral service will be held on Friday, November 18, at 9:30 a.m., with the visitation on Thursday, November 17, from 6-8 p.m. Both the funeral and visitation will take place at Zaagman Memorial Chapel (2800 Burton St SE, Grand Rapids, MI 49546). In lieu of flowers, contributions may be made to the Bruce Dice Mineralogical Museum at Calvin University.