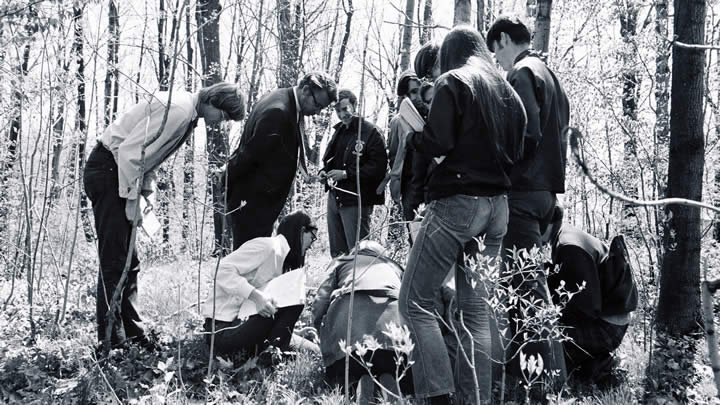 A woodsman at heart, a botanist by profession, Alan Gebben spent 38 years teaching biology at Calvin. Gebben, 84, died on Oct. 17.

He graduated from Calvin in 1954 and became an assistant in the biology department in 1955. He would later earn his master’s and PhD from the University of Michigan.

While he influenced many students within the classroom walls over nearly four decades, his legacy is attached to the woods, particularly those east of the Beltline in Calvin’s Ecosystem Preserve.

Gebben had a vision for what would become the Ecosystem Preserve and in 1974 obtained a grant to survey the then-10-acre woodlot. He mapped and measured every tree larger than two inches in diameter.

The data has been collected in five-year increments since, and now documents the history of more than 1,000 trees over a 40-year span.

He later served on the committee to establish the preserve, which was established in 1985 and has now grown to a 100-acre expanse, averaging 6,000 visitors a year.

In an effort to better acquaint students and the wider community to the botanical beauty of the Calvin campus, Gebben produced A Guide to the Trees and Shrubs on the Calvin Campus in 1993.

“Going on field trips with Al was a joyful and unforgettable experience,” said Calvin biology professor John Ubels, a former student and Gebben’s assistant for the preserve survey. “His love for creation was deep, and his knowledge about plants was boundless.

“I can still identify most of the plants that he taught us about—that’s a credit to Al, not to me,” he said.

Former student and colleague Randy Van Dragt remembered an exercise when as a student he was to measure lengths of plant parts that were intercepting a string in the Ecosystem Preserve. "My line happened to fall across a large and dense patch of poison ivy," said Van Dragt, "and it seemed legitimate to me to seek out some sort of exemption to wallowing in this toxic mess. I approached the difficulty by pointing out to Al the mass of poison ivy I was about to dive into and asked what I should do about it. He screwed up his face in a manner that indicated surprise, and said, 'Measure the length of the line intercepts of course.' No prospect of dermatitis was going to deter me from getting a complete data set!"

Gebben’s interest in botany and ecology expanded to the community as well. He served as a board member of the National Areas Conservancy of West Michigan and a member of the Michigan Botanical Club.

Long after his retirement, Gebben continued to attend weekly biology department seminars. "Al left an indelible impression on many as a friend, and effective teacher, good colleague and enthusiast of creation study and care," said Van Dragt. "He will be dearly missed."

Gebben was preceded in death by his wife, Genevieve. He is survived by his children, Laurie (Fred) Metzger, Dave (Claire) Gebben, Paul (Maureen) Gebben, and Lisa (Jeff) Hayes. 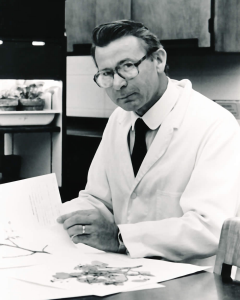 Al Gebben in a lab at Calvin. 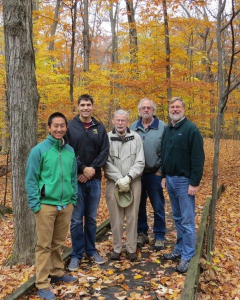 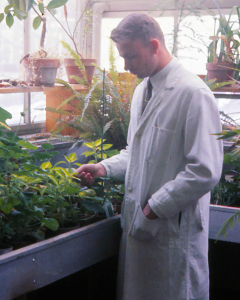