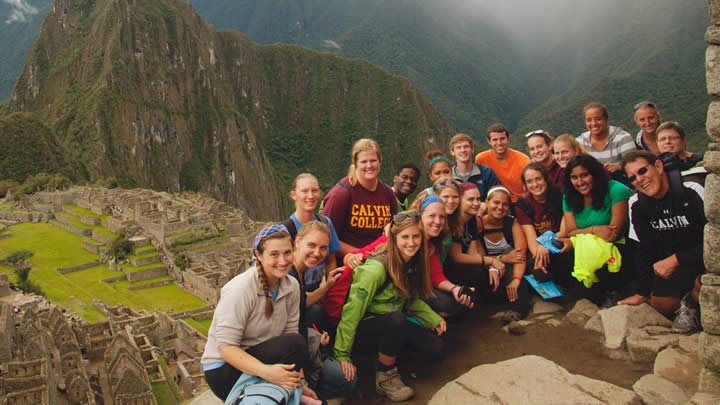 Don De Graaf (far right) poses with a group of students in the semester program in Peru.

When Don De Graaf talks about off-campus travel, his eyes light up, and his enthusiasm is contagious. So it’s no surprise that the Calvin College professor of kinesiology and director of off-campus programs has written a book on the subject, There and Back: Living and Learning Abroad (Calvin College Press, 2015).

De Graaf wrote the book for two reasons: First, he noticed there were a lot of how-to books on the market that addressed studying abroad, but there weren’t any books that tackled the topic from a faith perspective. Second, he said he wanted to tell some of the stories of students who engage in off-campus programs at Calvin.

“There was such rich learning that was taking place, and I wanted to capture some of those voices as they talked about their study-abroad experience through the eyes of their faith,” he said.

The book’s structure and audience

The book is divided into three sections: "Before You Leave," "The Experience" and "Returning Home." Each section is filled with student reflections and excerpts from blog posts by Calvin students who have traveled to places from China to Ghana to Peru, and dozens of places in between.

Although the book is not exclusively aimed at a Calvin audience, De Graaf said it is already being used in Calvin classrooms to prepare and support students as they embark on off-campus journeys.

“I think there’s a few intended audiences,” De Graaf said. “I think number one is a Christian college like Calvin who sends groups out either for a semester or an interim. Number two, it also could be used if a student were to go on a large study abroad program from a secular college, and the parent knows that it would be nice to have the student think a little bit about their faith during [their experience], and then they could use it as an interactive journal.”

De Graaf said the book could be a handy tool for those who are interested in study abroad but have not personally committed to a trip. Additionally, he said he could see it being used by people participating in mission trips.

The first section of the book stresses physical, mental and spiritual preparation, and De Graaf includes plenty of questions to consider and exercises to complete in order to reach that stage of preparation. In part two of the book, the first chapter is “Embracing the Journey,” and De Graaf includes one particularly poignant spiritual reflection by student Kate Parsons, who spent a semester in Honduras in 2013:

“How do you explain a new way of seeing God? See, here at Calvin or at our homes, we know where to experience God. ... When you go abroad, those times and places don’t always come with you. It’s hard to have that quiet time with a rooster crowing under your window. It’s hard to get a lot out of church when you can’t even understand what the pastor is saying. See, it’s hard when we’re comfortable to always tell the difference between experiencing God and all the habits we’ve built up around experiencing Him. In Honduras, those habits were gone, and we were forced to see God in different, unexpected ways.”

In the book’s final section, “Returning Home,” student Alice (last name withheld) wrote a letter to future travelers about adapting to life back in the United States after time away:

“After a study-abroad experience, how does one ‘make the moments last’ and not simply re-enter the life previously known? It’s a question I ask myself daily. How do I live now while paying homage to those who have touched my life in ways I struggle to understand? ... Cling to those moments. Work humbly to receive the lessons they hold. ... Prayerfully consider those lessons you’ve learned during your time abroad.”

De Graaf echoes that idea of dwelling well wherever you are in his final blessing to readers: “May you live and learn wherever you find yourself, and may you continue to move there and back.”