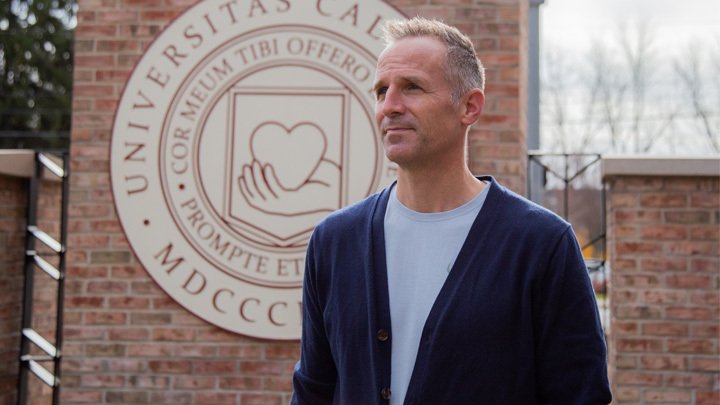 “As a white man, some of what I’m doing is wrestling with my own racial identity and what it means when it comes to justice. I have benefits from privileges I didn’t earn—and those come at the expense of others. And seeing that is incongruent with my understanding of imago Dei.”

Mark Mulder is chair of the Department of Sociology and Social Work at Calvin University. He’s been engaging in this internal wrestling for many years. In fact, some of the first research he conducted as a graduate student considered his own denomination’s history as it relates to racial issues.

But Mulder’s internal wrestling and reckoning has led to much public scholarship that helps Christians think about the intersection of race and religion more explicitly.

Now, decades of research later, he’s working with a couple of colleagues in higher education on some cutting-edge research.

Mulder and colleagues Gerardo Marti (Davidson College) and Kevin Dougherty (Baylor University), will work on a project with the Alliance of Baptists, a primarily white, progressive denomination comprised of about 130 congregations and 65,000 members. Lilly Endowment Inc. is funding the project with a $1 million grant to Davidson College. The grant comes through Lilly Endowment’s Thriving Congregations Initiative, a national effort to strengthen Christian congregations so they can help people deepen their relationships with God, build strong relationships with each other, and contribute to the flourishing of local communities and the world.

Over the next five years, the researchers will work closely with 15-25 congregations in the Alliance of Baptists to assess the current state of their congregations as it relates to being anti-racist, to understand what it means for them to be an anti-racist denomination, and then to work with them toward that desired anti-racist future state.

“Let’s be honest, there are a lot of white Christians who don’t think their denomination needs this internal examination, so we are grateful that the Alliance of Baptists is willing to be vulnerable,” said Mulder. “They recognize they may be part of the problem, and that there are things they can do better.”

“In the midst of a rapidly changing world, Christian congregations are grappling with how they can best carry forward their ministries,” said Christopher Coble, the Endowment’s vice president for religion. “These grants will help congregations assess their ministries and draw on practices in their theological traditions to address new challenges and better nurture the spiritual vitality of the people they serve.”

Mulder and his colleagues are well suited to speak into this grant project. All have published extensively on congregational dynamics and how they relate to race. Some of Marti’s work has been examining how churches use worship to attempt to be more multi-racial and both the promises and pitfalls of that approach. Dougherty has been a leading voice on how monochromatic Sunday worship continues to be in the United States. And Mulder’s written a lot on how white congregations have responded to demographic changes, among other things.

“We talk with each other a lot about issues related to sociology of religion and how it intersects with race and have co-published a number of articles together, but this is the first time the three of us will all work together on a major project,” said Mulder. “It was just a moment where our overlapping interests crystallized at the same time that Lilly had a major request for proposals under the rubric of thriving congregations.”

Mulder hopes that through listening and research, he, Marti, and Dougherty, will be able to identify an anti-racism curriculum that would be effective for the Alliance of Baptists congregation. And that’s just the beginning.

“We anticipate publishing a number of resources, from articles to op-eds to books as a result of this project,” said Mulder. “More and more Christians are interested in the issues of racial justice. I think what we are doing here will be a resource for Christians across the country.”

And a resource for Mulder’s students at Calvin University, who will benefit from real-time learning:

“I’m co-teaching “Church and Society” with Todd Cioffi, and we are looking at the church through the distinct disciplinary lenses of theology and sociology. And every semester the common thread is race and racialization in the U.S. church,” said Mulder. “So the things we learn from this thriving congregations project will certainly inform how we teach the class, and students will be privy to the new insights we discover.”

Mulder says he also imagines that there will be future opportunities for students to get more directly involved with the project through Calvin-funded research fellowships.