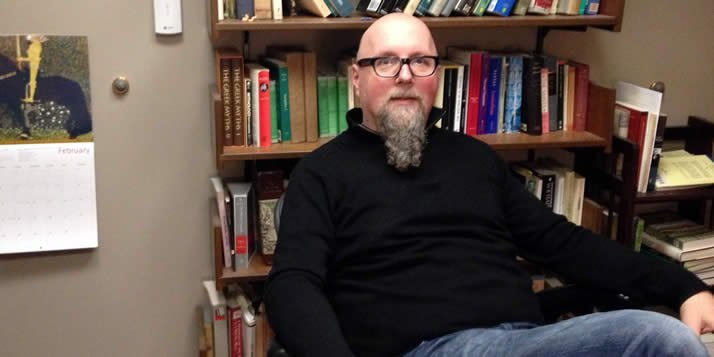 “The poet laureate is an ambassador for poetry, creating programs and projects to foster the writing and reading of poetry by the public,” explained a press release announcing Klatt as the poet laureate.

“When he first came to Calvin—and ever since—Professor Klatt has talked about the Biblical injunction to 'sing a new song unto the Lord.' He has seen his vocation as a poet to bring something new in terms of poetry into service to God,” Schmidt said.  “That notion seems to me incredibly important in any literary field. For Professor Klatt, this has often meant trying to do new things with language, or, as he puts it, 'letting language lead.' A writer with that kind of vision seems to me to be perfectly suited to lead us into thinking about how poetry may serve in our culture, especially as we move toward new understandings of what language even is.”

Honored to be chosen

While he knew that Schmidt had nominated him for the position of laureate, Klatt didn’t expect the Grand Rapids Poet Laureate Selection Committee to choose him for the job.

“I was surprised I was selected, only because there are a number of wonderful poets in city, and Calvin has never had a poet laureate before,” he explained.

“I think Grand Rapids has a very strong poetry scene already,” Klatt said. “The various institutions of higher learning in the greater Grand Rapids area have wonderful programs to promote poetry. Grand Valley State, for example, has a poetry night at the end of October. They’ll invite a high profile poet or two to read poetry and sign books. It’s very well attended. And Calvin has the Festival of Faith and Writing. So I want to build off the strong poetry culture [in Grand Rapids] — to encourage and cultivate it.”

While Klatt isn’t ready to reveal all the details about what he plans to do as poet laureate yet, he is especially excited about working with the youth of the greater Grand Rapids area. He already has an idea for a project working with elementary schoolers to write poetry about the history of transportation in Michigan.

“Between the auto industry and the freighters, our state has a particular commitment to transportation. I thought it would be fun for kids to learn about the history of transport in state and then write some poems that expressed their interest in [that history],” Klatt said.

Klatt is also considering putting together a poetry exhibition that incorporates graphic art.

“Most times, we think of poetry as an oral expression — coming off the page or inhabited by the voice of the poet. We have poetry slams and recitations, but often neglected is the way the poem looks on page — the way it’s presented as a typographical technology. I would like to foreground that aspect of poetry in some kind of exhibition. I don’t know if I’ve ever seen such an exhibition,” he said.

A vast body of work

Klatt has explored the ties between visual art and poetry before in his own work, most notably in his first collection of poems, “Interloper,” published in 2009. Klatt received the Juniper Prize for Poetry for the book.

“One of the primary aspects of poetry is its imagery — pictures with words. So the next step is to leave words behind and just go with pictures or symbols,” Klatt said, explaining the connection between poetry and visuals.

In addition to “Interloper,” Klatt comes to the position of laureate with a vast body of work known at the national level. He published a second collection of poems, “Cloud of Ink,” in 2011. The collection was awarded the Iowa Poetry Prize in 2010. In addition to the two books, Klatt’s poems have appeared in Blackbird, Denver Quarterly, Washington Square and “The Best American Poetry 2011,” among others.

While Klatt says he was always imaginative, his interest in poetry stems back to his college days. He took a class in creative writing, and while he loved all of the writing in the class, Klatt fell hardest for poetry. It stood out as a genre for the freedom it gave him as a writer:

“In poetry, imagination has no limits; anything is possible. With stories, you’re sometimes reigned in by the real world. You have to make the plots work, and there has to be consistency of characters. But in poetry, you’re free to participate in leaps of logic—wild leaps sometimes. That’s what I find so attractive about it.”