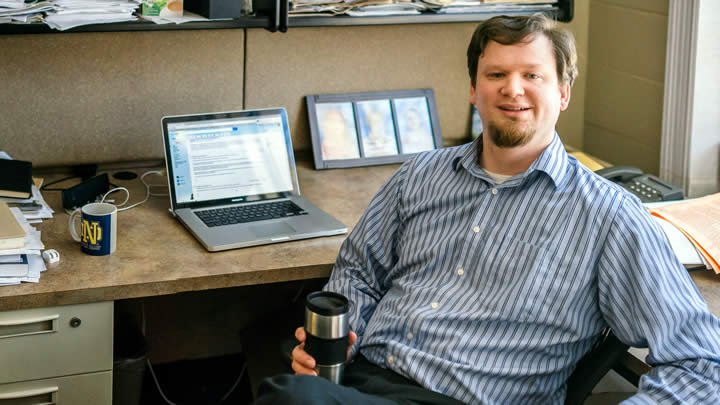 Jonathan Hill is a professor of sociology at Calvin College.

Every sort of university, private and public, must find a way to address the hot-button issue of human origins. Calvin sociology professor Jonathan Hill is less interested in the outcome of the debate itself and more concerned with why it is such a controversial issue.

“I’m less interested in solving the greater theological issues,” said Hill. “My work is looking at how Americans think about religion and science, particularly human origins. I’m not advocating a position, I’m just trying to understand why it’s so controversial.”

This summer, Hill and other professors from various disciplines working all over the nation will join together at Oxford University in England to discuss this issue and work on the dialogue between the disciplines of religion and science.

A program of the Council for Christian Colleges and Universities, Scholarship and Christianity in Oxford (SCIO), consists of two month-long seminars in the U.K. both this summer and during the summer of 2016. The project itself is called “Bridging the Two Cultures of Science and the Humanities.” According to Hill, the goal of this project is to stimulate research and start discussion on religion and science.

Hill will use the stipend that SCIO has given him to further research about the sociology of religion that he has already begun through the BioLogos Foundation, a foundation based in Grand Rapids that works to bring the disciplines of science and religion together.

The prospect of the project is exciting for Hill. “This is a new area of research for me. In the past I’ve studied how college affects students religious beliefs, and now I’ll get to study a slightly new topic and use others scholarly expertise,” he said.

Hill recognizes that this topic stirs many deep-seated opinions, even just among the Christian community. “There are a diversity of messy opinions,” he said. But even so, he finds hope in the diversity of opinion. “It makes us recognize that there may be Christian brothers and sisters that have different beliefs than we do, but we can still be charitable with each other.”

Not only does he hope this project starts conversations among the highly educated, he also hopes to start discussions among undergraduate and graduate students about this topic. After his summers in Oxford, Hill will leave with the tools to begin a new student-led club at Calvin. Hill will serve as faculty adviser for the club, which will work to engage issues of religion and science and continue to bridge the gap between the two.