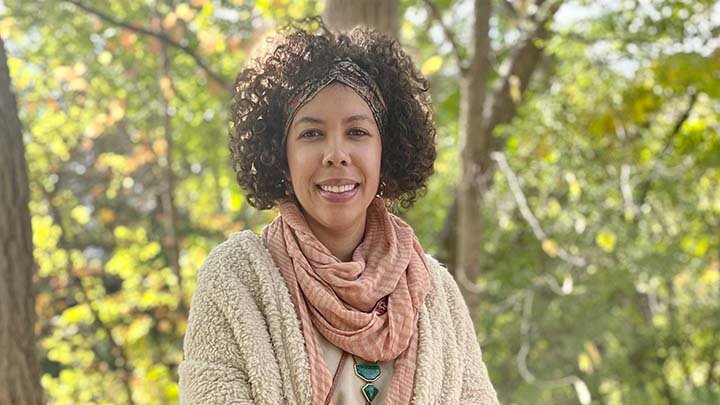 Emmalon Davis, a 2010 graduate of Calvin University, is the only philosophy professor nationwide to be selected for a fellowship from the American Council of Learned Societies (ACLS). The ACLS is one of the preeminent representatives of American scholarship in the humanities and related social sciences.

Davis is an assistant professor in the philosophy department at the University of Michigan. Through the ACLS fellowship and a faculty fellowship from the Notre Dame Institute for Advanced Study (NDIAS), she will be exploring Maria Stewart’s political thought as it developed during her short career as a public lecturer.

Stewart, the focus of Davis’ research project, was an abolitionist, feminist activist, and political thinker who worked in the public sphere beginning in the early 1830s. “She was the first Black woman to give public lectures to an audience of men and women within the context of civil rights,” said Davis.

Through her research, Davis is looking at Stewart’s political thought from a philosophical perspective. She said Stewart’s work has been difficult to characterize in terms of its methodology, in part because Stewart draws from so many different styles and approaches.

“One thing that’s particularly challenging about her work is the fact that she often appears to embrace contradictory approaches to freedom and civil rights,” said Davis. “While sometimes she seems to advocate for an insurrectionist approach which is rooted in kind of militaristic violence, grounded in self-defense, on the other hand she often appeals to a kind of moral persuasion that would rely on appealing to the rationality and sympathy of ones’ interlocutors, to try to convince them in a dialogic conversational way, as opposed to a more confrontational mode.”

So, while Davis sees the appearance of contradiction here, she’s determined to dig deeper, to try to make sense of the complexity.

“Part of what I’m interested in thinking about is how to make sense of and appreciate her political thought in a way that doesn’t try to explain away or flatten these contradictions but allows us to see these contradictions as actually illuminating some of the paradoxes that confront political activities in the public sphere.”

Equipped for this work

Davis, in part, credits her time at Calvin, specifically in the philosophy department, for equipping her for this complex work she’s now doing and encouraging her to dig deeper and embrace the complexity.

“I think there’s this ongoing quest or drive for understanding,” said Davis. “What was important in the philosophy courses [at Calvin] was this relationship between faith and our ability to understand complexity. There’s something important about a kind of faith that allows us to maybe sit with contradiction, understand it in the world, as opposed to explain it away immediately or see it as a failing of our inquiry.”

Davis speaks fondly of professors at Calvin who taught her “an appreciation for research and for the value of academic collaboration and engagement with diverse intellectual communities beyond one’s immediate environment.” Her experiences in the Calvin classroom also equipped her with “new conceptual tools to make sense of systematic social inequalities,” and showed her “that theory and practice are always connected, because how we respond to social inequalities depends on how we understand them.”

“These contributions to my academic future were especially formative,” said Davis.

Through the ACLS and NDIAS fellowships, Davis will write a series of papers for publication in the hopes of laying the groundwork for a book on Stewart’s political thought. She will do this work in-residence at the Institute at Notre Dame.