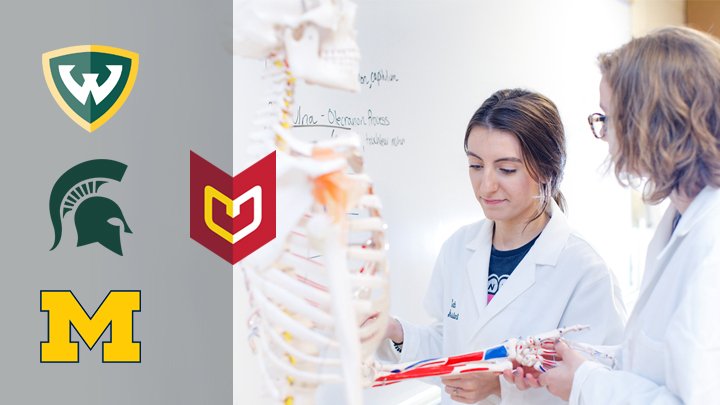 This fall, Jacob Charron is headed to Michigan State’s College of Human Medicine; Sam Goorman to Wayne State University; and Vanessa Elliott to the University of Michigan. All three are medical school-bound. While their pursuits are taking them in three directions—their path was paved by partnerships through Calvin University.

According to Calvin’s pre-health professions advising coordinator Teri Crumb, the average student applies to 14-16 medical schools, with students oftentimes only being invited to interview for a few. But, Charron, Goorman, and Elliott’s path was paved a little differently.

“The Early Assurance Programs with Wayne State University and Michigan State University allow Calvin students to apply at no cost to these medical schools,” said Crumb. She says, if accepted, the students are able to pursue a study abroad program or other personal interests in their senior year (if the student applied in their junior year) knowing that they will matriculate into medical school.

“For students who apply their senior year, this acceptance allows them to take a gap or growth year, working full-time, traveling and spending time with family before the rigor of medical school begins,” said Crumb.

Crumb says Calvin’s partnership with the University of Michigan begins with selecting an incoming freshman pre-med student. “The student receives advising about courses and activities that make them a strong applicant to medical school. The guaranteed interview is a big advantage for them,” added Crumb.

While the partnerships are so beneficial, so are the other many connections and opportunities students have along the way.

“My time at Calvin exceeded my expectations,” said Charron, a 2020 grad. “As an undergraduate I was able to get involved with research at MSU College of Human Medicine and looking at different genes and how different mutations are related.” Charron also was able to work on a paper as a first author. “That’s pretty important as an undergrad, most undergrads don’t get first authorships.”

As for Elliott, a 2021 grad, she volunteered with various organizations in Grand Rapids, including utilizing her Spanish minor with Exalta, a Spanish speaking clinic. She also did summer research with Kellogg Eye Center and a co-authored manuscript resulted from that experience. Her connection with Kellogg came during a public health seminar hosted at Calvin University.

And while the opportunities were important, so too were the classroom and extracurricular experiences at Calvin.

“Calvin’s coursework was rigorous. I know that the difficultly of the courses led to mastery that directly translated to my MCAT score and will eventually relate to courses in medical school,” said Goorman.

“A lot of the liberal arts parts of Calvin were required for pre-med and a lot of the content from those classes are covered on the MCAT, topics that medical schools want to see,” said Charron. “The fact that Calvin already lined up students to take those classes, that was very helpful.”

“I love Calvin’s overall sense that nothing is off limits, that I can be interested in African American history and be interested in medicine,” said Elliott. Also, coming from Colorado, Elliott was excited that her love of the outdoors didn’t have to be put on the shelf during her time at Calvin, in fact, she deepened that passion: going to Northern Ireland and Peru on two separate off-campus programs and she led a number of outdoor recreation trips in Michigan.

“How I developed as a person during my college career was helpful during my interview,” said Elliott.