Calvin partners with school in Liberia to fight Ebola 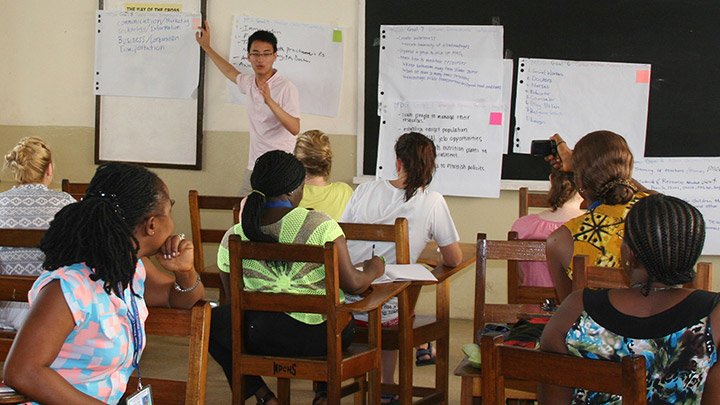 The Calvin community is raising money to buy personal protective suits for social work grads at a partnering school in Liberia.

Being the hands and feet of Christ to a country more than 5,000 miles away is a challenge. Providing protection for the hands and feet is less so. That's what the Calvin community is being asked to provide. “The partnership with the school in Liberia is a great way to say, ‘Ebola is not somebody else’s problem. Ebola is our problem,’” said Calvin College chaplain Mary Hulst.

About seven years ago, Calvin began a partnership and helped to add a social work program at Mother Patern College of Health Sciences, a Catholic school in Liberia. This West African country has been hit hard in the last few decades with civil war and now is being severely afflicted by the Ebola virus. The country is in great need, and because of Calvin’s connection with Mother Patern, Calvin students and alumni have an opportunity to directly help by giving.

The money raised would go to the school, which is working to send social work graduates out into the community. These funds will be used to support educational programming and help buy personal protective suits for those going out into the field.

While in the field, the social workers would work to educate local communities about preventative measures and against the stigma that survivors and family members of Ebola sufferers face. “A lot of Liberians don’t understand Ebola,” said social work professor Joe Kuilema. He has been to Mother Patern multiple times and is working now with campus ministries to raise funds.

Kuilema says it's important that the Liberian graduates are the ones to do the work. “Smaller Liberian communities are very afraid of outsiders and there are language barriers with communicating ideas. They’re using local people to do that work,” Kuilema said.

Graduates from the Mother Patern social work program would also go out and provide grief counseling, trauma counseling and general education about the disease within the communities.

“There are lots of social and cultural dimensions to death,” Kuilema remarked, particularly noting differences in African burial practices. Liberians tend to travel to their home villages in the event of a death and have the practice of washing and preparing bodies for burial which spreads the disease even further. This is very dangerous because Ebola is most contagious immediately after death.

Though Africa is thousands of miles away, this issue is still important at Calvin and directly impacts many students, as well as the body of Christ. “Any time something seems distant and impersonal we have a hard time understanding,” Hulst remarked. “Ebola has the added layer of fear... . Anytime we’re driven more by fear than by the opportunity to extend life to someone else, we’re probably not making the best decisions.”

Giving directly to Calvin’s partnership with Mother Patern helps Calvin students and alumni to practice the habit of giving, according to Hulst. “Developing the discipline of giving is part of our calling as disciples of Jesus Christ.”

Because of the distance from the problem, “People don’t trust that my five dollars really matters,” commented Kuilema. “But money goes a long way. You can have an impact.”

Living our faith together

LOFT and the church season of Advent will kick off the fundraising effort for Liberia. Tying the effort into Advent, a season of expectant waiting and remembering, seemed very fitting to Kuilema. “It feels dark and scary. You get this feeling of wishing someone would come along and fix all this. We’re living into that waiting,” he said.

“This is part of our Advent practice,” Hulst added. “How do we promote the narratives of generosity, compassion and sacrifice, particularly during Advent because that’s when we remember God’s great gift to us.”

You can give to the effort to relieve suffering in West Africa by donating online or at various locations throughout campus.

Calvin College and Mother Patern College faculty and students pose for a photo in 2011.