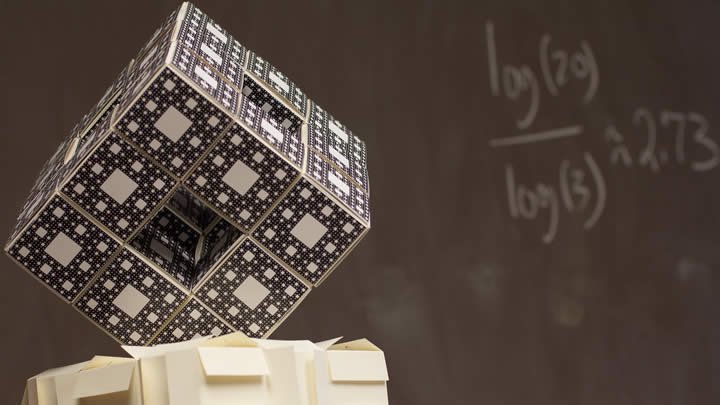 A model of a fractal

Four and a half square feet of business cards is a lot of paper. Folding 160-170 pounds of cards into a physical model of a conceptually infinite pattern, or a fractal, is a lot of work.

Calvin’s mathematics department is joining groups from around the world to construct such a project—a paper sculpture of Menger’s Sponge, a cubic representation of a fractal. The project, the MegaMenger Build, is a global collaboration with mathematicians around the world that gives a physical illustration to a normally abstract concept.

Randy Pruim of the mathematics department said that this project came as a surprise to him, but he has taken the worldwide build head-on.

Click here to learn more about Calvin's project and how you can get involved.

All hands on deck

Pruim hopes to involve those of all ages in the build which includes folding about 70,000 business cards into individual boxes. “I’ve decided to make an adopt-a-block partnership with local high schools. They can adopt a portion of [the block], I’ll give them the supplies and teach them how to do it.” Pruim has also reached out to Grand Valley State University’s math club which will be building portions of the block as well.

During Homecoming weekend students, faculty, alumni and friends will all have the opportunity to be involved in the build at the Spoelhof Fieldhouse Complex and other locations on campus. “Basically anyone who wants to be involved can get involved,” Pruim said. He estimated that it should take about 1,000 man hours to complete the sculpture.

Senior Peter VandeHaar is excited to work with Pruim on this project. “Fractals are what first got me interested in math,” he said. Though the math is exciting, VandeHaar, a computer science major, expressed his greater enthusiasm for working alongside Pruim.

Such a large scale project comes with many challenges and risks. “Part of the excitement of this project is I get the feeling no one knows how this is going to go. Will it collapse under its own weight?” VandeHaar speculated. “That risk makes it really interesting.”

Another challenge of the build is having so many different people learning and building one project. VandeHaar sees this as an opportunity to learn how to teach. Those more mathematically minded follow their instructions while the art majors seem to pave their own road. “Computer science majors follow instructions because if you don’t follow directions in that field it blows up and you end up with misery for yourself. Artists end up in misery if they do follow directions.”

This project allows the mathematics department to have a tangible representation of their work, Pruim said. “Other majors like science get to blow things up while math is mostly done in the head. We don’t have too many artifacts to point to.”

VandeHaar noted that when you spend so much time on a project, you question its validity and your reason for beginning it. However, he sees the MegaMenger Build as a great use of his time. “At colleges like Michigan State, professors only do things that earn them grant money,” he said. “Here it’s things that promote Calvin culture. We’re promoting a culture of curiosity.”