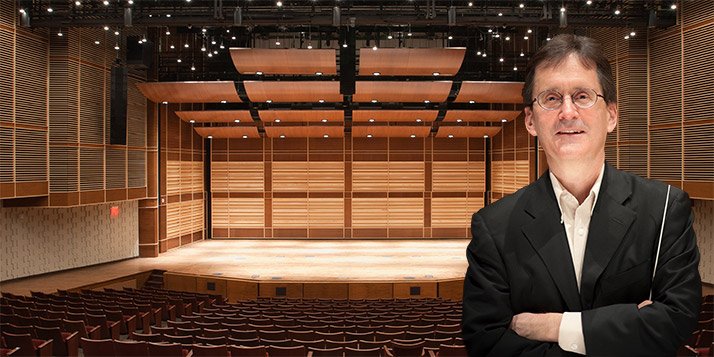 “I like the enthusiasm that youth brings to the discovery of music,” he said about college musicians.

Varineau learned that enthusiasm at his high school in Laramie Wyoming. “I’m just the product of a pretty miserable high school music program led by an extremely dedicated, talented and inspiring music teacher … . They had what you’d call a joy of music,” he said.

He also gained an enduring love of western landscapes. His grandfather was the “first forest ranger in that part of the woods.” His father was a math professor at the University of Wyoming, and his mother was a former Cheyenne Frontier Days Queen.

“I love the wide-open spaces,” he said, “and I love the mountains. It was an adjustment for me to live in a state where my view of the horizon was obstructed.”

Varineau first came to Michigan in 1972 to attend Michigan State University, where a friend shared the gospel with him. “It was on the long, long walk from my science class to our dorm that I accepted Christ as my savior,” he said.

Varineau completed his bachelor’s degree in music back in his home state at the University of Wyoming, then earned his master’s at the Yale School of Music. He has performed as a clarinetist with the New Haven Symphony, the Chamber Orchestra of New England and the Grand Rapids Symphony and with various chamber groups, including the locally based Montage and ma non troppo.

That same year, he began teaching clarinet and music appreciation on an adjunct basis at Calvin. And from 1999 to 2001, he served his first stint as Calvin’s orchestra conductor. He was followed in that job by Robert Nordling, who conducted the Calvin Orchestra from 2002 through this year.

With March performances already on the calendar, Varineau is looking over the orchestras’ repertoire: “It’s important that we teach, quote, 'the canon' of the repertoire but try to keep alive the art form by doing new music,” he said. “We need to play Beethoven and Mozart, of course. We need to play a little bit of Brahms and Tchaikovsky. We need to play Stravinsky. But we also need to play some John Adams."

Varineau is grateful for the chance to teach at a Christian institution. “This is an opportunity not only to live out my life as a Christian within the orchestral world but to foster a Christian mindset within a new generation of performers,” he said.

He hopes to make every composition a living expression of faith: “There’s the great image in Genesis, where God formed humankind out of the dust of the earth ... ,” Varineau said. “As performers we take the dust of composers’ notes, and we are forming that into something new.”

Varineau hopes to continue with his responsibilities with the Grand Rapids Symphony as well as other guest conducting and performing opportunities: “That’s not unusual in the music world,” he said. “Academic scientists teach, and they also research. In the music world, we teach, but we also perform.”

He’s eager to get started: “I love making music,” he said.