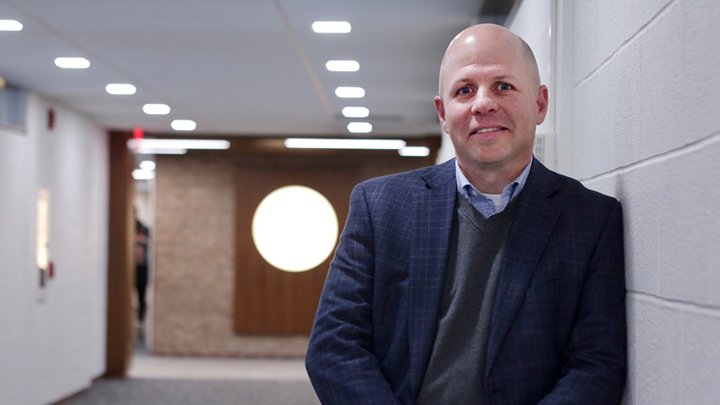 Jim English was recently appointed as Calvin's next vice president for finance.

Calvin University president Michael Le Roy has appointed Jim English as the institution’s next vice president for finance. Le Roy was advised by a nine-member search committee, which included representatives from the university’s faculty, administration, and staff. English was chosen for the position following a rigorous national search.

English assumed the vice-presidential role in December 2019. Prior to joining Calvin, he had served for nearly two decades in assistant and associate superintendent of finance and operations roles for three different school districts across the state of Michigan. He spent the past eight years with Holland West Ottawa Public Schools.

“We are excited that Jim felt called to serve at Calvin at this time. He has a track record of navigating dynamic and changing environments and has made significant contributions in strategic financial planning, budgeting, and project management in K-12 education,” said Le Roy. “We found his grasp of strategic finance to be quite impressive, and we also appreciate that Jim has the heart of a teacher, is committed to empowering teams, and has demonstrated an ability to tackle and solve challenging problems in a spirit of humility, transparency, and grace.”

During English’s tenure at Holland West Ottawa, the school district passed $188 million in bond proposals, invested in and planned for new facilities, while improving existing infrastructure, technology, and transportation. Under his leadership, West Ottawa earned recognition for its improved financial reporting and transparency, realized better value for its health benefits, and created competitive pay structures for its employees.

English says that the significant work that was accomplished at West Ottawa over the past several years was a team effort that was focused on helping the people he served flourish. He sees much synergy as he steps into his new role at Calvin.

“Both in K-12 and in higher ed, the goal is to provide high quality programs for students and to meet their needs for working in the 21st century. Tuition dollars are precious to parents and students, and I don’t take lightly the need to steward those dollars well,” said English. “I also understand that I’m following someone whose done some really good work for Calvin. Sally’s done a great job here and I feel a sense of obligation to live up to the standard that she’s set.”

Sally Vander Ploeg, who retired from Calvin University in December 2019, served the institution for 20 years, the latter seven as the institution’s vice president for finance and administration. During her tenure as vice president, Vander Ploeg helped the university increase its endowment by 60% to $176 million and its net assets by 40% to $350 million. She also worked on the development of a Campus Masterplan (which has and will continue to include physical improvements to the campus), and co-sponsored the sustainability task force whose cost implementation analysis provided the foundation for President Le Roy to sign Second Nature’s President’s Climate Commitment.

“Sally’s record during her two decades at Calvin is certainly impressive,” said Le Roy. “But, it’s not just what she helped the institution accomplish during this time, it’s the way she went about this work that made us better as a leadership team and as an institution. The warm-hearted, collaborative approach that she modeled for our community on a day-to-day basis is something we hope to build upon as we enter this new season.”

“Seeing the giftedness of the leadership of Calvin coming together for the institution’s best these past several years is what gives me confidence moving forward,” said Vander Ploeg. “This is a collaborative community, and one thing I learned during my time here is the more we educate folks and empower them to make the decisions in their areas of expertise, the better off the institution is.”