They've been named for ancient Greek deities, for countries and towns and wives and girlfriends, and even for musicians, including Bach and Tchaikovsky as well as John, Paul, George and Ringo. “They” are asteroids, and according to International Astronomical Association rules, those who discover them, get to name them.

At Calvin, discovering asteroids has become a passion and part of the curriculum, introduced to intro science courses six years ago. Since then, Calvin students and faculty have discovered 263 asteroids in all, including 44 that could be named (to name an asteroid requires that it be tracked over a period of several years to determine its precise orbit). The latest has been named Asteroid Banneker in honor of Benjamin Banneker, a pioneering African American scientist.

Calvin's first named asteroids were Spoelhof and Griffioen, named for former president William Spoelhof and former physics professor Roger Griffioen. The next were Rehoboth and DeYoung, named for Rehoboth, N.M., site of Calvin's remote telescope, via which many of the asteroids have been discovered and a Calvin graduate named Mike DeYoung, who is a teacher at Rehoboth Christian School and who has provided invaluable assistance in maintaining the telescope there.

Now, the name of Calvin’s newest named asteroid departs from the college's history or even any college connections. Instead Asteroid Banneker, discovered in 2005 by Calvin professor of physics Larry Molnar and approved for naming last winter, draws its moniker from a man who lived from 1731 to 1806, but had a late start in life as an amateur astronomer, taking up the pursuit at the age of 57 after being inspired by the "sidewalk astronomy" of a neighbor.

In addition to being an amateur astronomer, Banneker also wrote a series of almanacs that were among the best-selling books of their day. Molnar said that from accounts of those who knew Banneker, he stood out as the "math geek" in his elementary school class and throughout his life he was curious and observant of the natural world around him, seeking understanding in a scientific way.

"In his later years," added Molnar, "when he had a telescope to work with, he enjoyed spending long nights just viewing the heavens. And although, neither a preacher nor a politician, his Christian faith was important to him as was his sense of justice. I identify with every element on this list. At the same time he experienced many significant things I have not experienced. His schooling and his curiosity were limited by the rigors of being a poor farmer. His opportunities were limited by his color; mine have been plentiful. And racial discrimination actually became worse over the course of his lifetime."

Banneker's connections to Maryland were what first led Molnar to investigate the possibility of naming the asteroid in his honor. Molnar grew up in Montgomery County, Md., not far from the place Banneker called home. As a kid Molnar was familiar with the Banneker name. "In some ways he's still a local hero," said Molnar. For Molnar, a Michigan graduate who earned his master's and Ph.D. at Harvard, naming his asteroid after an African-American scientist and celebrating that honor during African American history month, was an easy call.

"I was a little surprised when I saw that Banneker had not been honored yet in this way," he said. "I thought it was a good thing to do, the right thing to do. He's a worthy guy, a guy of great ability in a time and place and class that did not always get the opportunity to express that (ability)."

In proceeding with the idea to name his asteroid for Banneker, Molnar worked closely with the Benjamin Banneker Historical Park and Museum in Baltimore, which was thrilled to hear of Molnar's plans and eager to work with the Calvin professor.

"They were great," recalled Molnar. "And they thought it was really cool that an asteroid was going to be named (for Banneker)."

The museum also worked with Molnar on an appropriate citation for the naming of Asteroid Banneker (when asteroid names are sent to the International Astronomy Union, which gives them a thumbs-up or a thumbs-down, a brief description is sent in with the request which then becomes permanently associated with the asteroid name). Molnar's citation for Asteroid Banneker said: "Benjamin Banneker (1731-1806) was a freeborn African-American farmer, clockmaker, writer and scientist. Self-taught in mathematics and astronomy, he wrote six published almanacs that sold throughout the mid-Atlantic region. He assisted in the 1791 survey of the Federal Territory (the District of Columbia)."

Asteroid lab a rare thing for colleges and universities

And while Molnar is thrilled to have named an asteroid for a somewhat-forgotten scientist he also enjoys the fact that Calvin students and faculty continue to discover asteroids, something he said is pretty rare for a college of Calvin's size, or any college for that matter.

"I think this asteroid discovery laboratory remains a unique component of a Calvin education," he said. "Since it began six years or so ago it still is true that other colleges and universities are not doing this."

When asked why Molnar said simply: "It's hard." But he promised to press on.

"Even our non-majors are doing this," he said, "and we will keep at it. It's cool to discover new things, and it puts us in this place that we get to honor people." 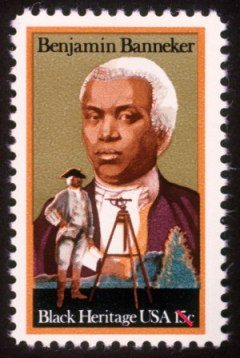 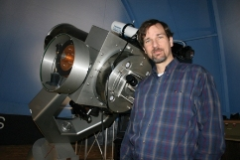