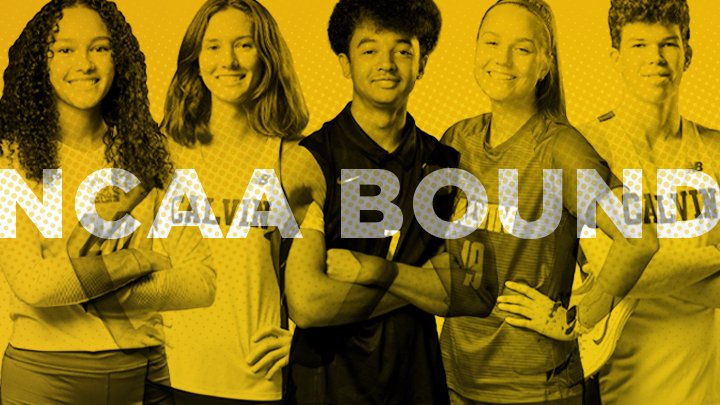 The women's volleyball, men's and women’s soccer and men’s and women’s cross-country teams begin their pursuit of adding another NCAA championship banner to Van Noord Arena.

Knights teams have championship pedigree on their side, having already captured 11 NCAA Division III National Titles in the institution’s storied history (this doesn’t include individual titles won by Calvin athletes). The Knights have also finished in the top four at the NCAA level 54 times in eight different sports, 27 of those as national runners-up.

And the pursuit of another title continues this week and weekend on campus and on the road.

The Knights open the 2022 NCAA Division III Tournament on their home floor in Van Noord Arena as the hosts of an eight-team regional that features six teams ranked inside the AVCA Division III Top 25 poll.

The Knights will travel to a four-team regional on the campus of Kenyon College in Gambier, Ohio. The #6 ranked Knights opening round game is against the Carnegie Mellon Tartans (11-4-1) at 1:30 p.m. EST.

The Knights have beaten the Tartans each of the past two times they’ve played, both in close contests.

The Knights begin their NCAA run in a four-team regional in Pittsburgh, Pennsylvania on the campus of Carnegie Mellon University.

On Friday at 3:30 p.m. EST, the #9 ranked Knights (17-0-1) open tournament play against Nazareth College of New York (8-4-7). The game marks the first-ever meeting between Calvin and Nazareth in women’s soccer.

The Knights are making their second straight NCAA tournament appearance under head coach Emily Ottenhoff. Calvin is making its 13th appearance in the NCAA tournament, reaching the national quarterfinals in 2006, 2009, and 2015.

The men’s and women’s cross-country teams both qualified for the NCAA III Great Lakes Regional Meet scheduled to take place on Saturday, November 12, in Holland, Michigan.

The men’s team recently won its 35th consecutive league title, which is the longest active winning streak among all sports in its league.

For more info on the weekend races, visit the host site's athletics page.

The women’s triathlon team also qualified for the USA Collegiate Triathlon National Championships. They will compete on Saturday, November 12, in Tempe, Arizona.