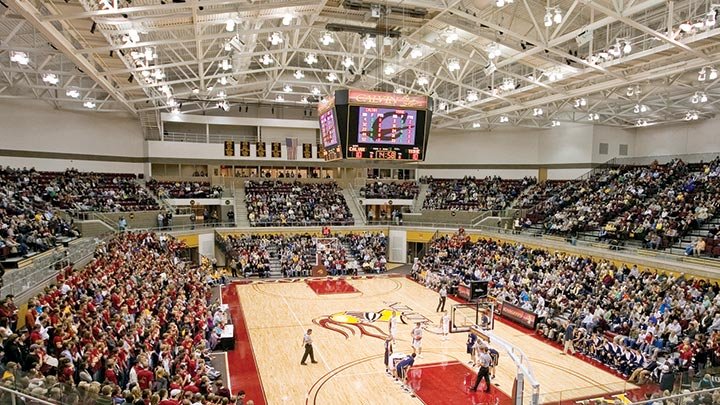 The 4,500 seat Van Noord Arena is home to the Knights basketball and volleyball teams.

For the first time since 1988, Calvin College will be hosting an NCAA national championship. This time, Calvin has joined forces with the West Michigan Sports Commission to host the Final Four for NCAA division III women’s basketball on March 20-21, 2015, at Calvin’s own Van Noord Arena.

Before winning this bid, Calvin hadn’t hosted an NCAA national event since 1988, the eighth consecutive year of hosting the men’s basketball national championship. Calvin also hosted women’s volleyball in 1986. “As the NCAA grew and as the obligations to host grew, we were a little more content with hosting on the regional level. And we’ve done a lot of that,” said Nancy Meyer, Calvin College director of athletics and the tournament manager.

When Van Noord Arena was built in 2009, hosting on the national level again became more of a possibility. “The new building was definitely an impetus. And we were getting pressure not only from the NCAA but from visiting teams,” said Meyer. “We have a great indoor venue to host. It was only a matter of time.”

Co-host West Michigan Sports Commission (WMSC) has played a key role in bringing a national championship to Calvin. “They weren’t just going to slap their name on it. They came to us and really wanted to partner with us,” said Meyer, a member of the WMSC advisory council. It was WMSC who actually completed the bid process.

Supported by West Michigan businesses, WMSC puts the spotlight on the region as a premier venue to host a variety of sporting events and assists institutions in hosting these events. Getting teams and spectators to come enhances the region’s economy and quality of life.

A benefit to the community

“The NCAA events are a win-win all around for our region–they not only attract some of the top collegiate athletes to our backyard for exciting sports tournaments, but they directly support our local economy by bringing teams and their travel parties to stay in our hotels, eat in our restaurants and patronize our stores,” said Mike Guswiler, WMSC president.

According to WMSC, this year’s women’s basketball national championship hosted at Calvin will bring Grand Rapids an estimated economic impact of $625,000.

An event like this one is not only beneficial to the community, but it is also great for the host of the tournament. While Meyer indicated that hosting a national championship is not a money-maker in the short run, it does expose Calvin and its caliber of facilities to potential recruits and builds up name recognition among high school and travel-league players and coaches.

“Our admissions and advancement offices have always been about getting feet on campus,” Meyer pointed out. “If we can just get people on campus, that’s great exposure. They’ve been great partners.”

All hands on deck

The external support from WMSC and the volunteers that they send, and the internal support from Calvin staff and students is what makes this event possible. “It does take a lot of human hours,” said Meyer. “Our staff is extraordinary. They just have a servant mentality.”

A committee was formed and has been meeting since last summer to plan and run the event, which includes much more than simply overseeing the three basketball games of the Final Four. The committee represents advancement, campus events, campus safety, communications and marketing, the athletic department, athletic training, students and the WMSC. Committee members lead subcommittees that complete a variety of assignments, including but not limited to planning both a banquet and a social outing for the teams prior to the tournament, setting up contracts with hotels, organizing a project with Special Olympics, ticketing, marketing and media. “There’s a reason why schools choose not to do this,” noted Meyer, emphasizing the amount of work it takes to pull off the event.

As the tournament manager, Meyer is “second in command” to tournament director James Timmer Jr., Calvin director of athletics. “He really is the brains behind this,” said Meyer. “He’s very visionary, very creative. I’m kind of catching the excitement by going through it with him.”

“I’m very passionate about division III athletics,” said Timmer. “We have great facilities and a great staff, and I feel that because of that, we should give back.

“The most rewarding part is the student athlete experience; watching all of their hard work come to fruition,” added Timmer. “We hope to give them a championship experience they won’t forget.”

A national venue for years to come

Though Meyer and Timmer are excited to usher Calvin in as an up-and-coming venue for national athletic events such as these, they are happy that they won’t have to pull off two in the same school year. There is no significant downtime in their foreseeable future.

“As soon as we’re done with this one, we start working on volleyball,” said Meyer with a laugh.