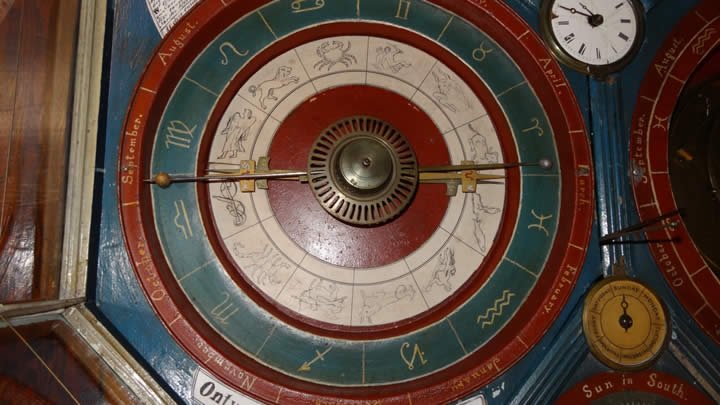 A recent total lunar eclipse drew 170 people to the Calvin College observatory for a viewing party that lasted nearly three hours. During that time, attendees were given a special look at an antique piece of equipment used to predict eclipses.

That piece of equipment is the Botjes planetarium, built in 1868 and donated to Calvin College in 1992, when it was restored to working condition by Clarence Menninga, professor of geology, emeritus.

"I am quite sure that it had not run for at least 25 years when it was given to Calvin," Menninga said.

Menninga spent hours filing gears by hand to repair the mechanism, as well as replacing parts and, with the help of a machinist, creating an electric method to wind the planetarium so it would keep time on its own.

Larry Molnar, professor of physics and astronomy and head of the Calvin observatory, hosted the lunar eclipse open house on Sept. 27 in which the planetarium was featured.

“We consider it a privilege to share God’s universe with the general Calvin community and the broader Grand Rapids community,” Molnar said. “The psalmist says, ‘The heavens declare the glory of God,’ and I always think to myself, ‘It’s only good if you’re listening and watching.’”

Molnar counts among his responsibilities the maintenance of the Botjes planetarium, which contains a sun-moon dial that accurately predicts the timing of eclipses.

“There’s an extra dial on the sun-moon dial, which is known as the line of nodes, that says if you’re at full moon and you’re on this dial, then you will get an eclipse,” Molnar said. “What happened this past Sunday (Sept. 27) is we had a full moon, and it was near the line of nodes, and so it was an eclipse. And, it was near the point of closest approach to Earth, hence it was a supermoon, which is a bigger-than-average moon.”

When Molnar took attendees to the hallway in the Science Building where the planetarium is displayed, the lunar eclipse was well underway. Four different indicators on the sun-moon dial had lined up perfectly.

“That’s fairly rare,” Molnar said. “Every month, two of the indicators line up, but to get all four of them—that’s every 30 or 40 years.”

The planetarium is run by an antique clock and a set of finely tuned gears powered by a mainspring.

“It’s kind of fun, because if there’s a power outage, all the clocks on all the classroom walls, they will all be wrong by an hour if the power’s out for an hour,” Molnar said. “But the planetarium, since it’s running on its own spring energy, it doesn’t lose an hour.”

For their classes, Calvin astronomy students use a planetarium software program called The Sky to perform complex calculations. But Molnar said the trouble with software programs is they are constantly becoming obsolete as technology changes. One of Molnar’s favorite things about the Botjes planetarium is that it never grows obsolete.

“This thing has run almost 150 years, and it still gives the right answer, as we showed on Sunday,” he said. “There’s something about a device that has that kind of longevity that is worth pondering."

Another reason Molnar said the planetarium is important is that it makes a visual point about creation that software does not.

“I think this was in the mind of Botjes and other planetarium makers in The Netherlands at the time. And that is that God has created an orderly universe and designed it with good intent.”

The high attendance rate of the Sept. 27 viewing event was remarkable because it wasn’t a particularly clear night to be able to see the eclipse until it was nearing the end, Molnar said.

“I was amazed to see many, many people came even while it was cloudy, hoping that it would clear up in time,” he said.

Molnar said he is pleased to be able to introduce groups to an experience that may often be unfamiliar.

“People are interested in the world around them but so often have never seen it,” he said. “If you grew up in a city, you’re just not aware of what’s in the sky above you. So to come either to look through the telescope or to stand on our observing deck and just learn about the constellations is often an eye-opener for many people.”

The Calvin observatory is open to the Calvin community a half-hour past sunset on clear nights Monday through Thursday and to the general public each Wednesday evening. There is no charge for admission.