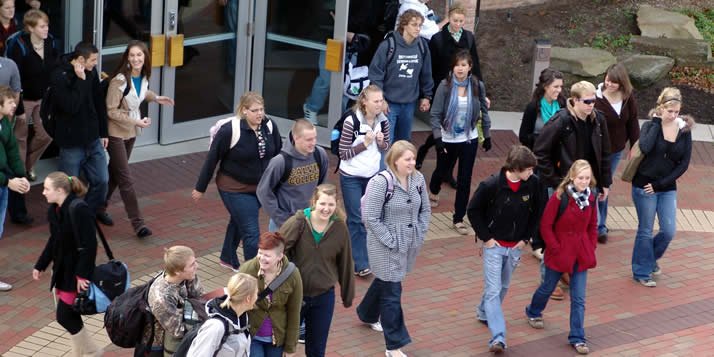 For the second year in a row Calvin College is ranked number two in its category in the annual U.S. News & World Report college guide.

For the second year in a row Calvin College is rated the second-best college in its category in the annual U.S. News & World Report college guide.

Calvin is number-two in "Best Midwest Comprehensive Colleges" according to the 2006 edition of "America's Best Colleges," the annual U.S News guide slated to hit newstands next week. There are 108 schools in Calvin's category, colleges and universities that focus on undergraduate education and offer a range of degree programs - in the liberal arts, which account for fewer than half of their bachelor's degrees, and in professional fields such as business, nursing and education.

For 2006, St. Mary's College in Indiana is again the top-rated school in Calvin's category, while Taylor, Ind., is third. St. Norbert, Wis., again is fourth this year, while Ohio Northern and Otterbein, Ohio, are fifth and sixth respectively. A quartet of Iowa schools - Wartburg (7th), Simpson (8th), Central (9th) and Dordt (tied for 10th with Augustana, S.D.) - round out the top 10.

Interestingly the top four schools in Calvin's category all have strong religious ties. MIAA colleague St. Mary's is a Catholic women's college, Calvin is part of the Reformed tradition of historic Christianity, Taylor is an interdenominational, evangelical college and St. Norbert is a Catholic college in the Norbertine tradition.

Calvin was included in "Undergraduate Research/Creative Projects" as part of a group of colleges that excel in helping students to do intensive and self-directed research or creative work that results in an original scholarly paper or other product that can be formally presented. Other state schools that received kudos in that category include Hope and the University of Michigan.

Calvin vice president Tom McWhertor says that Calvin's U.S. News category of Midwest Comprehensive Colleges includes a number of top-notch academic institutions. He adds: "We're happy to be recognized as one of them."

Calvin director of admissions Dale Kuiper concurs, but also says that that college rankings should never be seen as the primary means by which prospective students and their parents measure a college's quality.

"The various rankings, like this U.S. News guide, do provide a helpful service," he says, "if they are not taken too seriously. The data they provide can be helpful to high school students, parents, guidance counselors and others. It provides a convenient collection of criteria like graduation rates, first-year retention rates, size of classes and student-faculty ratio. But those are only a few of the many ways that should be used to measure whether a student will fit well with a particular college."

Calvin scored the best of any school in its category in peer assessment, a rating that measures what presidents, provosts and deans of admissions at Calvin's competitors think of the school's academic programs. Kuiper was pleased by that, noting that to be recognized positively by one's peers is encouraging.

Calvin also scored high in its category in percentage of faculty who are full-time (91%), freshman retention rate (87%), graduation rate (73%) and alumni giving rate (31%).

U.S News & World Report has been ranking colleges since 1983 and its survey is widely considered to be one of the most thorough. The survey ranks colleges on academic reputation, graduation and retention rates, faculty resources, student selectivity, financial resources and alumni giving. Calvin has been a top-ranked school 18 of the last 20 years.

And in Best National Liberal Arts Colleges, Kalamazoo was tied for 55th, while Albion was tied for 84th and Hope and Hillsdale were tied for 94th and 104th respectively.